An extract from 'Ingenious Ireland', Mary Mulvihill, 2002, Dublin. Town House - Copyright of the Mary Mulvihill estate and reproduced here with their kind permission

'The quantum world of paritcle physics is weird. Very weird. So weird, in fact, that even Einstein could not accept it. One of the people instrumental in uncovering that weirdness was a brilliant Belfast scientist John Bell (1928-90). Bell studied science at QUB, but spent most of his working life at CERN, the particle physics laboratory in Geneva. He made many important contributions, often collaborating with his wife Mary Ross, who was also a physicist, but he is best known for an idea he proposed in 1964.

First, a little history. In 1935, Albert Einstein, Boris Podolsky and Nathan Rosen drew attention to a paradox in quantum theory. If twin particles, say for example two particles of light (photons), were to be emitted from a single source, and fly off in opposite directions, the properties of one would still depend on the properties of the other - the are 'entangled'. In the bizarre world of quantum mechanics some of the properties are not concretely realised until they are actually measured - until then they do not have a concrete existence - yet they are still entangled. Measure the properties of one particle, and quantum theory predicts you will instantly know the properties of the other, as if information had passed between them faster than the speed of light. Einstein called this 'spooky action at a distance', and thought it most unlikely.

John Bell proposed a way to explore this apparent paradox, but it was 20 years before physicists, led by Alain Aspect at Orsay in Paris, could attempt the experiment: they created pairs of photons, separated the twins, and sent each flying on its separate way; but when they measured the polarisation of one photon, the instantly knew the polarisation of its twin. This proved that John Bell was right, and Einstein was wrong - the world really is spooky, weird and entangled.

Bell is also known for pioneering work in elementary particle physics where he helped explain (along with two US physicists, Stephen Adler and Roma Jackiw) why a particular sub-atomic particle, a neutral pion, spontaneously explodes into two photons - though the prevailing ideas said this should not happen so quickly. Their explanation uncovered a subtle quantum effect (the Adler-Brll-Jackiw anomaly), which is central to all modern attempts to unify the forces of nature. Bell was awarded many international honours, and had been nominated for a Nobel Prize, but died suddenly of a stroke in 1990.' 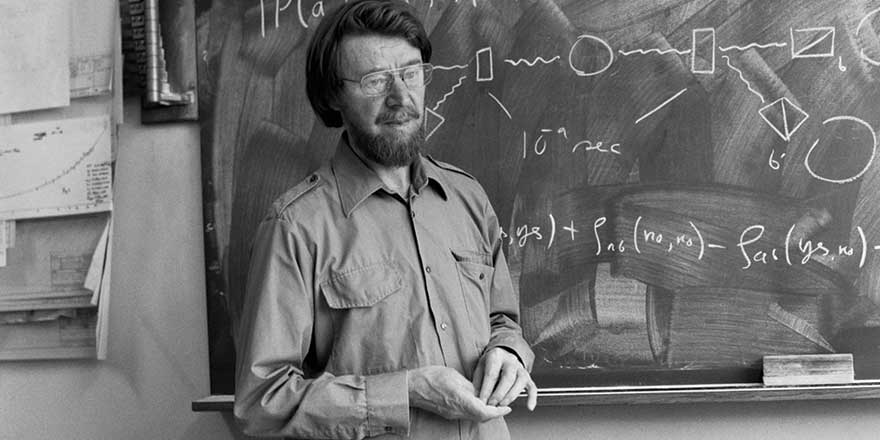 From the Dictionary of Irish Biography, http://dib.cambridge.org/

John Bell died of a stroke at his home 1 October 1990 in Geneva, aged 62. The proceedings of a conference to commemorate his life's work were published in Quantum [Un]speakables from Bell to quantum information (2002). The Institute of Physics, who had described him as one of the top ten physicists of the twentieth century, mounted a plaque commemorating his pioneering work and contribution to science on the old physics building of QUB (2002). According to Andrew Whitaker (1998), biographer of Bell, his work has ‘changed our perception of physical reality and the nature of the universe’.