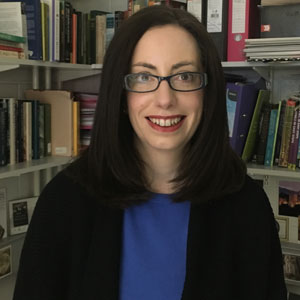 Annaleigh Margey is a Lecturer in History at Dundalk Institute of Technology. Originally from Letterkenny, she studied for her BA and PhD at NUI, Galway. Her PhD research titled ‘Mapping during the Irish Plantations, 1550-1636’, focused on the surveys and maps created in Ireland during the decades of plantation. She subsequently held an Irish Research Council Postdoctoral Fellowship and a J.B. Harley Fellowship in the History of Cartography to continue this research at Trinity College Dublin. More recently, Annaleigh has worked as a Research Fellow at the University of Aberdeen on ‘The 1641 Depositions Project’ and at the Institute of Historical Research, London, conducting research on the property and charity of the Clothworkers’ Company in early modern London. She has also worked as a Research Fellow on a joint project with NUI, Maynooth and the National Library of Ireland focusing on the rentals and maps in the landed estates’ collections in the library’s holdings. She has published books and articles on early modern Ireland, including an edited volume, The 1641 Depositions and the Irish Rebellion, with her colleagues Elaine Murphy and Eamon Darcy. Her book Mapping Ireland, c.1550-1636: a catalogue of the manuscript maps of Ireland will be published by the Irish Manuscripts Commission in late 2018. Most recently, she has been a contributor to The Cambridge History of Ireland, vol. II and has worked on a cross-border project with Armagh Robinson Library and Marsh’s Library, Dublin to digitise, and exhibit, the map holdings of the two eighteenth-century libraries.