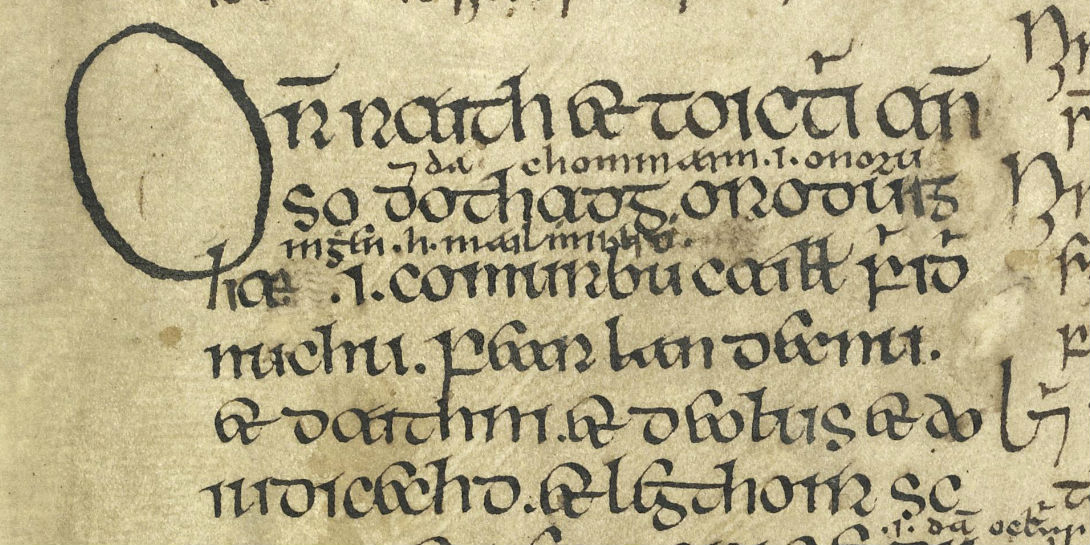 The Book of Fenagh (RIA MS 23 P 26), an Irish manuscript commissioned in 1516, tells the story of the life of St Caillín, founder of an early Christian monastic community at Fenagh. The manuscript reflects the politics of early sixteenth-century north Connacht, with the saint’s life being used for propaganda purposes. It is the work of an expert scribe, Muirgheas Ó Maoilchonaire, and is an excellent example of late medieval Irish manuscript production. The exhibition in the Academy Library tells the story of scribes and scholars associated with the manuscript.

The medieval vellum manuscript known as the Book of Fenagh was compiled in 1516 in what is now County Leitrim. Written in the Irish language, it was commissioned by Tadhg Ó Rodaighe, hereditary coarb of St Caillín in Fenagh (Fiodhnachta Maighe Réin). The Book of Fenagh remained in the hands of the Ó Rodaighe (Roddy/Rodaghan) family down to the 1830s. In the early nineteenth century it was used locally for swearing oaths when agreeing binding contracts.

The manuscript contains a life of St Caillín, believed to be a disciple of St Colum Cille, in prose and verse. Caillín was patron saint of the powerful Uí Ruairc (O’Rourke) family, and his church was an important one. Much of the saint’s ‘life’ in the Book of Fenagh consists of lists of lands, privileges and dues claimed by Fenagh. The book also contains historical lore relating to the two territories of Breifne, now Counties Leitrim and Cavan. Some early poetry in the manuscript relates to the politics of Tír Chonaill in the eleventh to thirteenth centuries. 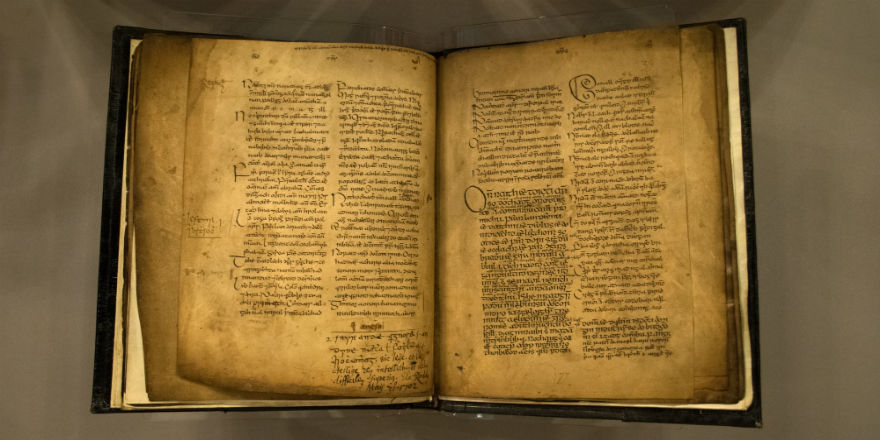 The scribe was Muirgheas Mac Phaidín Uí Mhaoil Chonaire (d.1543), of the famous north-Connacht learned family. The Book of Fenagh is quite a lavish manuscript on 41 large vellum leaves measuring 30 cm x 23 cm. The writing is mostly in double columns. There are some decorated capital letters, filled in red, though some of the work on capitals is unfinished. Each page can be viewed in the online digital version at Irish Script On Screen.

Life of St Caillín, derived indirectly from the Book of Fenagh

This copy was made before some leaves of the 1516 manuscript were lost, and thus preserves the complete text of the life of St Caillín as compiled by Muirgheas Ó Maoilchonaire.This paper MS was transcribed from a MS written for Brian Ballach Ó Ruairc. It belonged to Aodh Ó Ruairc, grandfather of Charles O’Conor, in 1684.  This manuscript remained in Connacht until the late eighteenth century, and was acquired by Charles O’Conor of Ballinagare. It was in the library of the Duke of Buckingham at Stowe in the nineteenth century. It was purchased for the Royal Irish Academy in 1883 as part of the Stowe/Ashburhnam collection. 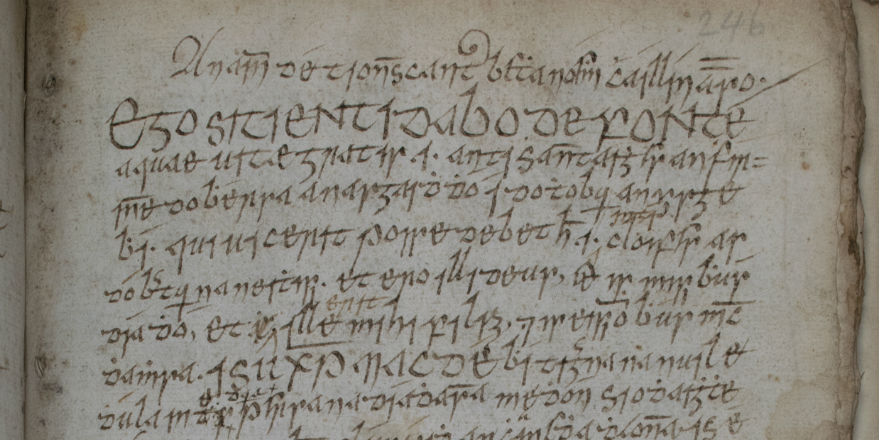 When Rev. Dr. Charles O’Conor wrote a description of this MS in Bibliotheca MS Stowensis, vol 1, p. 115, no xxii, he apparently believed it was the original Book of Fenagh.

Poems on the O’Donnells, copied by Mícheál Ó Cléirigh from the Book of Fenagh.

This is a historical miscellany on Irish secular history compiled by Mícheál Ó Cléirigh in the late 1620s while he travelled throughout Ireland searching out source manuscripts on the lives of Irish saints. Ó Cléirigh had a particular interest in the history of the O’Donnells, his family’s patrons. This manuscript was in the possession of Roderick O’Flaherty in 1672 and was later acquired by Charles O’Conor of Ballinagare. 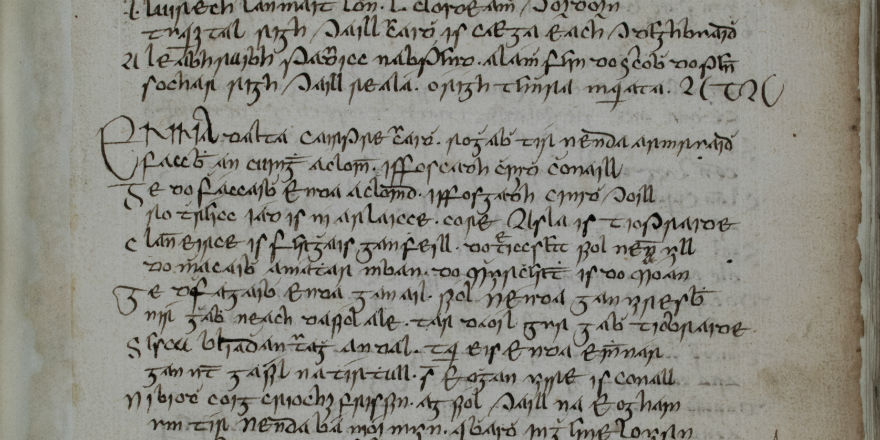 Míchéal Ó Cléirigh made a copy of the life of St Caillín in December 1629, from an earlier draft he had made from the Book of Fenagh. His manuscript is now in the Royal Library, Brussels. (Brussels, Bibliothèque Royale, MS 2324-40)

Annals of the Four Masters

These Annals are a chronicle of Irish history from A.M. 2242 to A.D. 1616 and contain records under successive years of the deaths of kings and other prominent persons, both ecclesiastical and lay, along with accounts of battles, plagues, etc. They end with the death of Hugh O’Neill, earl of Tyrone, in 1616. The Four Masters recorded the death in 1543 of Muirgheas Ó Maoilchonaire, the historian and scribe who compiled the Book of Fenagh in 1516.

These annals were compiled in the 1630s and comprise a record of Irish history from the time of Noah’s Ark down to 1616. The compilation was largely derived from older manuscripts, many of which have not survived. The team of scholars who wrote the Annals of the Four Masters were a Franciscan brother, Mícheál Ó Cléirigh, and three laymen, Cú Choigcríche Ó Cléirigh, Fearfeasa Ó Maoilchonaire of Co. Roscommon, and Cú Choigcríche Ó Duibhgeannáin of Castlefore, Co. Leitrim. Two others also took part in the compilation of the Annals, Conaire Ó Cléirigh (an older brother of Mícheál) and Muiris Ó Maoilchonaire. The various hands are clear, legible and swiftly written with a pointed quill.

‘Maurice, the son of Paidin O'Mulconry, a man learned in history and poetry, a man of wealth and affluence, a learned scribe, by whom many books had been transcribed, and by whom many poems and lays had been composed, and who had kept many schools superintending and learning, several of which he had constantly kept in his own house, died, after having gained the victory over the Devil and the world.’ 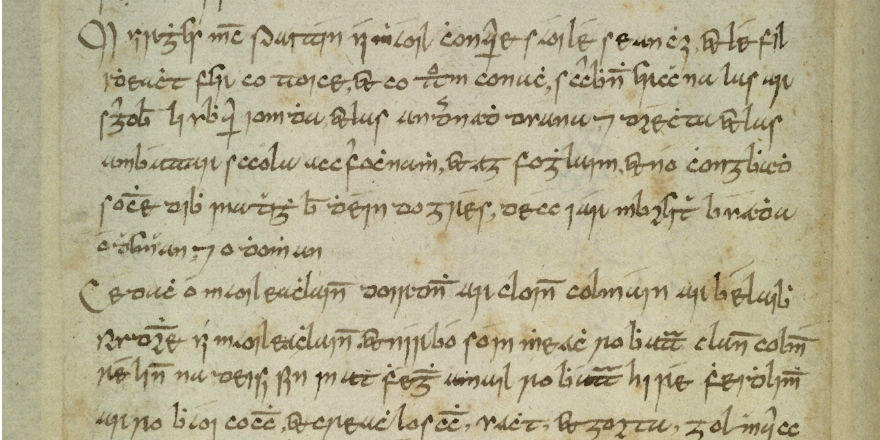 The annals of Connacht were compiled in the early sixteenth century. They are ultimately derived from an Ó Maoilchonaire chronicle. An obituary for Muirgheas Ó Maoilchonaire, scribe of the Book of Fenagh, is included at the year 1543.

‘Muirges son of Paidin son of Lochlainn son of Maelsechlainn O Mailchonaire, ridge-pole of History, bower of Poetry, revealer of all knowledge and wisdom to the disciples, chief institutor of learning in all the arts, a charitable, humane, rich, prosperous man, died with Unction and Penance, having triumphed over the world and the Devil, and was buried under the protection of God and Patrick at Elphin.’ 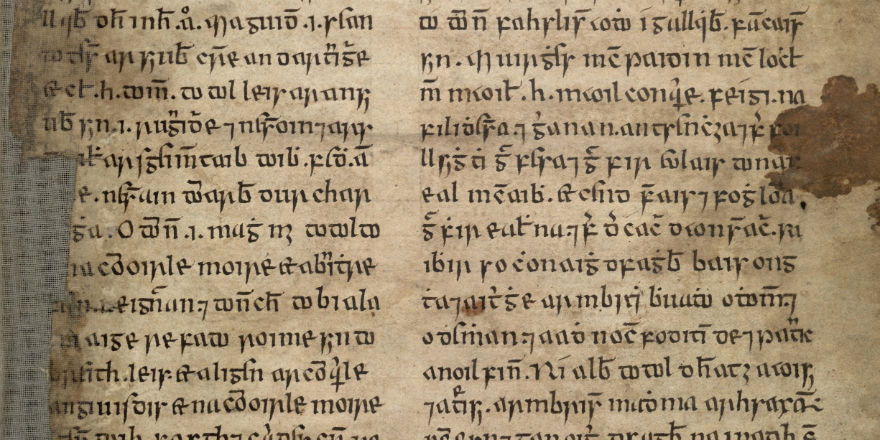 John O’Donovan’s facsimile copy of the Book of Fenagh, 1828

When John O’Donovan transcribed the Book of Fenagh in 1828, at folio 40 he even recreated the hole in the vellum, on folio 40 of the original! This version, rather than the original 1516 MS was used by the editors, William Hennessy & Denis Kelly, as the basis of their edition and translation in 1875. A later copy of John O'Donovan's transcript, with expansion of contractions by Michael Mc Dermott and translation into English by D. H. Kelly, completed in 1857, is now in John Rylands Library, Manchester (Irish MS 16-17). Other nineteenth-century copies of the Book of Fenagh are now Queen’s University, Belfast (MS 1/3); and St Patrick’s College, Maynooth (Renehan MS 53A). 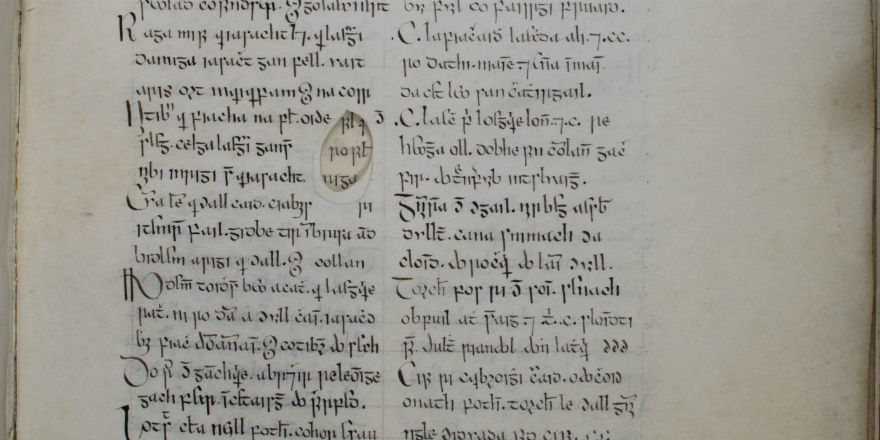 A volume of extracts and notes of archaeological and historical interest, compiled by George Petrie, containing passages from the Book of Fenagh and Book of Lecan transcribed and translated by John O'Donovan in 1830.  George Petrie, MRIA, artist and antiquary, worked to enhance the Academy’s manuscript and museum collections, and employed John O’Donovan on a variety of research projects. Artefacts such as ‘Clog na Ríogh’ were of particular interest to him. 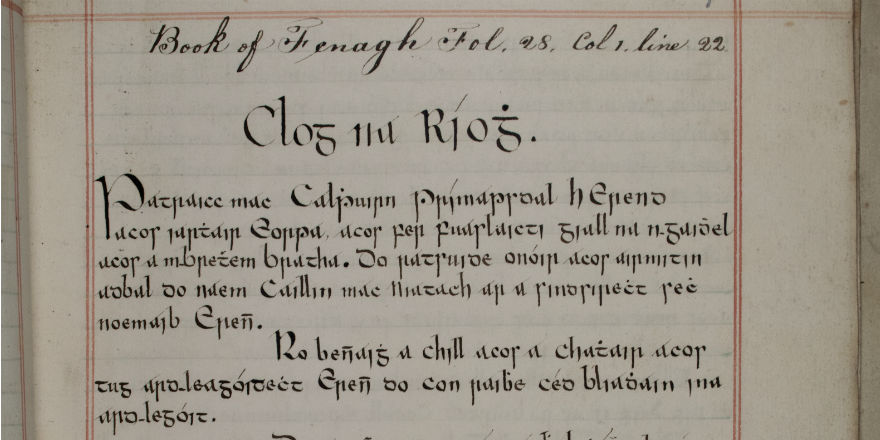 English translation of Book of Fenagh, 1830

John O’Donovan collaborated with Edward O’Reilly on this partial translation of the Book of Fenagh and was presumably employed by O’Reilly to do the work. Among the scholars who had access to this copy were J. H. Todd and Charles Haliday. It came to the RIA library with the collection of Charles Haliday, presented by his widow, Mary, in 1867. 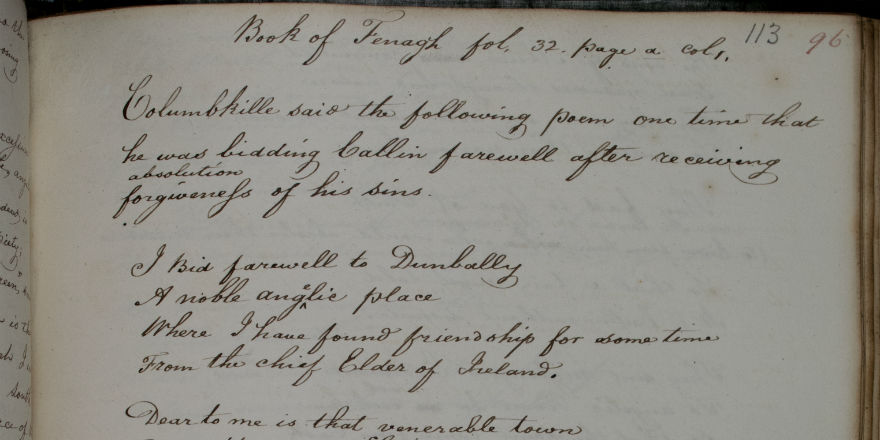 Printed edition of Book of Fenagh, 1875

The Book of Fenagh in Irish and English, originally compiled by St. Caillin, Archbishop, Abbot, and founder of Fenagh, alias Dunbally of Moy-Rein, Tempore St. Patricii; with the contractions resolved, and, (as far as possible), the original text restored / carefully revised ... by W. M. Hennessy, MRIA,  and done into English by D. H. Kelly, MRIA (Dublin, 1875).

Denis H Kelly, a scholar and landowner from Castlekelly, County Roscommon, had completed a translation of the Book of Fenagh in 1857. Through collaboration with W. M. Hennessy, an archivist at the Public Record Office in Dublin, the text and translation were published in 1875. The publication was supported by Edward and Louisa Tenison of Kilronan Castle, and the illustrations in the book are based on their early photographs of Fenagh. A collection of Lord Tenison’s original photographs is now in the National Photographic Archive (National Library of Ireland). 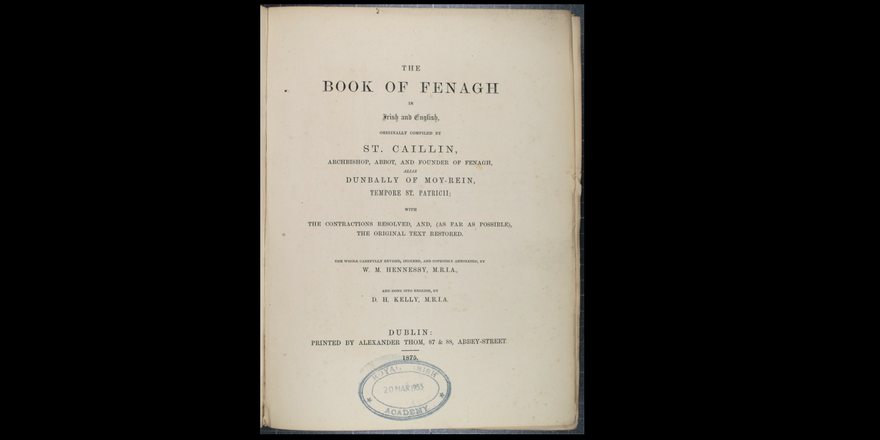 Commemorative publications and events in Fenagh and Dublin, 2016 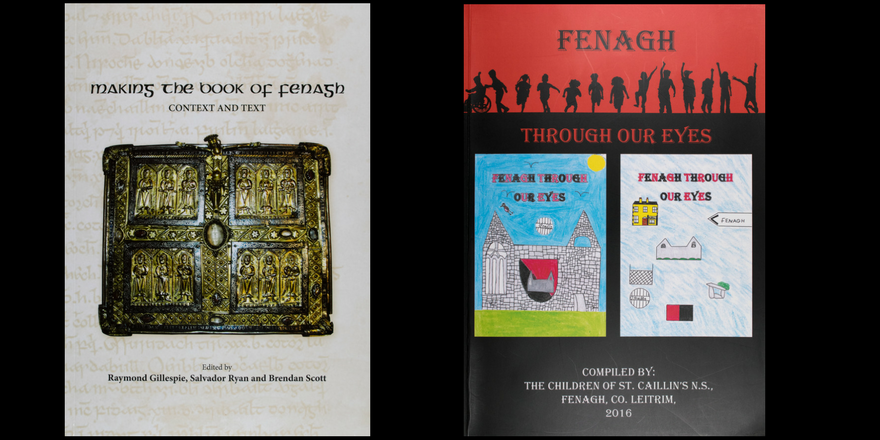 Two lunchtime lectures on topics related to the Book of Fenagh exhibition were held in Academy House:

Wednesday, September 21 13:00 : 'The shrine of St Caillín of Fenagh and its place in Irish late medieval art' Lunchtime Lecture by Dr Paul Mullarkey, National Museum of Ireland. Listen back to Dr Mullarkey's lecture here. Images referred to in the lecture available here.

The Book of Fenagh has been digitised and can be viewed online at www.isos.dias.ie.