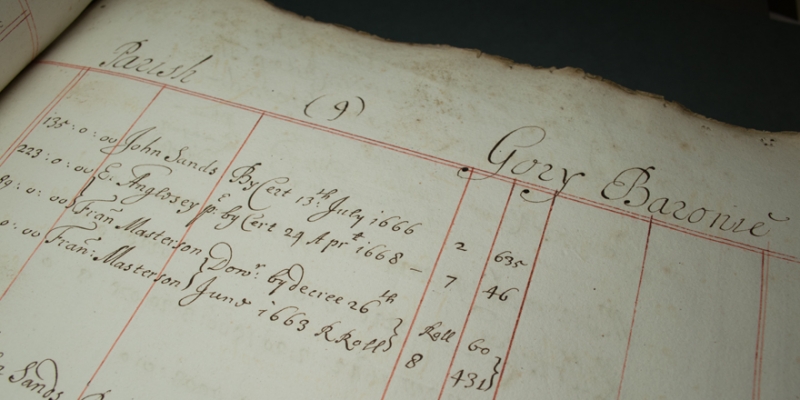 Books of Survey and Distribution

The seventeenth-century Books of Survey and Distribution in the Royal Irish Academy are preserved as a set of sixteen bound, large folio manuscript volumes. These Books of Survey and Distribution were commissioned circa 1674 by Arthur Capel, earl of Essex, for the purpose of discovering concealed lands (Tallon, 109). These manuscripts were compiled by Thomas Taylor and they record changes in landownership in the decades after 1640. Taylor completed this set in 1675.

Thomas Taylor had been a sub-commissioner in the Court of Claims in the 1660s, and served in the administration of Arthur Capel, earl of Essex in the 1670s (Cunningham, 136–7; Tallon, 109). The first Court of Claims had been established to hear property claims made under the terms of the Act of Settlement. It commenced operations in September 1662. A second Court of Claims opened in January 1666 after the passing of the Act of Explanation in 1665, designed to release one-third of the landholdings of Cromwellians for restoration to Catholics. Arising from his work on Sir William Petty’s Down Survey and then for the Court of Claims, Taylor had expertise in recording data on Irish landownership.

In the Books of Survey and Distribution, the data for each county are arranged barony by barony, and parish by parish within each barony. Each book lists the names of proprietors in 1641, the townland or other land denomination, the acreages of profitable and unprofitable land, and the names of those to whom specific lands were transferred in the later seventeenth century after the Restoration.

Royal Irish Academy ‘Taylor’ set of the Books of Survey and Distribution:

The counties no longer included in the set of the Books of Survey and Distribution held by the RIA are Clare, Galway and Roscommon. These counties are catered for however, in the published editions prepared by R. C. Simington and published by the Irish Manuscripts Commission, from the Quit Rent Office set held by the National Archives, Dublin (NAI). Four western counties – Clare, Galway, Mayo and Roscommon – have been published by the Irish Manuscripts Commission. The RIA Library holds printed copies of Simington’s edited volumes. The volume for Clare is a facsimile edition (Simington, 1949, 1956, 1962, 1967).

Simington’s editions are based on the Quit Rent Office set of the Books of Survey and Distribution in the National Archives of Ireland. He provides detailed explanations of the source in his introductions to the published editions. Some of Simington’s conclusions are modified slightly by Geraldine Tallon in her comparison of the variant surviving sets of the Books of Survey and Distribution for the county of Westmeath (Tallon, 1978).

The Annesley set of the Books of Survey and Distribution were purchased by the Public Record Office of Northern Ireland from the Annesley family in 1964. (Microfilm copies are held by the National Library of Ireland.) The detail recorded in the Annesley set is closely related to the Quit Rent Office set.

In comparing the various surviving sets of the Books of Survey and Distribution, using the evidence for Westmeath, Geraldine Tallon has suggested that it is not appropriate to suppose that one set is more correct than another. Rather, the original purpose for the compilation of each set must be considered.

‘The interest of the earlier group [Taylor/Headfort] seems to be in survey, forfeiture, and, of course, the earlier settlement data, and that of the later group in settlement data (including unforfeited lands) and financial liability. The weight of emphasis in the earlier group therefore falls on the 1641 situation, and in the later group on the 1670s and ‘80s. Each of the five Books is a reflection of its administrative context, and while the varying needs of the administration over a period of time cannot explain the origin of the differences in the Books, it can go far towards rationalising their presence and affirming their value.’ (Tallon, 114–15).

Tallon also suggests that there may have been two versions of the Down Survey in use in relation to the land settlement. The Down Survey was conducted by Sir William Petty in 1656–8, and surveyed the extent, value and ownership of land in most Irish counties. Maps were prepared to accompany the data gathered, with Thomas Taylor serving as Petty’s chief cartographer. The surviving evidence from the Down Survey has been made available online by Trinity College, Dublin.

The Taylor set of the Books of Survey and Distribution now in the RIA survived in Arthur Capel’s library. They remained in the possession of successive earls of Essex down to the early nineteenth century (Tallon, 109). Each volume in the Taylor set has a bookplate of ‘Rt. Hon. Algeron Capell, Earl of Essex’, dated 1701. These volumes were later acquired by the Duke of Buckingham and were sold to the earl of Ashburnham in 1849. They were part of the collection of Stowe/Ashburnham manuscripts of Irish interest purchased by the British Government and deposited in the Royal Irish Academy in 1883.

Further reading and editions of sources: