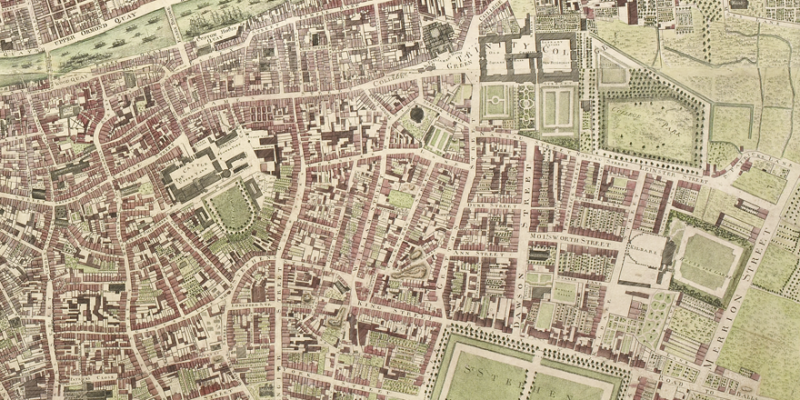 Colm Lennon on the 'town in the eighteenth century'

The series continues with the town in the eighteenth century by Colm Lennon, author of IHTA no. 19 Dublin, part II, 1610 to 1756 (Royal Irish Academy, Dublin, 2008). In this essay, Lennon discusses the eighteenth-century town in the age of improvement.

The town in the eighteenth century

By contrast with previous relatively haphazard patterns of urban development, the eighteenth-century Irish town manifests the effects of enlightened planning both on the part of urban landlords and, in the case of the metropolis, state and civic authorities. Maynooth and Dundalk bear the imprint of the improvements envisioned by the Fitzgerald and Hamilton families respectively, as new streets and squares were laid out, aligned with stately residences as well as interconnecting regional roadways.

Public amenities erected included market-houses, schools and inns. Dublin shared with Maynooth the shaping vision of the duke of Leinster whose town house was at the hub of a fashionable south-eastern suburb, while matching this on the north side of the city, the Gardiner suburb emerged in the ensemble of boulevards and squares of which Sackville Mall, later Sackville Street, formed the core.

Extracts of Leinster House and part of the Gardiner suburbs on John Rocque's Exact survey of the city and suburbs of Dublin, 1756 (courtesy of Trinity College Dublin).

Dublin benefited from the government’s aspirations to design a fitting national capital. Grand buildings such as the Royal Hospital and Royal Barracks came to grace the western approach, while in the centre there were clustered the seats of executive, judicial and legislative power in the forms of the refurbished Dublin Castle, and the new Four Courts and Parliament buildings. Municipal pride was reflected in a new city hall or tholsel, while mercantile wealth revolved around the Royal Exchange and Gandon’s Custom House. Urban planning was from the 1750s essentially the responsibility of the Wide Streets Commissioners, who were charged with co-ordinating the development of the various new quarters and thoroughfares.

Extracts of the vignettes and prospect from Charles Brooking's Map of the city and suburbs of Dublin, 1728 (Royal Irish Academy Library)

Major infrastructural projects marked the eighteenth-century era in town and city. In Dundalk the development of a new harbour with facilities such as a pier bespoke the commercial ambition of the local landlords and manufacturers, and in conjunction with this scheme, the South Marsh was drained. 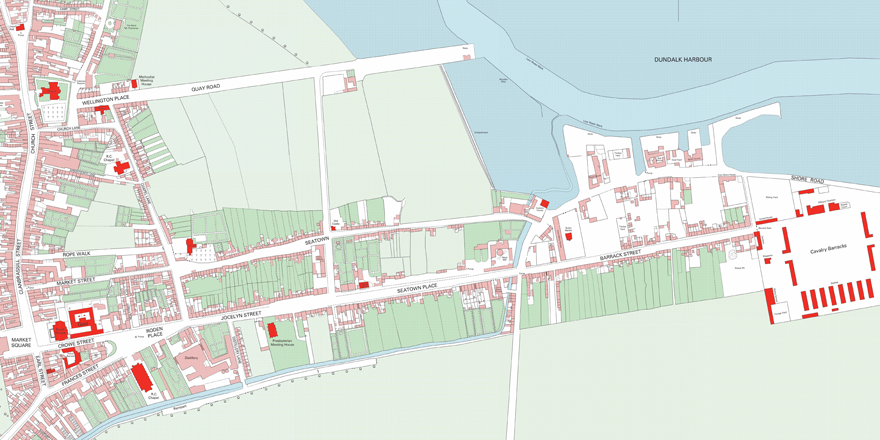 At Maynooth the Royal Canal was diverted to provide a harbour at Carton, the country seat of the Fitzgeralds, while a new bridge over the River Lyreen near the Mill improved the flow of traffic between east and west. For Dublin, the Ballast Board under municipal supervision undertook the dredging and deepening of Dublin Bay and the reclamation of the estuarine sloblands to provide lands for residential and commercial development. Meanwhile, the continued development of the city’s quays and the erection of new bridges over the Liffey facilitated both eastwards expansion and connectivity across the river.

Rich and poor inhabitants lived in close proximity in the towns and city, though the suburb developed in the south-west Liberties of Dublin by the Brabazons, earls of Meath, became an exclusively industrial quarter for workers in cloth manufacturing. But the landscaping of urban sites ensured a more pleasant environment for denizens of town and city. Whether for private or public enjoyment, parks and demesnes were established outside the towns as part of a gentrified lifestyle in Dundalk and Maynooth, while residential precincts such as Sackville Mall and St Stephen’s Green in Dublin drew favourable comparisons with London’s recreational parks. Bowling greens in the Oxmantown, Marlborough Street and Dawson Street areas attracted modish promenaders, and even a mundane utility such as the City Basin was environed by pleasant walkways. Dubliners could disport themselves in the Phoenix Park, originally laid out as a royal deer park, which was a rustic jewel in urbe. 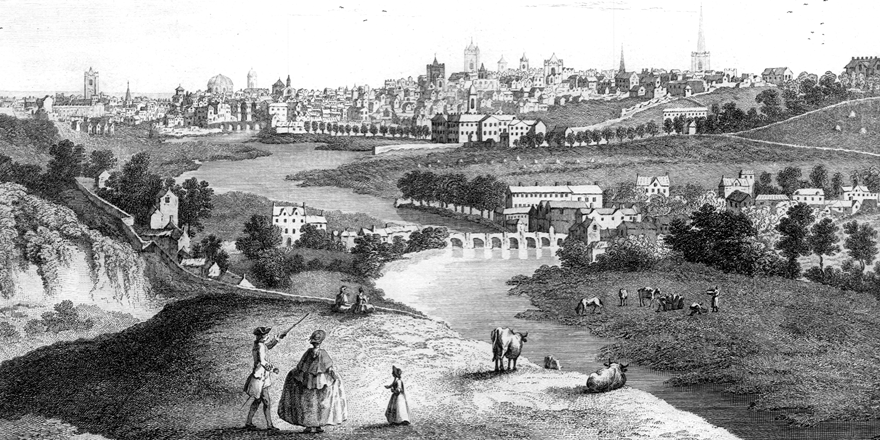 A prospect of the city from Magazine Hill by Joseph Tudor, 1753

In what was now a large cosmopolitan centre, a thriving coffee-house milieu developed in Dublin, fuelled by the upsurge in printed material, including newspapers and pamphlets, with improved communications by road and water bringing centres to the west and north, such as Maynooth and Dundalk, more easily within the influence of metropolitan culture.

To view and download the IHTA Online editions of towns of Maynooth, Dundalk and Dublin, part II, 1610 to 1756 click here.