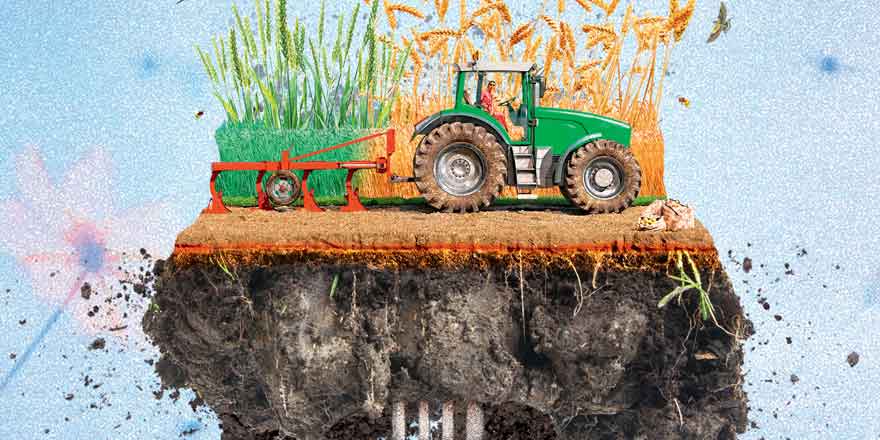 Agriculture is the main driver of global deforestation and land conversion, and food systems account for more than a third of global greenhouse gas emissions, making it a major contributor to climate change. A new report by Europe’s National Academies of Sciences provides evidence that a transformation to regenerative agriculture holds promising keys to reducing climate risks while providing the growing world population with food and enhancing biodiversity.

“Transforming agriculture is the planet’s greatest untapped treasure for coping with the climate crisis. Today’s large-scale conventional agriculture has huge negative impact on soil. Soil erosion, the loss of flora and fauna and thereby nutrients in soils, has become a major factor in Europe,” explains Professor Thomas Elmqvist, one of the lead authors of EASAC’s first-time scientific analysis of the potential of regenerative agriculture. The report shows that restoring biodiversity in soils, particularly in grasslands can dramatically increase their capacity to capture and store carbon.

“Sawing off the branch we’re sitting on”

While being responsible for a third of global carbon emissions, agriculture is extremely vulnerable to the effects of climate change, such as shifts in temperature and rainfall. More and more farmers, and particularly the smallholders that produce about a third of the world’s food, are struggling with harvest and livestock losses while trying to adapt to the increasingly irregular weather conditions caused by a changing climate. “We are literally sawing the branch that we are sitting on,” says Orsolya Valkó of Hungary’s Institute of Ecology and Botany.

“There seems to be a belief that regenerative agriculture can only be applied at small scale, and that making any changes to current industrial farming practices will make it impossible to feed a growing world population”, explains Professor Thomas Elmqvist. “But the opposite is true: we have maybe a decade for a massive transformation. We need to get industrial farmers on board and take a landscape perspective to reach the goals. Ultimately, we can only protect the scale of food production by moving away from only emphasizing quantity of agricultural production to more quality and nutritional value of agricultural products.”

No contradiction to modern plant and animal breeding technologies

EASAC’s results demonstrate that many of the analyzed practices show synergies between carbon capture and storage and enhancing biodiversity, while not having large negative effects on food production in the long term. The scientists underline that regenerative agriculture does not contradict the use of modern plant and animal breeding technology, tilling, use of mineral fertilizer or pesticides. Instead, it aims for a limited, more targeted use. The use of chemical pesticides, for example, can be reduced by using biological alternatives, employing gene-edited crops that are pathogen-resistant, or even introduction of predators.

Most potent carbon capture storage on the planet

Regenerative agriculture can take large amounts of CO2 out of the atmosphere and tie it back into the soil. “We are literally standing on the largest and most potent carbon capture storage of the planet,” Orsolya Valkó says. “Many field tests show how high the soil’s storage performance is. If we want not only to preserve biodiversity, expand food production and at the same time fight climate change, there is no alternative to regenerative agriculture!”

EASAC recommends that regenerative agriculture should be prioritized by Member States when implementing the new Common Agricultural Policy. This includes more diversification within and among crops, introduction of permanent and perennial crops, expanded agroforestry and intercropping, keeping green plant cover on all farm fields during all seasons, and reduced tillage.

EU and national governments must sharpen their instruments

The report welcomes the European Union’s Biodiversity and Farm-to-Fork Strategies as steps in the right direction but underlines that governments have done little so far to implement them. “We need sharp policies and sharp economic instruments,” says Elmqvist. “Targeting the farm scale is insufficient. Financial schemes should also benefit communities and associations of farmers managing landscapes in a coordinated way.”