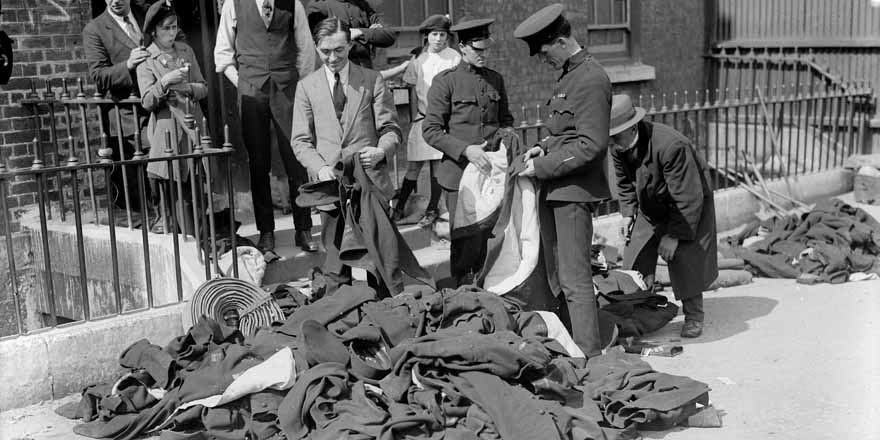 In collaboration with Century Ireland, we are making the 50 essays freely available online. Today's essay is by Brian Hughes and it covers the disbandment of the Royal Irish Constabulary and those it affected.

On 17 August 1922 Joseph Cashman photographed a small crowd of men and women outside Dublin Castle. Three were in Royal Irish Constabulary (RIC) uniform, with two standing among the discarded jackets and trousers of their colleagues. Less dramatic, perhaps, than men marching in formation, formal salutes, or flags being lowered and raised, the photograph nonetheless captures a symbolic moment in the shift to the new order in the Irish Free State. At 12 o’clock that day, the new Civic Guard (later An Garda Síochána) took charge of Dublin Castle and the RIC was, as The Irish Times put it, ‘fairly disbanded and put into civil life’.1 The process had begun in April, with men gathered in central barracks and camps before being gradually dispersed. For these former policemen and their families, the consequences lasted well beyond the five months or so it had taken to dismantle the RIC.  Continue reading (you will be redirected to the website of Century Ireland)