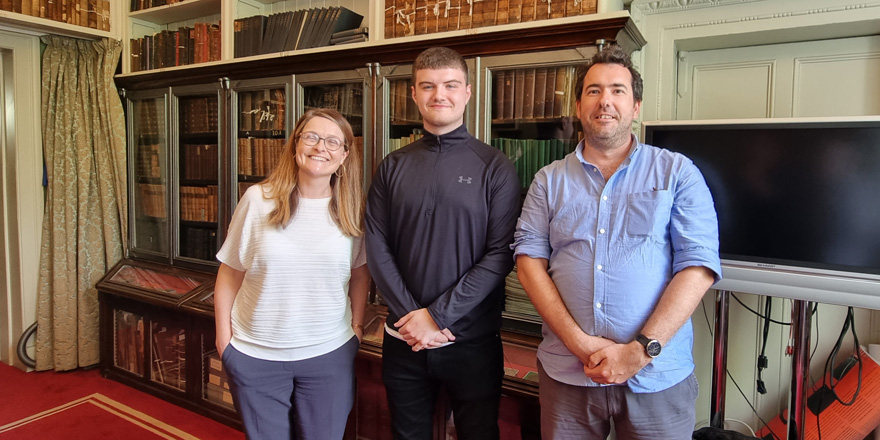 My name is Kevin Comiskey, I am a second-year student at Maynooth University studying law and history. I have recently finished up a six-week research stint (20 June to 29 July 2022) with the Irish Historic Towns Atlas (IHTA) in the Royal Irish Academy (RIA). This was an amazing experience that was conducted through the Summer Programme for Undergraduate Research (SPUR) programme run by Maynooth University (MU). I applied for the programme to gain experience in research outside of the university environment and to see if pursuing a postgraduate degree or a career in history would be for me.

My first day I was introduced to the project and how the IHTA works by RIA staff Sarah Gearty, Frank Cullen, Jennifer Moore and my MU mentor Jonathan Wright. Later that day I attended one of the quarterly meetings of the IHTA Digital Working Group in the Gold Room, Academy House.

For the rest of my first week I was introduced to the work I would be carrying out for the duration of my six-week programme. On the Tuesday, I went to the National Library of Ireland, got a reader's ticket and was introduced to the online catalogues and the microfilm room. Back in the RIA, Frank showed me Ordnance Survey Ireland’s GeoHive and we looked at the development of the Dublin suburbs using Kilmainham/Inchicore as a case study. I was introduced to the Irish Newspaper Archives online and the UK parliamentary papers via MU Library databases. We did some sample entries using a standard IHTA spreadsheet for the Dublin suburbs. I used this in the forthcoming weeks to input topographical references on Kilmainham/Inchicore and Drumcondra that turned up in the newspapers and parliamentary papers. I would record the details of the feature that were given and of the article or paper that they were mentioned in in the Excel spreadsheet and use GeoHive to locate them on a map. I found it extremely interesting to put a location to features mentioned in the sources and visualise them in relation to the suburb as a whole. 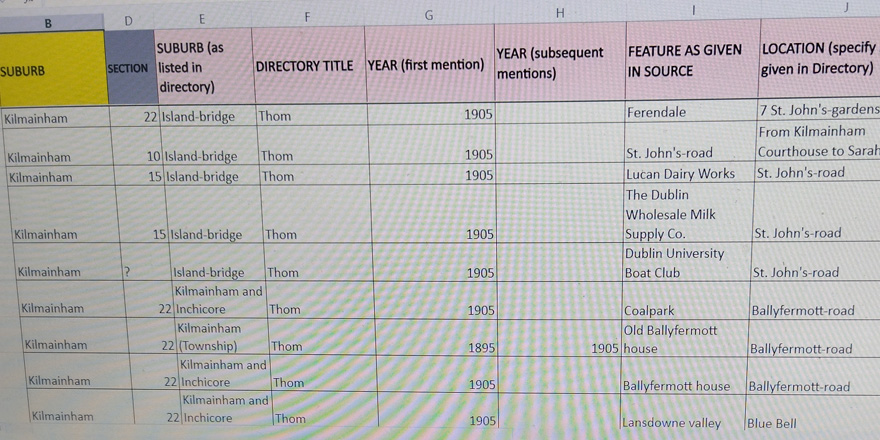 On Wednesday I met Sarah at Dublin City Libraries and Archive on Pearse Street. We got readers tickets and made appointments for the next five weeks on every Wednesday and Thursday. Sarah and I looked at Thom's directory for 1847, 1850 and 1855 and got set up. I started transcribing streets and details from Thom for Drumcondra and Kilmainham/Inchicore for the year 1847. Every subsequent Wednesday and Thursday I would spend the day in the library transcribing relevant details from the directories pertaining to topographical features such as mills or streets and track any changes or subsequent mentions throughout the directories. I completed work on the directories from 1847 to 1905 in intervals of 5 or 10 years. I gained useful research skills through this library work and an appreciation for the usefulness of primary sources like the directories in tracking the changes and developments in the suburbs of Dublin. I also got to meet Paul Rouse, UCD who was also working there at the same time on his own research. 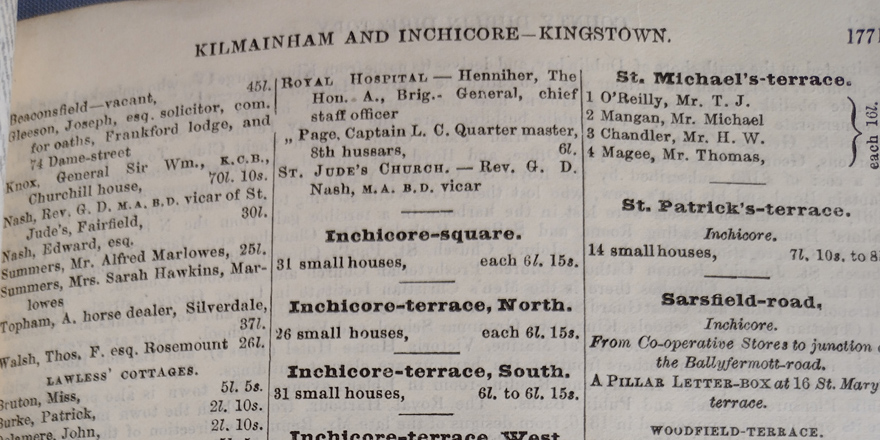 On the Thursday of that first week, Sarah explained work that was to be carried out on the Cork valuation map. We looked at the nineteenth-century Ordnance Survey and Valuation town plans that are used as key source material and I learned how they relate to the numbered lists of names and property valuations referred to as Griffith’s Valuation. Sarah showed me how to use Adobe Illustrator and how to plot the correct valuation symbols on each property in Cork. 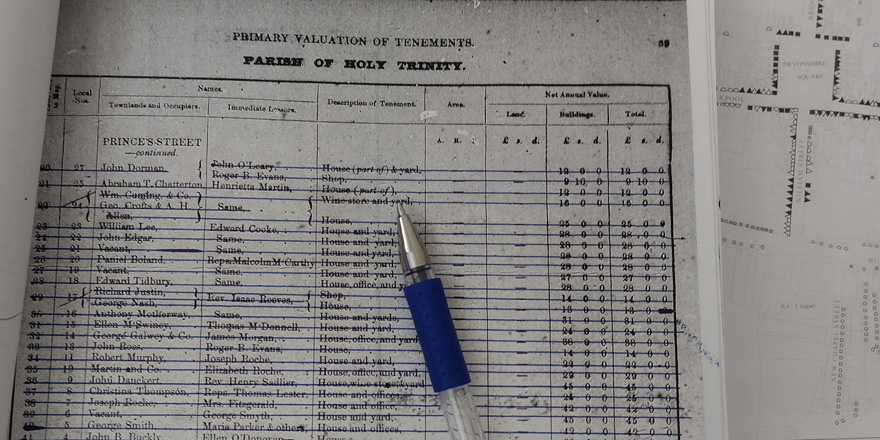 Every subsequent Monday and Tuesday I worked in the IHTA office carrying out this task of plotting the relevant symbols on the digital map. Sometimes I added line work to the digital map, by consulting both the Ordnance Survey maps and the Valuation maps. This was extremely enjoyable as I moved from building to building, street to street. I got an excellent appreciation for the work that goes into making such maps and the detail contained in the early historic plans, all drafted by hand in such detail. At the end I could see the large section of the map that I had compiled and understood the scale of the map and the information it presented. 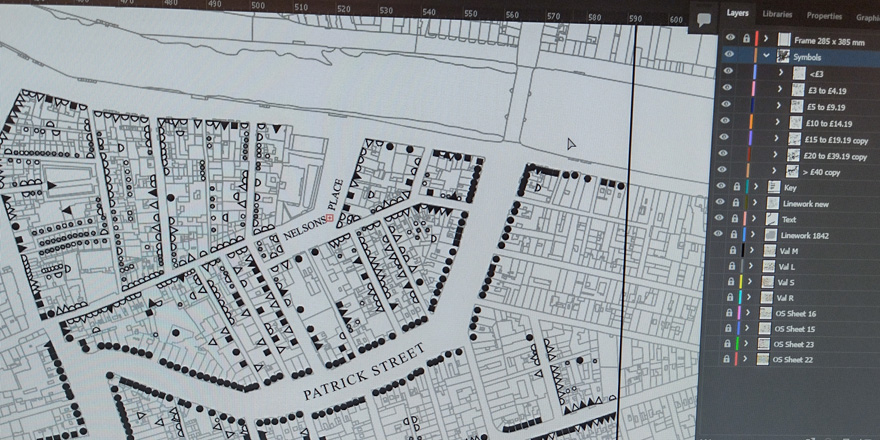 Overall, the programme was an extremely enjoyable experience. I learned about research and primary sources, which I had always found difficult in university. After six weeks of working with the IHTA I feel much more comfortable with utilising these sources. I found it satisfying when researching to see changes in names, occupants or industries throughout the Dubin suburbs across the decades, as well as seeing the expansion of the suburbs and the amalgamation of townships. It was always extremely interesting to see overlap between the directories, newspapers and parliamentary papers, and between the different suburbs mentioned. As well as the practical research skills I learned through my time with the IHTA, I also got the chance to attend meetings and meet researchers and professors from various universities who are involved in the IHTA including Raymond Gillespie, Howard Clarke, Michael Potterton, Anngret Simms and Ruth McManus.

The team were very helpful and guided me through everything, so I was never left in the dark. I cannot recommend the SPUR programme and the IHTA enough to any Maynooth students as it is an absolutely great experience and probably one of the best I have had in my time at university. I would like to thank everyone at SPUR MU and the IHTA, especially Jonathan, Sarah, Jennifer and Frank for organising and facilitating a fantastic six weeks.