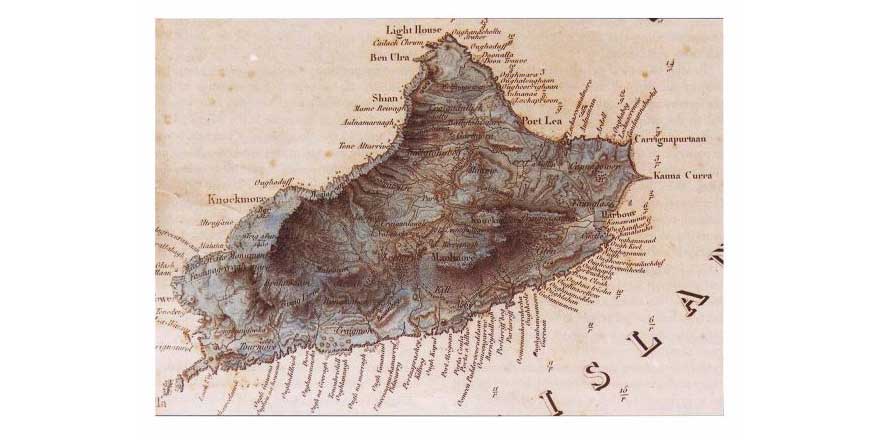 Between the years 1908 and 1911 the great Irish naturalist Robert Lloyd Praeger brought together a team of the most eminent naturalists of his day to carry out a comprehensive survey of Clare Island and the surrounding seas under the auspices of the Royal Irish Academy. He managed to recruit a hundred experts in every field of natural history, as well as climatology, geology, agriculture, history, archaeology and other aspects of island culture. Between them they looked not only at familiar groups of plants and animals such as birds and flowering plants on land and fishes in the sea, but at the dozens of other groups of smaller creatures with unfamiliar names most of us have never heard of. The result was an encyclopedia of life on—and indeed off—the island, because the naturalists spread the nets of their survey over the area of the adjacent mainland in its shadow.

The survey was undertaken with two objectives in mind: first, to see whether ‘some beginnings of that differentiation and specialisation which are so remarkable a feature of the natural history of oceanic islands’ had taken place since the separation of Clare Island from the mainland; and second, to see how many new species a concentrated study of this kind would show to be present, especially ‘among those more obscure and difficult groups which are apt to be neglected when, on a larger area, a rich fauna and flora prevail’. The survey experts examining these groups realised early on however, that little of exceptional note was to be expected, certainly little that would shed light on the way a distinctive fauna and flora could colonise and then evolve its own distinctive characteristics on an island: Clare Island was too close to, and too recently separated from, the mainland.

The results of the survey were published between 1911 and 1915 as a series of 67 reports on every aspect of the island’s natural and cultural heritage. The series offered a degree of detail and taxonomic spread on the island’s biodiversity without parallel for an area of comparable size anywhere else in the world at that time. The great Clare Island Survey has made the name of the island known to naturalists of every generation and taxonomic persuasion (not to mention archaeologists and students of agricultural history) not only in Ireland but abroad.

Praeger and his colleagues might have chosen some other island for their survey, and indeed there was much discussion beforehand about what island to focus on. Clare Island was chosen largely as a result of Praeger’s persuasive advocacy, in no small measure influenced by the spell the island had cast on him at the time of his first visit in 1903 when he spent a week on the island studying its plants.

Indeed, on the face of it Clare Island might have seemed the least suitable of islands for the survey, because it was not an island whose flora and fauna were least disturbed by human influence and therefore likely to be at their most pristine and diverse. In the late nineteenth and early twentieth centuries Clare Island had undergone a transformation of its landscape that was perhaps unique in the history of modern rural development. Prior to this the land had been farmed according to the communal farming system known as rundale, in which families built their homes in a cluster settlement (clachan) at the centre of the farm. A surrounding infield of unenclosed land was cultivated, in which each family had several strips, often widely scattered to ensure a fair allocation of land of different quality. The Great Famine brought utter devastation to the life on the island, halving the population by 1851. Large areas of cultivated land were abandoned, and the settlement pattern altered dramatically. In 1895 the Congested District Board bought Clare Island and proceeded to reorganise the chaotic pattern of land-holding into one of viable farms. This new approach often took the form of narrow ‘stripes’ of land extending from the mountains right down to the sea, so that everybody had a fair share of land of varying quality.

In 1998, as the centenary of the 1908–1911 survey approached, the Royal Irish Academy began to discuss the possibility of repeating the survey in order to see how things had changed over the course of the intervening century and what the causes of change were (and in particular whether the impact of changing climate could be discerned). The New Survey of Clare Island was completed in 2022, and the results published in a series of 11 volumes, including one that attempts to synthesise and reflect on the entire survey between the covers of a single volume. The final volumes of the New Survey were published and formally launched on the island in September of this year.

Like its predecessor, the New Survey can be considered an outstanding achievement, although it has not entirely succeeded in its aim of making a detailed comparison between the island of a hundred years ago and today. This is due in part to differences in methodology and intensity of effort between the two surveys. In its study of the island’s biota the New Survey has a more ecological focus and did not always adopt the strictly taxonomic approach of the original survey, which presented a separate publication for every taxonomic group or small number of groups, with the result that there are many gaps, particularly for marine taxa (and it should be noted that only 16 or so of the 36 major plant and animal phyla occur on land).

Clare Island is more than just another small part of rural Ireland. What makes it unique among the islands of Ireland is its extraordinary transformation under the Congested Districts Board and the great detail in which it was subsequently studied during the great surveys. As a result of the attention brought to bear on the island through the two surveys, no area of comparable size anywhere else in Ireland—and indeed perhaps anywhere else in the world—can claim to be known in such detail. This exceptional interest from the natural heritage perspective is coupled with a unique cultural heritage: nowhere else does the landscape so visibly and dramatically evoke the transformation that occurred in the west of Ireland after the Famine.

Over the last century the fortunes of farming on the island have been governed essentially by developments in the wider world outside of Clare Island. With the gradual abandonment of arable farming the ridged arable fields reverted to grassland, which acted as a protective seal on the earlier pattern of ridges. In recent decades farmers have concentrated mainly on sheep, the close grazing of which is optimal for the high nature-value flora this kind of grassland supports. This special type of grassland is characterised in particular by a diversity of waxcaps and related fungi, which have attracted much attention in recent years as valuable indicators of natural and semi-natural unimproved grasslands, typically unfertilised and of low nutrient status.

One of the most remarkable things about Clare Island is the completeness with which the pattern of traditional farming a hundred years ago is preserved in its landscape. Much of the ridged farmscape has however been lost to encroaching bracken and soft rush, resulting in the suppression of its waxcap flora. The deterioration of this unique landscape is a serious loss than can be halted and reversed through active participation by the island’s farmers in a restoration programme, grounded in a new awareness of its importance and potential—both for the island itself and in the context of European environmental policy. Such a programme sets out to conserve, restore and manage the island’s landscape in an ecologically sensitive and agriculturally informed way. This programme is now being put in place by the island’s farmers, with the help of an advisory group based in UCD’s School of Agriculture and Food Science. In its approach and broad outlines, it resembles the Burren and Aran Life Programmes, where farmers are actively involved in the conservation, restoration and management of their species-diverse limestone grasslands.

In addition to publishing the final volumes of the New Survey, the Royal Irish Academy will mark the completion of the 32-year-long project by hosting a public meeting in Academy House in November. The event will explore ways in which the invaluable information gathered over the course of the two surveys can be used to inform and assist the development of the island restoration programme. Among other things, the Academy also plans to make both the original and the new surveys available as open access resources, which will make this rich record of the island’s unique natural and cultural heritage freely available anywhere in the world.