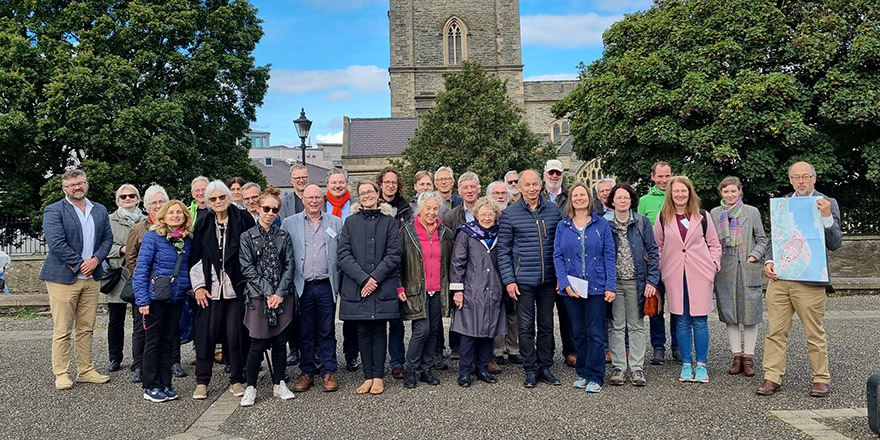 The annual meeting of the ICHT was held in Ireland for the first time in 38 years. Representatives from fifteen member states arrived to take part in the meeting which was a collaborative event between hosts at Maynooth University, the Royal Irish Academy, Queen's University Belfast, Derry and Strabane District Council, Dublin City University, Cavan County Council and Enniskillen Castle Museums.

Day one started in Renehen Hall, Maynooth University, with papers discussing Crisis in Urban Order from medieval to early modern times. In the afternoon, Arnold Horner (formerly University College Dublin and IHTA Maynooth author) gave an introduction to the morphology of the town ahead of a walking tour. The day culminated with the conference dinner in Pugin Hall, hosted by Terry Dooley, Head of the Department of History, Maynooth University.

For day two, the delegation moved to the Meeting Room of the Royal Irish Academy in Dublin where the Crisis in Urban Order papers continued into the eighteenth and nineteenth centuries. After a lunch hosted by the Royal Irish Academy, Barbara McCormack, Head Librarian, gave an introduction to a selection of the collections in Academy House along with a display of some of the Ordnance Survey Collection. A walking tour of 'Dublin in Crisis' was led by Howard Clarke, Ruth McManus and Frank Cullen to College Green, Dublin Castle, St Patrick's Park and Wood Quay in the afternoon.

The keynote lecture was delivered by Peter Crooks, Trinity College Dublin on 'Town, crown and archives: reconstructing the Virtual Record Treasury of Ireland' where he illustrated the new online resource. Mary Canning, President of the Royal Irish Academy, hosted a reception for the ICHT delegates in the Members and Council Rooms of Academy House following the keynote.

A field trip from Maynooth, Co. Kildare to Derry, Co. Londonderry took place on day three. The first stop was at Kells, Co. Meath where Anngret Simms explained the morphology of the 'monastic town' with a short walking tour using Map 2. Michael Ann Bevivino (Discovery Programme) talked us through some of the high crosses and the various iconography in the churchyard of St Columba's Church. The second stop was in Cavan town, where Brendan Scott introduced the town's history to the group with a walking tour before lunch, which was hosted by Cavan County Council in the Town Hall Theatre. The final stop was in Enniskillen at the Castle Museums where Development Officer, Fermanagh County Museum, Catherine Scott, gave a tour and background to the castle and the museum collections.

The final day of the ICHT conference involved the Atlas Working Group (AWG) and was based in the Guild Hall of Derry City and was welcomed by Bernadette Walsh, Derry City and Strabane District Council Archivist. The AWG session discussed themes under 'Mapping Crisis–Divided Cities' with papers from Anna Maleszka and Roman Czaja ((Nicolaus Copernicus University, Toruń), Poland), Judit Majorossy (Hungarian Academy of Sciences), Rosa Smurra (University of Bologna, Italy), Martin Uhrmacher (University of Luxembourg) and Raymond Gillespie (IHTA/Maynooth University). Miha Kosi (Historical institute ZRC SAZU, Slovenia) gave an update on the progress of Ljubljana. During the business meeting, new publications from various projects were presented along with updates on activities and collaborations.

Brian Lacey gave a walking tour of the Derry Walls in the afternoon sunshine ahead of the plenary discussion. For the closing reception, Mayor of Derry and Strabane District Council, Cllr Sandra Duffy hosted a reception and was presented with a copy of the IHTA no. 15 Derry~Londonderry and a copy of Coventry, which is the current UK City of Culture.

Many thanks to all who organised, participated and hosted the various elements of the ICHT Conference 2022. We look forward to Romania in 2023.