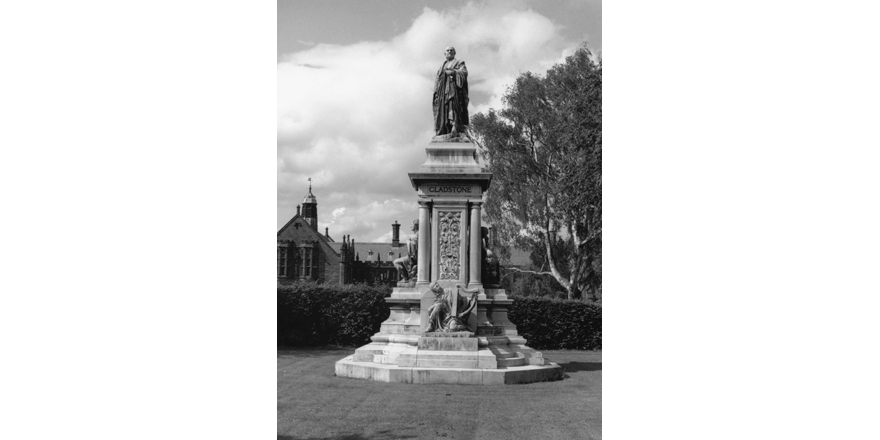 The statue which was commissioned in London, carried out in Paris and intended for Dublin ‘was never to find its place in the Irish capital and tells its own.

The latest entry in the Modern Ireland in 100 Artworks is John Hughes Monument to William Gladstone.

Catch up on all of the series. Have you been following the weekly feature? Tweet us your favourite @RIAdawson

According to Paul Murphy, editor of Volume 4, Sculpture, the statue which was commissioned in London, carried out in Paris and intended for Dublin ‘was never to find its place in the Irish capital and tells its own story of the State’s awkward relationship with its British and imperial heritage’.

She continues ‘William Gladstone, one of the towering figures of 19th-century British politics, was scarcely dead when The Irish Times, quoting an English journal, noted: “There will be a statue, of course, probably many statues, and they will most of them be good, for Mr. Gladstone’s face and form were of the kind which lend themselves to sculpture.”’

Little did the writer know that an idea had already been hatched to commemorate the former prime minister in portrait statues in London, Edinburgh and Dublin.

Read the full story of the Dublin tribute to Gladstone.

Read more about the sculpture and the artists behind in Volume 4 of the AAI.

Read more about John Hughes in his entry in the Dictionary of Irish Biography.

Hughes, John (1865–1941), sculptor, was born 27 January 1865 at 21 Portland Place, Dublin, one of five children of Patrick Hughes, carpenter, and Mary Anne Hughes (née Grace). From 1872 to 1879 he attended the Christian Brothers’ O'Connell School, North Richmond St., Dublin, after which he enrolled at the Metropolitan School of Art in Dublin. He initially stayed at the school for six years, after which he spent some time studying part-time in England before returning to the school in December 1888 and staying until April 1890. During this time he formed friendships with George Russell (qv), Oliver Sheppard (qv), and W. B. Yeats (qv). In 1890 he was awarded a scholarship to the South Kensington art school in London, where he studied under Edouard Lanteri and formed a friendship with Frederick Shelley, who was to become principal of the Plymouth School of Art. In 1892 another scholarship enabled him to study at the Académie Julian and Colorossi's Academy in Paris, after which he visited Italy. On his return he was appointed second art master at Plymouth Technical School. The following year he was appointed instructor in modelling at the London Metropolitan School of Art, where Lady Glenavy (qv), who along with Sarah Purser (qv) venerated him, recalled him as an inspirational and humorous teacher. In the same year he was appointed professor of sculpture at the Royal Hibernian Academy school. In 1898 he exhibited the ‘Finding of Eurydice’ at the Royal Academy, after which George Russell (of whom a bust by Hughes appears in Dublin City Gallery the Hugh Lane) commented that ‘the precision and delicacy of the modelling is something quite new in Ireland’. In the same year his first life-size bronze was the Charles J. Kickham (qv) monument in Tipperary town.

As well as busts in the National Gallery and National Museum, his eighth and last exhibit at the RHA, ‘The springtime of life’, appeared in 1901, a year after he had been elected to the RHA, and the same year he was represented at the Dublin International Exhibition by a marble sculpture, ‘Orpheus and Eurydice’. Due to increasing commissions he abandoned teaching around the same time, and his most important commission soon followed, when he executed his ‘Man of sorrows’ and ‘Madonna and child’ for Loughrea cathedral, Co. Galway, and he built himself a studio at Lennox St., Dublin. A marble monument to a former provost of TCD, George Salmon (qv), followed in 1902, and in 1903 he moved to Paris to work on the Irish national monument to Queen Victoria, which was unveiled by the lord lieutenant in Dublin in 1907. During this time he was also one of the founding members of the Royal Society of British Sculptors. In 1909 he was commissioned to produce a monument to W. E. Gladstone, an undertaking that caused him unlimited frustration and nervous exhaustion. He completed it at a time of rapid political change in Ireland, and in 1919 the nationalist corporation of Dublin refused to exhibit the monument, which eventually found a home at Gladstone's estate at Hawarden, near Chester, in the 1920s.

After this his artistic output declined, hampered by lack of finance, the absence of an agent, and his resignation from the Royal Society of British Sculptors. He never married, and continued to live abroad (which did little to enhance his prospects of securing commercial patronage), moving in 1920 to Florence, where he lived with one of his four sisters until 1926; in the 1930s his time was spent in Paris and various parts of Italy, where he referred to himself as a ‘wandering waif’. The last year of his life was spent in Nice. Bad luck played a large part in the career of Hughes, and indeed his legacy. Early patronage seemed to promise him artistic success on a grand scale, and it was events largely beyond his own control that affected the fate of his work. In 1948 his monument to Queen Victoria in Dublin was dismantled, eventually ending up in Sydney, Australia. While George Russell had referred to him as ‘a man of genius’, he referred to himself modestly as ‘an architectural modeller’, and critics saw his work as that of a confident figure sculptor and portraitist of transcendent integrity and intellective labour, who used every resource of sculptural technique. Although religious pieces were the exception rather than the rule of his career, his work was noted as providing great spiritual impetus. In a letter to his sister Sarah Hughes, he articulated his own definition of visual artistry as nature evoked but ‘with rhythm dominating realistic representation’. He died 6 June 1941 in Nice. His physical remains, buried at Nice, remained unclaimed within the statutory five years and were exhumed and committed to the public ossuary.