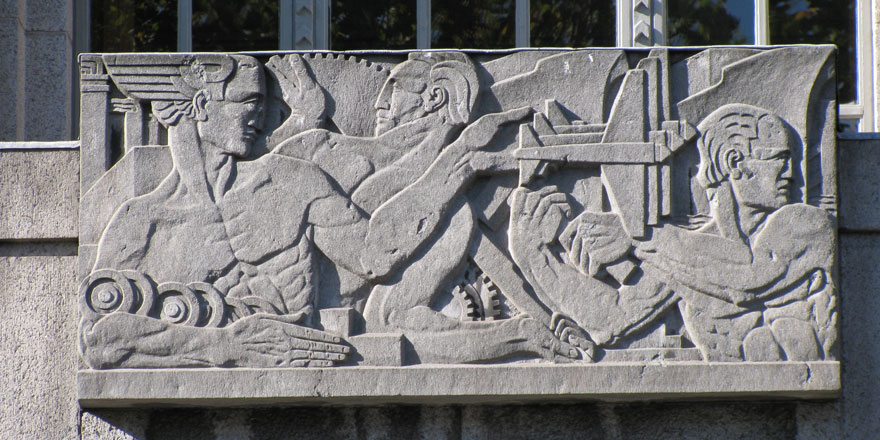 The sculpture, which features in Volume III of the Art and Architecture of Ireland is now part of the facade of DIT, on Cathal Brugha Street in Dublin. The sculpture is notable for its depiction of women. Archbishop McQuaid said of the college (at the time St Mary’s College of Domestic Science) that “here will be trained the women who will assist in building happy homes, for here will be imparted right knowledge and practice of the home craft.’

Gabriel Hayes was awarded the contract, and it took her three years to complete the commission. Little was written about the significance of the sculpture at the time, with most people choosing to focus on the fact that it was a woman who had received the commission and that she was brave enough to hang on scaffolding so high outside of the building.

However the sculpture was significant and should have been applauded in their own right, depicting Ireland’s industrial progress, images of shipbuilding, aviation and the tobacco industry can be seen carved in her ‘vigorous socialist-realist style’.

Gabriel Hayes also features in the Dictionary of Irish Biography, read her entry below.

Have you seen Three Graces? Tell us what you think about the sculpture by tweeting us @RIAdawson

In 1943 Hayes moved with her family to Newbridge Lodge, Celbridge, Co. Kildare, after her husband had become professor of Celtic archaeology at UCD. She painted four portraits and executed two large bronze reliefs – a ‘Sacred Heart’ and a ‘Madonna and Child’ – for the side altars of Holy Cross church, Glanworth, Co. Cork (1944). Her limestone Madonna figure was placed in the grounds of the Servite priory, Benburb, Co. Tyrone, in 1950. After a back operation in 1950 she spent a year convalescing in hospital. She contributed to the inaugural exhibition of the Institute of the Sculptors of Ireland (1952). In partnership with the architect Basil Boyd Barrett(qv), who designed churches in Cork, she executed such sculptures as the ‘Ascension of Christ’ for the church of the Ascension, Cork city. Her Madonna figure was placed in the church of the Black Valley, Co. Kerry, in 1954. She won a competition to design trophies for the 1954 Tóstal festival, but produced only two, the emblems for art and sport, as the procedure proved too costly. In 1955 her nine-foot (2.75-metre) bronze Madonna was placed over the Franciscan friary, Merchant's Quay, Dublin. She began work on life-size stations of the cross for Galway cathedral in 1957, a challenging undertaking that took eighteen years to complete. Her memorial to Luke Wadding (qv) (d. 1657) was placed on the quay near Reginald's Tower, Waterford city, in 1957. For St John's church, Tralee, Co. Kerry, she executed sculptures in Portland stone of ‘Christ carrying his cross’, and a stone rendering of St Brendan (1959). She placed a bronze figure of ‘Our Lady’ over the entrance to St Mary's Church, The Mall, Westport, Co. Mayo (1960), and carved a ‘Holy Family’ in Portland stone for the Holy Family post-primary school, Newbridge, Co. Kildare (1967).