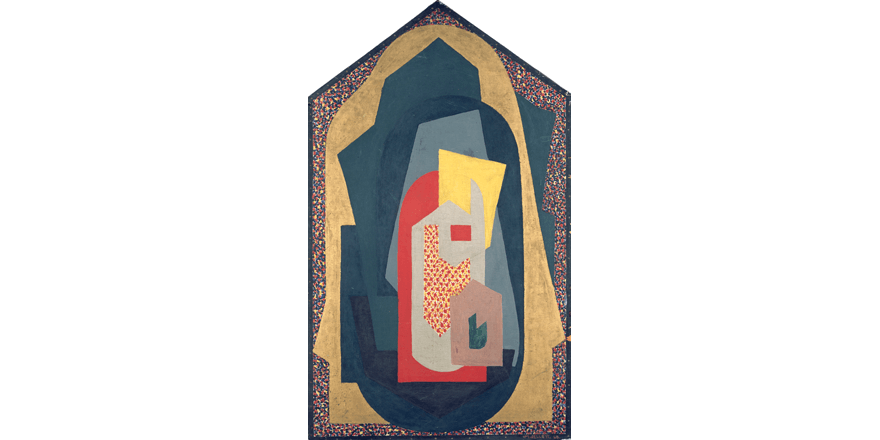 Catch up on the entire 100 Artworks series and learn more about our Art and Architecture of Ireland project.

‘Decoration is in fact a religious painting. The expression of spirituality through art was a vital aspect of Jellett’s modernist mission and Decoration draws on traditional images of the madonna and child. That these references were lost even on a largely Catholic culture underlines the degree to which abstract art was viewed as obscure and incomprehensible.’

Read more about the artwork and the artist behind it.

Read Mainie Jellett’s biography from the Dictionary of Irish Biography.

Jellett, Mainie (1897–1944), artist, was born Mary Harriet Jellett on 29 April 1897 into a protestant family at 37 Fitzwilliam Square, Dublin, the eldest of four daughters of William Morgan Jellett, a barrister, and Janet Jellett (née Stokes). Her father, the son of John Hewitt Jellett (qv), a former provost of Trinity College Dublin, was involved in southern unionist politics; her mother, descended from the physician and United Irishman, Whitley Stokes (qv), was a musician of note. Educated at home by a governess, and adopting her pet name ‘Mainie’ during childhood, Jellett received early painting classes from Elizabeth Yeats (qv), Sarah Harrison (qv) and Mary Manning (qv), before enrolling in the Dublin Metropolitan School of Art in 1914 where her teachers included William Orpen (qv). In January 1917 she travelled to London to attend the Westminster School of Art, studying under Walter Sickert. Here she met the artist Evie Hone (qv) and painted ‘In Sickert's studio’, as well as a large number of drawings, watercolours and oils which were rich in quality, demonstrating excellent draughtsmanship. In Dublin, she began to exhibit at the Royal Hibernian Academy, and painted in Donegal and Scotland while on family holidays, where she worked in relatively traditional forms, reflected in such work as ‘Loch Carron’ (1921).

In 1920, the year in which she won the Taylor scholarship, she travelled to Paris with Hone and they both began work in André L'Hote's studio where Jellett first began to learn the principles of abstract art, or as she said herself ‘I learnt how to use natural forms as a starting point towards the creation of form for its own sake’ (Arnold, Mainie Jellett, [3]). L'Hote belonged to a school of cubism which adhered to the subject in still life or landscape and portraits. Deciding they wanted to go further into the extreme abstraction of cubism, Jellett and Hone approached the cubist Albert Gleize, who had effectively discarded the renaissance concept of painting as illustration or decorative anecdote, and persuaded him to take them on as students. Jellett collaborated with and assisted Gleize in working out theories and helped him in clarifying his intuitive ideas, and working in oil and gouache, she mastered his technique. By 1922 she had produced a significant body of cubist canvases. Together, the women had effectively begun the modern movement in Irish painting, with Jellett in particular giving it identity and purpose and monitoring its direction.

On their return to Ireland, both artists exhibited in 1924, where their work was greeted with shock, scepticism and hostility, particularly from the RHA and conservative followers of Orpen. George Russell (qv) savaged them in the Irish Statesman, writing of ‘artistic malaria . . . the real defect in this form of art is that the convention is so simple that nothing can be said in it’ (Irish Museum of Modern Art, Mainie Jellett, 19). However, the energetic and inspirational Jellett was equal to the task of breaking through these walls of prejudice, and ultimately her teaching, writing and persistence in promoting modernism, abstraction and the extreme forms of non-representational art had a historical importance beyond her actual achievements as a painter. As a teacher in Dublin she instructed each student individually, turning the pupil's attention away from the natural tendency to copy, and she waged a vigorous campaign to bring the ideals of the artist to a wider audience, deploring the idea of artistic isolation. As well as lecturing and broadcasting, she exhibited at the Radical Club in Dublin, and showed her work in London, Versailles, Amsterdam and Paris. From 1930 to 1937 she resumed exhibiting at the RHA, softening her compositional style with greater use of curves. The Royal Academy exhibition on Chinese art (1935–6) also had an impact on her style.

She designed stage sets for plays and ballets, and was commissioned by the government to execute murals for the Irish pavilion at the Glasgow Fair in 1934. While she continued her cubist exhibitions at St Stephen's Green in Dublin, her work began to demonstrate a scientific use of colour in the plastic arts. Urging local authorities to establish committees to promote art and culture, Jellett believed in the need to use art for useful purposes including town planning, textiles and architectural design, and expressed the belief that ‘the artist should be a competent worker as in the period when the guild system operated’ (Mac Carvill, 18). Her deep spirituality manifested itself in her artistic treatment of sacred subjects based on the combination of planes and triangles, and ultimately, both she and Hone made Paris-oriented modernism respectable even for the church. Many of the semi-abstract paintings in the last year of her life were religious, including ‘The ninth hour’ (1941), ‘The Madonna of Éire’ (1943) and one of her best known works, ‘Deposition’. Though some critics contended that her work was a mere adaptation of that of Gleize, rather than demonstrating indisputable individual genius, she undoubtedly provided an artistic and ideological platform for future Irish artists.

Along with Hone, Louis Le Brocquy, Norah McGuinness (qv) and others, Jellett was a central character in establishing the Irish Exhibition of Living Art (IELA) in 1943, and her last picture, ‘Western Procession’, appeared at the inaugural exhibition. She had been appointed chairperson of the exhibition, but was too ill with cancer to take any further part. Unmarried, she died 16 February 1944 in a Dublin nursing home, after which the IELA inaugurated a scholarship fund in her memory.