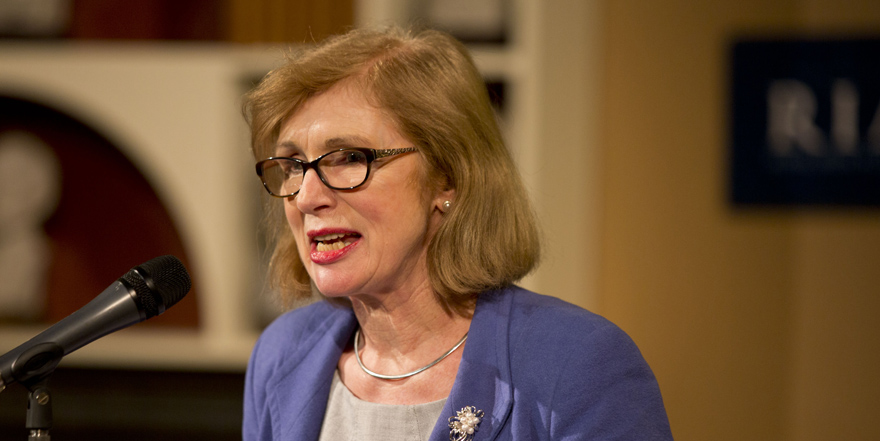 Minister Jan O’Sullivan presented the Royal Irish Academy Gold Medals to the Philosopher Professor Desmond Clarke and Theoretical Physicist Werner Nahm on Tuesday 27 January 2015 in recognition of their outstanding contributions to the Humanities and Physical and Mathematical Sciences.

In presenting the medals the Minister congratulated the medallists on their many achievements and paid tribute to the RIA for providing a platform to celebrate academia and the role it plays in our society and economy, saying: "Our higher education system has been instrumental in the development of Ireland into the modern economy and society that it is today. Occasions such as these recognise the exceptional wealth of scholarship across the broad range of disciplines that is being undertaken in Ireland. Higher education and those working within it will continue to play a vital role as we continue to recover and build a better economy and society.”

Each medal is a testament to a lifetime of passionate commitment to the highest standards in scholarship and they are a well-deserved recognition of scientific and academic excellence.

Speaking at the ceremony President of the Royal Irish Academy, Professor Mary Daly, said the Academy Gold Medals recognise two of Ireland’s foremost contributors to the world of learning and science. Such public recognition of excellence is important, especially in the current climate, and the Academy is delighted to be able, with the generous support of the Higher Education Authority to honour today's recipients.

Guests at the ceremony included members of the Irish higher education system, funding agencies, the British & German ambassadors to Ireland and friends and family of the medallists.

The Royal Irish Academy Gold Medals are awarded to two outstanding academics each year and are recognised as a truly national expression of celebration for scholarly achievement. The medals are sponsored by The Higher Education Authority. Learn more about the medals in the below videos.

Professor Werner Nahm, Director of the School of Theoretical Physics at the Dublin Institute for Advanced Studies received the Gold Medal for Physical and Mathematical Sciences. Through his pioneering research, he has contributed substantially to a wide range of fields but especially mathematical physics. Nahm is exceptional for his deep insight into the mathematical structures underlying quantum field theory. He is described as a genuine polymath and recently brought his unique combination of mathematical, linguistic and astronomical knowledge to bear on the question of the precise dating of Babylonian, with important implications for the chronology of the Middle East and studies of historical climate change.

Professor Desmond Clarke is Professor (emeritus) of Philosophy at University College Cork and is one of Ireland’s most distinguished internationally recognised scholars. Clarke’s most remarkable achievement was his founding, editing, and general management of the series Cambridge Texts in the History of Philosophy. Through this series the range of works Professor Clarke has made available to scholars and students is immense, stretching from Greek antiquity to the twentieth century. He actively participates as a public intellectual in Irish life and contributions to debates about nationalism and the legal enforcement of religious morality.