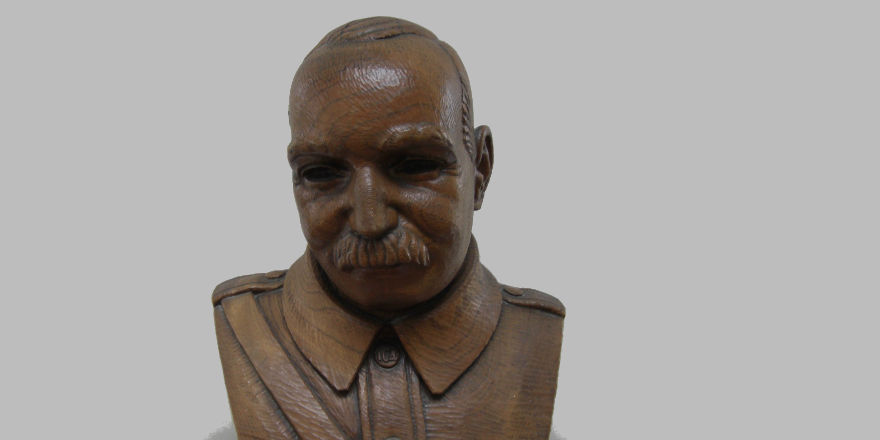 This week’s Modern Ireland in 100 Artworks is from the year 1947. Taken from the Sculpture volume of the Art and Architecture of Ireland the artwork chosen is Hilary Heron’s bust of James Connolly.

Commissioned to carve busts of writers and activists, the young artist brought a layer of history to the labour leader’s familiar face

Have you caught up on the Modern Ireland series?

Here’s the introduction to the article:

Four Provinces House, the new premises of the Irish Bakers’, Confectioners’ and Allied Workers’ Amalgamated Union, which was designed by Michael Scott in collaboration with Uinseann MacEoin, opened on Harcourt Street in Dublin in 1946.

Several artists were asked to work on the building, notably Laurence Campbell, who carved reliefs depicting the story of grain, from field to table, on the facade, and Frances Kelly and Nano Reid, who painted murals in the ballroom, showing aspects of the bakers’ trade-union history and images of Irish labour writers and activists. Hilary Heron was commissioned to carve portrait heads for the library, which opened on the first floor of the building in June 1947.

Learn more about Hilary Heron from her Dictionary of Irish Biography entry below.

Heron, Hilary Mary (1923–77), sculptor, was born 27 March 1923 in Dublin to a protestant family, daughter of James Heron, bank official, and Mary Elizabeth Heron (maiden name not known). She spent most of her childhood in Coleraine, Co. Londonderry, and New Ross, Co. Wexford, where she attended John Ivory's one-teacher school, though most of her education was private. She attended the National College of Art in Dublin, where she was awarded three Taylor art scholarships in succession by the RDS. During this period she also helped to establish the Irish Exhibition of Living Art, where she exhibited in 1943, supporting the older avant-garde artists who sought to create an alternative to the more academic Royal Hibernian Academy exhibitions. In 1944 her piece ‘Chessmen in walnut’ was admired for its sophisticated craftsmanship and humorous originality. In 1945, having left the college of art with a reputation as a nonconformist, she exhibited at the RHA with a piece entitled ‘Horse’ and subsequently exhibited three other pieces at the same venue, including ‘Dawn’ (1946) and ‘Comedy and tragedy’ (1947). Regarded as a gifted and mature sculptor for one so young, in 1947 she was awarded the first Mainie Jellett (qv) memorial travelling scholarship for her work in carved wood, limestone, and marble, and travelled to Italy and France to study Romanesque carving. Heron continued to exhibit at the Irish Exhibition of Living Art with works including ‘Danaan woman’ (1949), carved in Australian blackwood grown in Co. Kerry, which, according to a contemporary critic, showed ‘a fusion of her qualities as a sculptor: acute observation, an imaginative sense of form, and a sensitive feeling for the character of her medium’ (Dublin Magazine, quoted in Snoddy, 253).

Following this kind of success, her first one-woman show was held at Victor Waddington's gallery in Dublin (1950), where the pieces she displayed included ‘Flight into Egypt’. Though she was eventually to lose her enthusiasm for individual shows, she held another one-woman show at the same venue in 1953, the year in which her work was also included in the contemporary Irish art exhibition at Aberystwyth, Wales. Heron travelled widely in Europe, Asia, America, and Russia, absorbing many influences, and began to work extensively with metal during the 1950s. With Louis le Brocquy, she represented Ireland at the Venice Biennale in 1956. Influenced by the work of Picasso and African and Sumerian carving, Heron often chose religious themes for her exhibits. In 1958 she was commissioned by the Irish government to complete work for an Irish exhibition in New York, and in 1960 her first exhibition in England was shown at the Waddington Galleries in London, where she displayed more than thirty works, including ‘Bird barking’ and ‘Squares in different places’. One English critic saw her work as assimilating exotic styles with a great feel for nature, remarking that ‘she brings something fresh, diverting, and also very genuine to our inbred world of sculpture’ (Neville Wallis, quoted in Snoddy, 253).

Maturity witnessed her thriving in her capacity to explore unusual combinations of techniques and materials (an example was her stone and marble ‘Lithodendrons’), and the increasingly humorous nature of her work in the 1960s was a reflection of her personality, which was honest, truthful, witty, and compassionate. A lover of the natural world and Irish landscape and antiquities, she was an accomplished gardener and botanist with a fascination for collecting and arranging animal bones in her Dalkey home, and she devoted much of her private time to charitable pursuits, caring for the aged and ill. She began to learn the Irish language late in life, no doubt influenced by her husband, the Celtic scholar David Greene (qv), whom she married in 1959. They had no children. As well as being active in Cumann Merriman, in the 1970s she was appointed a member of the RTÉ authority. She died 28 April 1977 in Dublin, survived by her husband.