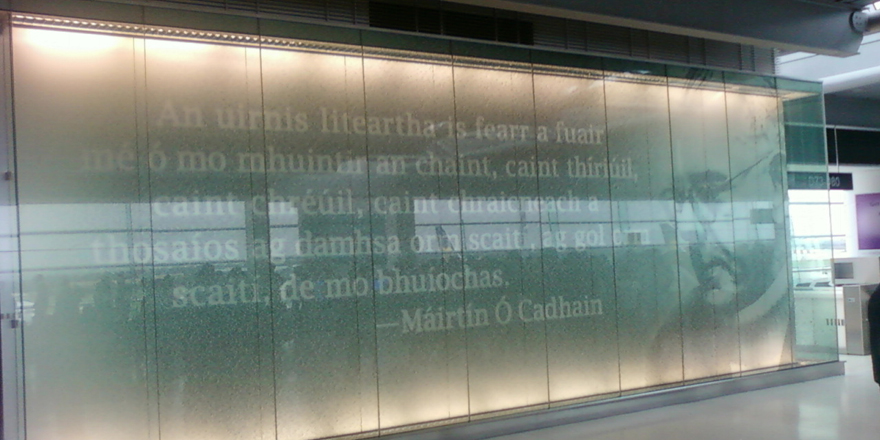 The latest in the Modern Ireland in 100 Artworks series is Máirtín Ó Cadhain’s Cré na Cille.

Catch up on the entire 100 Artworks series. Here’s a sneak peak at the Irish Times article:

The Irish State considered Connemara native Ó Cadhain as a threat to neutrality, but his acclaimed Irish-language novel is a brilliant series of scenes of class struggle.

One of the side effects of the second World War was the internment of IRA activists by an Irish government that feared their alliance with Germany would endanger Irish neutrality.

Máirtín Ó Cadhain, who had been dismissed from his teaching job in 1936 for IRA membership, was imprisoned initially in Arbour Hill, in Dublin, just after the outbreak of the war, then interned at the Curragh from April 1940 to July 1944.

Ó Cadhain used his time well. His intensive study of languages and of modern European literature helped him become the most important prose writer in Irish of his generation, and one of Ireland’s most innovative 20th-century writers.

Learn more about Máírtín Ó Cadhain in his Dictionary of Irish Biography entry below.

Ó Cadhain, Máirtín (1906–70), republican, creative writer, and academic, was born 4 January 1906 at An Cnocán Glas, Spiddal, Co. Galway, second born and first surviving child among seven sons and six daughters of Seán Ó Cadhain, farmer, and Bríd Ní Chonfhaola, farmer's daughter, both of Co. Galway, who were married on 21 February 1904. He received his primary education in Spiddal boys' national school and (after the completion of the normal course there) was retained by the principal teacher as an apprentice teacher or ‘monitor’ until 1924, when having won a King's scholarship (for the second time), he entered St Patrick's College, Drumcondra, to train as a primary teacher. He graduated in July 1926.

He spent short periods teaching in Daighinis and in Galway city, where he attended university and was awarded a diploma in education in May 1927. Later that year, he was appointed principal teacher in Camas, Co. Galway, from whence he transferred to An Carn Mór, Co. Galway, in 1932. He had already enlisted in the IRA and become commanding officer of the Camas company, and in 1930 was elected chairman of the West Connacht branch of the INTO. In An Carn Mór he continued to engage in republican activities; was active in an organisation called ‘Muintir na Gaeltachta’ which he helped to found in 1934; founded a branch of the Gaelic League in An Carn Mór; and in 1935 was elected to the Central Committee of the League. His republican activity led to his dismissal from the principalship of An Carn Mór school (1936), to his imprisonment in Arbour Hill barracks (1939), and to his internment in the Curragh camp (April 1940–July 1944).

During his internment Ó Cadhain was engaged in various educational projects on behalf of his co-internees, including lecturing on history, teaching Irish, and publishing a journal. He also busied himself with learning Russian and improving his command of French, with reading widely in Irish and European literature and literary criticism, and with creative writing in Irish. In the 1930s he had published four important collections of folklore from his native area in Béaloideas, the journal of the Folklore Society of Ireland, had produced (1932) a translation into Irish of Charles Kickham's (qv) novel Sally Kavanagh, and had published (1939) a collection of short stories, Idir shùgradh agus dáirìre. It was with his second collection of short stories, An braon broghach(1948), which contained a number of stories that he had written while interned, that Ó Cadhain began to emerge as a significant creative writer whose study of literature during his internment had had a profound impact on his imaginative and intellectual development. In 1949 his important novel, Cré na cille, was published and was followed in 1953 by a third collection of short stories, Cois Caoláire, which contains several excellent stories and demonstrates his command of many kinds of material and technique. In the meantime he had produced a further novel, Athnuachan, which he declined to publish, though it was awarded the Club Leabhar prize for a novel in the Oireachtas literary competition of 1951; it appeared in print (ed. Breandán Ó Doibhlin) in 1995. For the remainder of the 1950s he appears to have lost his creative urge, though he contributed a regular column to theIrish Times from 1953 to 1956. Then in 1962 he published a long satirical essay in the journal Comhar on individuals and institutions who were failing, in his view, in their duty to the Irish language. This created a furore, and when he submitted four further essays in a similar vein they were rejected by the journal. He proceeded to rewrite them as a long prose work, to which he gave the title Barbed wire and in which by lavish use of intertextuality he established a frame of reference in European and earlier Irish literature, and in a number of sections discussed advances being made in the biological sciences and problems of time and history. This work failed to win a prize at the Oireachtas literary competition of 1964 and the comments of the adjudicators greatly offended Ó Cadhain. Barbed wire (ed. Cathal Ó Háinle) was published in 2002.

Ó Cadhain's republicanism was no merely theoretical matter, but was informed by his awareness of the imperative need to improve the lot of the rural poor, particularly that of his own people in the Gaeltacht, and of the perilous condition of the Irish language. This led to his active participation in efforts to improve social conditions in the Gaeltacht through Muintir na Gaeltachta, to his becoming in the 1960s the guiding light of an organisation called ‘Misneach’ which through agitation sought to bring pressure on the state to take its duties to the Irish nation seriously, and to his crucial engagement with the political campaign of the movement for Gaeltacht civil rights, ‘Gluaiseacht Chearta Sibhialta na Gaeltachta’ in the later 1960s. He launched bitter verbal assaults on individual politicians and attacked the system in print in scores of letters to the papers and in a series of pamphlets, Irish above politics (1964), Mr Hill: Mr Tara (1964), An aisling (1966), and Gluaiseacht na Gaeilge: gluaiseacht ar strae (1970).

In the meantime he had returned triumphantly to creative writing and had published his fourth collection of short stories, An tsraith ar lár (1967), in which several of the pieces reveal his ongoing search for new approaches to his craft and his ability to offer fresh insights into life and human nature. For this book Ó Cadhain was awarded the Irish-American Cultural Institute's Butler prize of £2,000. Stimulated by this recognition, he published in 1970 a fifth collection of short stories, An tsraith dhá tògáil, which contains a number of bleak and powerfully disturbing stories of urban alienation and failure of personal relationships. His final collection of short stories, An tsraith tógtha, was published posthumously in 1977. Though it contains a few stimulating pieces, it seems not to have benefited from the kind of careful rewriting to which Ó Cadhain submitted the work published in his lifetime.

After his release from internment in 1944, Ó Cadhain earned a living in a variety of menial employments until 1947, when he was appointed to a junior civil service post in Rannóg an Aistriúcháin, the translations section of Dáil Éireann. On the strength of his reputation as a creative writer in Irish and of his unparalleled command of the language, he was appointed (1956) to a lectureship in the school of Irish at TCD. When David Greene (qv) resigned from the chair of Irish (1967) Ó Cadhain applied for the post but was refused and was instead appointed to an associate professorship in the school and to the headship of department. In that year too he accepted an appointment to a visiting professorship in the department of Celtic at QUB. In 1969 he was appointed to the chair of Irish in TCD, and was elected to fellowship of TCD in 1970. As a lecturer he exercised a profound influence on many of his students, particularly those to whom his radicalism appealed. Among the small number of academic papers that he published, his lecture ‘Béaloideas’, delivered to Cumann na Scríbhneoirí and published in Feasta in March 1950, is a trenchant critique of certain attitudes to folklore; his striking writer's testament ‘Páipéir bhána agus páipéir bhreaca’ (1969) offers a vibrant self-assessment; while his lecture in the Radio Éireann Thomas Davis series on the Gaelic League (delivered 1969; published 1972) and his lecture to the Welsh Academy's ‘Taliesin’ Congress (delivered 1969; published in Literature in Celtic countries (ed. J. E. Caerwyn Williams) 1971) treat of aspects of modern writing in Irish. A collection of material published by Ó Cadhain in the journal Feasta was published as Ó Cadhain i bhFeasta (ed. Seán Ó Laighin) in 1990; the essays in his column in the Irish Times were published under the title Caiscín (ed. Aindrias Ó Cathasaigh) in 1998; and a collection of material published by him in the journal Comhar was published asCaithfear éisteacht (ed. Liam Prút) in 1999.

He died in the Mater Hospital, Dublin, on 18 October 1970. He married (1945) Máirín Ní Rodaigh (d. 1965), daughter of Philip Ruddy of Co. Cavan, teacher. Ó Cadhain and his wife, who was a teacher in an all-Irish school, lived at various addresses in Dublin; they had no family. A portrait of Ó Cadhain by Seán O'Sullivan (qv) is in private hands; a bust by James Power is in TCD. His papers are deposited in the Library of TCD.