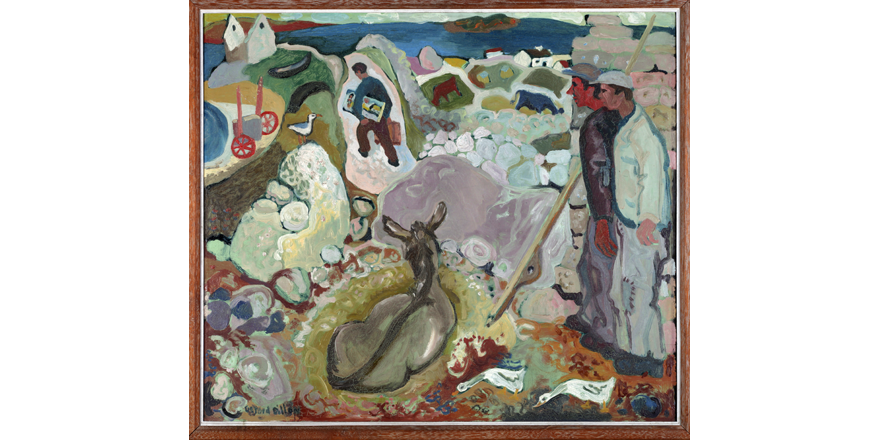 The latest in the Modern Ireland in 100 Artworks series is Island People by Gerard Dillon.

For the Belfast-born artist, the Connemara island of Inishlackan, where he lived for a year, was a space of social and political freedom.

Island People is one of a series of artworks that Gerard Dillon painted while living on the island of Inishlackan, off Connemara. Two islanders stand by a gable watching as an artist – probably Dillon – walks off, carrying a suitcase and a painting. The artist heads towards the shore, where two beached currachs represent the only way back to the mainland.

The painting is recognisable as a landscape in the childlike style that Dillon favoured for his images of the west. The artist’s bowed posture and dragging steps suggest a reluctance to leave the island.

Learn more about artist Gerard Dillon from his Dictionary of Irish Biography entry.

Dillon, (Francis) Gerard (1916–71), painter, was born 20 April 1916 in Belfast, eighth and youngest child of Joseph Henry Dillon, postal sorter, and Amie Dillon. The family lived at 26 Clonard St. in the Falls Road area of Belfast. Dillon was educated at the Raglan St. public elementary school and later at the CBS in Harding St., to which he had won a scholarship in 1927. In 1930 he left school to become apprenticed to the firm of Maurice O'Sullivan & Sons, painters and decorators, on the Falls Road. He was largely self-taught as a painter, studying only very briefly at Belfast College of Art. He went to live in London (1934), where he continued to work as a housepainter while attempting to further his ambitions as an artist. During this time he made frequent visits to Ireland to paint, as in 1939, when he toured Connemara. With the outbreak of war in that year he decided not to return to London and so lived in Dublin till 1945.

In Dublin Dillon joined the White Stag group in 1941, where he met leading contemporary artists and began to exhibit his work. Early in the following year his first one-man exhibition was opened by Mainie Jellett (qv) at the Country Shop on St Stephen's Green. He became a member of the Dublin Painters Group in 1943. In the same year he exhibited for the first time at the RHA and was involved in the setting up of the Irish Exhibition of Living Art, where he sold his first oil painting in 1944. His work was also exhibited in Belfast and Portadown alongside the work of artists such as George Campbell (qv) and Daniel O'Neill (qv). Along with these artists Dillon was a founder member of the short-lived Progressive Painters Group, established in Belfast in 1944, which aimed to promote public awareness of modern art. Similar concerns prompted him to help form the First Group in London in 1961. During the 1940s he continued his travels around Ireland, drawing particular inspiration from Connemara and the Aran Islands. The people of these areas and their way of life were a key subject for him throughout his career. With George Campbell he spent a year living on the island of Inislacken in 1950–51.

By the late 1940s Dillon, having returned to London, was emerging as a mature artist though he still had to pursue part-time work to support himself. Through his exhibiting at venues such as the gallery of the Council for the Encouragement of Music and the Arts in Belfast, the Victor Waddington Gallery, Dublin, and the Piccadilly Gallery, London, his reputation continued to rise. Dillon's work was included in a number of international exhibitions such as the Pittsburgh International, where he represented Great Britain in 1958, and the Guggenheim International, where he represented Ireland in 1958 and 1960. He took part in the Marzotto International in Rome in 1963, and his work was also seen in Washington, Boston, New York, and Paris. He also travelled in Spain and Italy.

He maintained his links with Ireland, serving as a committee member for the Irish Exhibition of Living Art, exhibiting at the annual RHA and oireachtas exhibitions, and showing regularly at the Dawson gallery in Dublin. In October 1963 he was a member of the Irish Trade and Culture Delegation that travelled to the USA, where his work was exhibited in New York. He returned to live in Dublin in 1968 at 28 Chelmsford Avenue, Ranelagh. Throughout this time he continued to paint in the west of Ireland.

Dillon worked in an expressionist, somewhat naive manner reminiscent of the art of Marc Chagall (1887–1985). This influence can be seen in ‘The yellow bungalow’ (1954; Ulster Museum, Belfast) in the way Dillon used vivid colour and a high viewpoint, distorting the perspective and so flattening the spatial structure of the painting. Also characteristic of his work was a strongly autobiographical approach combined with a surreal element. This is especially true of his later work, where the theme of the pierrot is symbolic of Dillon himself, as in ‘The brothers’ (exhibited at the Dawson Gallery, 1968), a work that refers to the recent deaths of three of his brothers. In the 1960s he experimented with a variety of media – for example, mixing sand with paint to produce unusual textures as in ‘Baghdad’ (1963; Hugh Lane Municipal Gallery of Modern Art, Dublin), a work that shows his exploration of abstraction. He also began to use the technique of collage and to incorporate found objects. Dillon did not confine himself to painting. He produced designs for tapestries and for theatre sets and costumes for productions by the Abbey theatre in the late 1960s. Around this time he began to make etchings at the Graphic Studio, Dublin, which had been set up by Patrick Hickey (qv). He also had literary interests, contributing articles and illustrations to Envoy, the Artist, and Ireland of the Welcomes.

While on a visit to Belfast in February 1971, Dillon suffered a stroke. He died 14 June 1971 at the Adelaide hospital, Dublin, and was buried in Belfast. In 1972 a retrospective exhibition of his work opened at the Ulster Museum, later moving to the Hugh Lane Municipal Gallery of Modern Art, Dublin. In the same year his painting ‘The black lake’ (c.1940; The Arts Council/An Chomhairle Ealaíon), featured on a stamp issued by the Irish post office. His work can be found in all major public collections in Ireland.