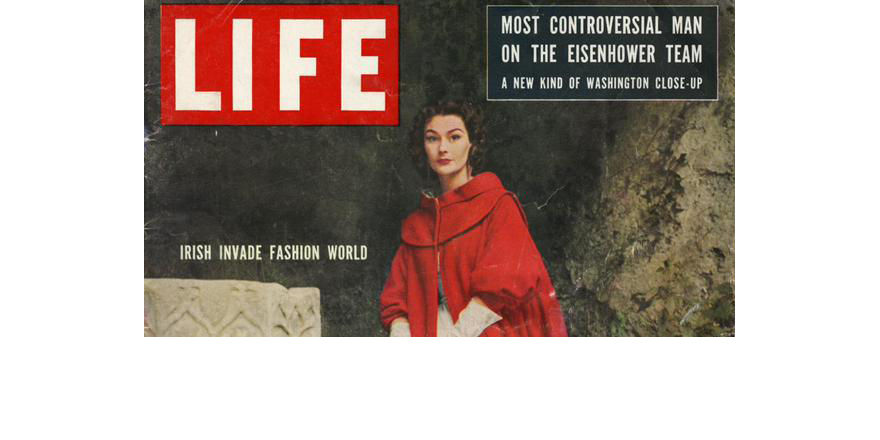 Sybil Connolly on the cover of 'Life' magazine, 1953

Elizabeth Taylor and Jackie Kennedy were among the wealthy and highly influential US clients of Ireland’s first truly international fashion designer.

Here’s a sneak peak at the article:

In 2012 the actor Gillian Anderson made headlines for wearing a caramel-coloured vintage dress to the Bafta awards. The dress, made up of yards of hand-pleated linen, was designed in 1956 by Sybil Connolly, the first Irish fashion designer to come to international attention.

Born in Swansea to Irish and Welsh parents, Connolly trained as a dressmaker in London. She moved to Dublin in 1940 and worked in a managerial role at Richard Alan, but she designed a collection of Donegal tweed dresses for the store in 1952. This collection launched Connolly’s design career. It was her business acumen, however, that propelled her on to the international stage.

Who do you think is the most innovative Irish fashion designer of this era? Tweet us your thoughts @RIAdawson

Take a look at the rest of the series here.

Connolly, Sybil Veronica (1921–98), fashion designer, was born 24 January 1921 at Clanllienwen Road, Morriston, Swansea, Wales, elder of two daughters of John Connolly, insurance salesman, from Waterford, Ireland, and Evelyn Connolly (née Reynolds) from Wales. On the death of the former in 1936, the family moved to Waterford, where she attended the local Convent of Mercy school, but at the age of 17 Connolly, who had already demonstrated a flair for fashion, went to London where she was apprenticed to a dressmaking firm run by two Irish brothers, Jim and Comerford Bradley. In later years, she liked to remember how, as a junior in this establishment, she had held pins at fittings for Queen Mary, widow of George V.

After the outbreak of the second world war, in 1940 Sybil Connolly came back to Ireland and found a job in Dublin at Richard Alan, a business that both manufactured women's clothes and sold them through an outlet on Grafton St. Connolly soon became manager of the latter, a position she retained for more than a decade. Made a director of the firm in 1943, she left it in 1957. In the early 1950s Jack Clarke, the owner of Richard Alan, hired a French-Canadian designer called Gaston Mallet to create a range of clothing for the company, and when he left at short notice in January 1952 the same position was offered to Sybil Connolly. Until then, she had not been known as a designer, but her first collection, shown in spring 1952, was an extraordinary success.

In July of the following year, she came to the attention of the American market when a group of department-store buyers and fashion journalists from the United States visited Ireland and attended a show of Connolly's clothes held at Dunsany Castle, Co. Meath. The castle's chatelaine, Sheila, Lady Dunsany, was an admirer of the designer and so too was the leader of the American party, the Dalkey-born editor of Harper's Bazaar magazine,Carmel Snow (qv), then one of the most influential people in the global fashion industry.

As a result of the Dunsany Castle fashion show, in 1953 Connolly decided to visit the United States, where she made another useful connection, the New York-based fashion publicist Eleanor Lambert, who would thereafter remain one of her closest friends. On that first American journey, the designer established a routine that she followed twice-yearly for the next decade, visiting key cities across the country and showing her latest collection to both private clients and major retailers. The United States quickly became Sybil Connolly's most important market; by 1957 it was estimated that three-quarters of her gross earnings – then estimated at $500,000 – came from trans-Atlantic business. Among her most high-profile clients were not just members of the wealthy Rockefeller, Mellon, and Dupont families, but also Hollywood actresses such as Merle Oberon, Rosalind Russell, Elizabeth Taylor, and Julie Andrews. When Jacqueline Kennedy sat for her official White House portrait in 1970, she wore a Sybil Connolly evening dress.

Sybil Connolly's success owed much to her talents as a keen self-publicist. Famous for her soft-spoken voice and personal charm, she managed to make the sale of clothes to markets previously not open to Irish fashion seem entirely effortless. On many occasions, Eleanor Lambert described her as Ireland's best unofficial ambassador since she promoted her work and her country with equal zeal. Indeed, Connolly always made a point of stressing the distinctively Irish character of her clothes. In large measure, this derived from the fabrics she used, particularly linen. At the start of her career as a designer, Connolly had found a means of finely pleating light handkerchief linen; nine yards were needed to produce one yard of the finished material. Dyed into a wide variety of colours, this was then deployed in the creation of evening dresses and skirts which, thanks to the density of the linen, were enormously resistant to wear and tear.

Pleated linen quickly became the signature element in Connolly's work and remained so for the rest of her life. Indeed, when she moved her home and workrooms to 71 Merrion Square, Dublin, in 1957, she described the property as ‘The house that linen built’. But pleated linen was not the only fabric in her repertoire; the same material, in this instance woven for striped tea towels, appeared in a number of early collections and she also used lightweight tweed and Carrickmacross lace, both made to her specifications.

Sybil Connolly was never a particularly original designer. During her heyday in the 1950s, she tended to follow current international trends and give these a specifically Irish flavour, whether by providing a glamorous interpretation of the traditional Connemara red petticoat or by embroidering motifs taken from eighteenth-century Dublin plasterwork ceilings on to evening skirts. She had an increasingly old-fashioned view of how women ought to dress, one that found little favour from the late 1960s onwards, and as a result demand for her clothes, both in Ireland and overseas, began to decline, although she always retained a small loyal following among affluent Americans. In addition, like many other fashion designers during the second half of the twentieth century, Connolly had to deal with steeply rising costs of manufacture. When she began her career, the low level of wages in Ireland meant her handmade evening dresses could be sold in the United States for approximately $300 each, considerably less than their French and English equivalents. But within little more than a decade, this advantage had been lost.

Sybil Connolly adapted to changing circumstances by turning her hand to other areas of design. While she never completely forsook fashion, she began to work in the field of interior decoration and was responsible for the internal refurbishment of the late eighteenth-century Swiss Cottage in Cahir, Co. Tipperary. She wrote or co-authored several books on Irish homes, gardens, and crafts as well as designing tableware for Tiffany & Co of New York, glassware for Tipperary Crystal, and linens for Brunschwig & Fils. Although her name had been associated with several men in the 1950s, she never married. Sybil Connolly died in Dublin on 7 May 1998 and was buried in Deans Grange cemetery, Dublin. A portrait of her, painted by Simon Elwes, is in the collection of the NGI. The Hunt Museum in Limerick possesses some of her archives and clothes.