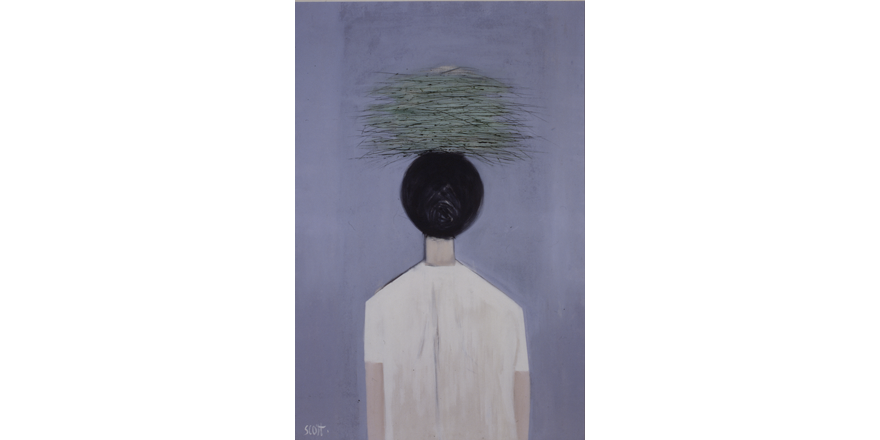 'The painter’s response to the sight of a local girl during a holiday in Italy was an unexpected departure for Irish art'.

This week’s entry in the Modern Ireland in 100 Artworks series features Patrick’s Scott’s Girl Carrying Grasses. A beautiful image which ushered in a new era in Irish art.

Learn more about the Art and Architecture of Ireland project. Watch a short introductory video to the project.

In 1958 the architect, designer and painter Patrick Scott was on holiday near La Spezia, in Italy. He was mesmerised by the sight of a local woman carrying a bundle of grasses on her head at a time when such practices had all but disappeared across a rapidly modernising Europe. Travel abroad from Ireland was limited then, so exposure to such an exotic sight was a rare experience for a young artist. Although he felt uncomfortable witnessing the hard work involved, there was also something about the simple logic of physical balance and harmony that struck a chord. Scott was not the first modernist artist to find inspiration in local traditions and ancient practices, but his response was an unexpected departure in an Irish context.

Scott’s experience translated into a series of paintings of which two in particular were soon to bring him to media attention in rather diverse ways. Scott was one of five artists selected to represent Ireland that year at the Guggenheim International Award exhibition, in New York, and, remarkably, one of his paintings, Woman Carrying Grasses, was purchased by the Museum of Modern Art there. This was the first painting by a living Irish artist to be purchased for MoMA, and the media was quick to report this significant achievement for Irish visual culture.