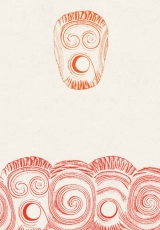 This blank, unlined copybook pictures an archaeological drawing of the 5000 year-old ceremonial flint macehead, discovered in the burial ground of Knowth, Co. Meath, a UNESCO World Heritage site. Archaeological excavations began a Knowth in 1962, and the results of that research are published by the Royal Irish Academy in its ‘Excavations at Knowth’ series of monographs. This copybook reproduces the macehead, a captivating treasure now held in the National Museum, in a rusty red shade.