In 1909-11 Robert Lloyd Praeger brought a team of 100 European specialists from different scientific fields to map the flora, fauna, geology and archaeology of Clare Island, a small, exposed Atlantic island off the west coast. The gathering led to the publication of the path-breaking ‘Clare Island Survey’. A century later the survey was repeated as the 'New Survey of Clare Island' (1992-2009) and both works were published extensively by the Royal Irish Academy.

This volume presents the results of a comprehensive survey of the soils of Clare Island, with chapters outlining the development of soil science and the relevant findings from the first Clare Island Survey; the land-use history of the island and the processes influencing its soil formation; detailed descriptions, classification and mapping of the soils and their associations; the broader relationships with the landforms and topography of the island; and the impact of human activity on the island, both past and present.

Wies Vullings is a specialist in geo-information in spatial planning based in the specialist research Alterra research unit in Wageningen University in the Netherlands. Her PhD research project at University College Dublin was part of the New Clare Island Survey. A detailed soil map of Clare Island was made and relations with topology, geology, archaeology and demography were investigated. She has contributed to New Survey of Clare Island Volume 8: Soils and soil associations (2013).

James F. Collins is a retired lecturer in soil science in the Department of Crop Science, Horticulture and Forestry, University College Dublin. He has contributed to New Survey of Clare Island Volume 8: Soils and soil associations (2013).

On Day 9 of Heritage Week we learn about a common resident on Clare Island, featuring in New Survey of Clare Island, vol. 9: Birds. 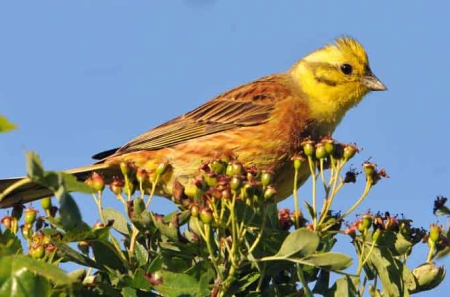 On Day 8 of Heritage Week we introduce a species that is now extinct on Clare Island, featuring in New Survey of Clare Island, vol. 9: Birds.