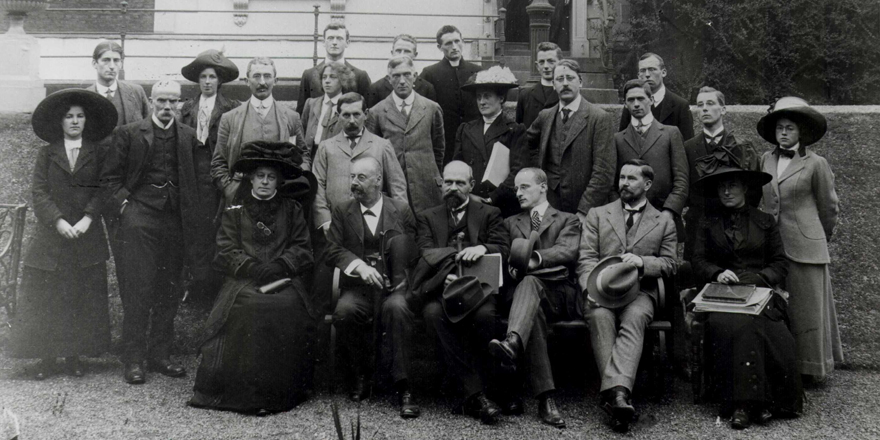 An exhibition exploring aspects of Intellectual Life in Ireland, 1910-1920, through the prism of the Academy collections.

Please note: This exhibition will be closed 21-23 June.

This exhibition examines aspects of scholarship and intellectual life that helped shape cultural understandings of what it meant to be Irish in the early twentieth century. It focuses on authors and published works that helped shape public opinion in diverse, subtle ways in the decade of revolutions and beyond. It also offers insights into what changed and what continued much as before. Though the material that makes up this exhibition has seldom made headlines, it was still fundamental to the emerging Irish nation in all its diversity.

The roots of the 1916 rising go back a long way. The thinkers of the 1848 Young Ireland rebellion were influential, with the writings of Thomas Davis and John Mitchel being particularly important. James Fintan Lalor, too, was highly regarded by those who drafted the 1916 Proclamation. Ballads and songs, published by James Duffy and others in the nineteenth century, popularised nationalist political sentiment.

The work of Conradh na Gaeilge (Gaelic League), from its foundation by Eoin MacNeill MRIA in 1893, with Douglas Hyde MRIA as its first president, was fundamentally important in promoting cultural nationalism. Hyde’s seminal lecture of 1892 on ‘The Necessity for De-Anglicising Ireland’ set the tone for much that followed. The nationalist, Catholic education, with its emphasis on the Irish language, provided by the Christian Brothers was formative in the ideology of Patrick Pearse and his generation. The place of the Irish language in the education system was hotly debated, revealing the extraordinary political significance of the language, and the extent to which it was a contested issue.

Historians as diverse in their interests as Eoin MacNeill and Alice Stopford Green were drawn into political activism, but their writings were their most effective weapon. In Dublin scholarly circles, the Dublin College of Modern Irish and the School of Irish Learning educated a generation of teachers and academics who would promote teaching and research in medieval and modern Irish language and literature. Meanwhile, in London the Irish Texts Society published key texts that nurtured a sense of the significance of the Irish cultural past.

Even in the year of the Rising, scholarship and cultural activities went on. Learned bodies such as the Royal Irish Academy and the Royal Society of Antiquaries of Ireland continued their schedule of lectures and publications, even while some of their members were drawn into the rebellion and others vehemently opposed it. Conradh na Gaeilge hosted its regular (but increasingly politicised) annual cultural gathering in Dublin in August 1916.

The 1916 Rising did not happen in a vacuum; rather there existed a very complex set of overlapping political, military, economic, social, religious and cultural influences that determined its timing, its form, and its outcome. Much has been written about the military and political situation in early twentieth century Ireland, and about the military leaders of the Rising. This exhibition explores some aspects of intellectual life in Ireland in the decade of revolution so as to highlight some less tangible elements of Irish life that shaped public sentiment in the 1910s.

A series of six lunchtime lectures (March – May 2016) accompanies the exhibition. For a list of all the lectures download the leaflet here.