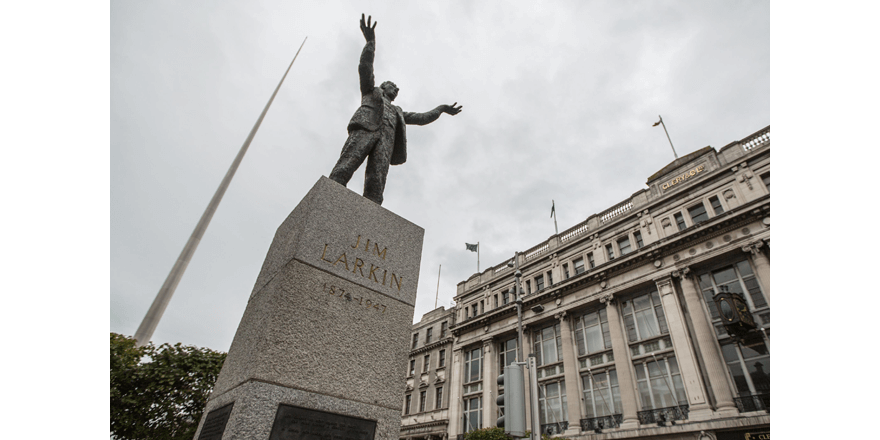 This week’s Modern Ireland in 100 Artworks is the Jim Larkin statue, by sculptor Oisín Kelly.

This public sculpture is considered Kelly’s great masterpiece, with its powerful presence ‘fearless stance and uplifted arms’ you can learn about the artwork and other pieces by Kelly in Art and Architecture of Ireland Vol III.

Read the article in the Irish Times Weekend Review.

Find out about Oisín Kelly’s life in the Dictionary of Irish Biography.

Kelly, Oisín (1915–81), sculptor, was born Austin Ernest Kelly on 17 May 1915 in James St., Dublin, elder of two children and only son of William Kelly, schoolteacher, and Elizabeth Kelly (née McLean). He attended St James's national school, where his father was headmaster, and later Mountjoy School. During his schooldays he became known as Oisín, the result of a mistaken gaelisation of his first name. He entered TCD (1933), where he took a degree in French and Irish. In 1937 he travelled on an exchange programme to study at the University of Frankfurt. Recalling this experience in later years, he spoke of how he was almost entirely unaware of the prevailing political situation in Germany. As a student in Dublin he had already attended night classes at the Dublin Metropolitan School of Art, and he pursued his interest at the school of art in Frankfurt. On returning to Ireland in 1937, he took up a post teaching Irish and French at Clones, Co. Monaghan, where he also took classes in carpentry, laying the technical foundations for his later sculptural work. Subsequently, he taught at Galway Grammar School and at Bishop Foy School in Waterford, where he also studied carving. The pattern whereby he pursued his artistic interests while teaching full-time continued during his time at St Columba's College, Rathfarnham, Co. Dublin, where he taught from 1946 to 1964. He was granted a two-term sabbatical (1947–8) to study sculpture under the English sculptor Henry Moore (1898–1986), to whom he had written asking if he might work as an assistant; in reply Moore offered him a place in his class at Chelsea Polytechnic, London. Though Moore worked in a strongly abstracting style, which influenced Kelly to a certain degree, his insistence on the study of the figure and the importance of empirical observation left a greater mark.

Initially he established his reputation as a sculptor of religious works, an area in which he went on to make a particularly significant contribution to Irish art. His interest in this area was shared by his close friend Evie Hone (qv). He received his first religious commission in 1949 for ‘Our Lady of Fatima’ for Holy Rosary Church, Ennis Road, Limerick. Early Irish art was an important source of inspiration for him in these projects. On occasion he went as far as basing his own work on an early example, as was the case with his ‘Translation from the Kilcorban Madonna’ (Public Library, Bray, Co. Wicklow), which was based on a twelfth-century timber statue. His pine carving ‘Step dancer’ (1947), formerly in the collection of Michael Scott (qv), is an early example of this tendency to stylise his forms in a way evocative of ancient Celtic art, with its emphasis on rhythm and pattern. The figure in movement was to be a recurring theme throughout his career. He also absorbed modern influences such as those of Pablo Picasso and Constantin Brancusi. One of his achievements was to make archaic forms of Irish art relevant to modern artistic practice. Though a devout member of the Church of Ireland, he never saw his faith as an inhibiting factor when working on his many commissions for catholic churches; in fact, it was the universal visual language (as he saw it) of religious art that appealed greatly to him.

A number of public sculptures by Kelly are familiar landmarks in Dublin. His largest public piece was ‘Children of Lir’ (Garden of Remembrance, Parnell Square). The transformation of the children into swans symbolises the transformation of Ireland into an independent state. His studies for this project show he intended it to be more abstract in style; ultimately, however, he felt that this would not find favour with the Irish public. In 1977 he was commissioned to make the statue of James Larkin (qv). This imposing bronze (O'Connell St.) was based on the famous photograph of Larkin by Joseph Cashman (qv). In the following year he received the commission for the ‘Chariot of life’ in the plaza of the Irish Life mall (Lower Abbey St.). He was also responsible for the monument commemorating Sir Roger Casement (qv) which was unveiled in 1984 (Ballyheigue, Co. Kerry). These works allowed him to pursue his enduring concern with specifically Irish subject matter.

He was a regular exhibitor at the Irish Exhibition of Living Art as well as serving as a member of the organising committee from 1951 to 1972. His work also featured often at the RHA; he became a full member of the academy in 1965 and was appointed to the honorary position of professor of sculpture in 1975. In 1972 he was appointed to the board of the National College of Art and Design. He was, however, an intensely private individual with regard to both his professional and private lives. His consequent reluctance to mount a solo exhibition of his work accounts for the fact that it was not till 1978 that one took place; indeed, he always much preferred working to commission. He felt that the artist's role was primarily to fulfil, by means of technical skill, the needs of the patron, and that artistic freedom was only possible in so far as it contributed to realising this aim. In this way he saw all his works as fulfilling a defined function. In turn this led him to see an indivisible relationship between art and craft. This ideal informed his artistic residency at the Kilkenny Design Workshop, which began in 1964 and allowed him to devote himself to art full-time. There he designed textiles as well as pottery and metalwork. It is possible to trace the vision Kelly had of his role as an artist back to the ideas of William Morris and the arts and crafts movement of the nineteenth century. He died suddenly in Kilkenny on 12 October 1981, having suffered a heart attack.

He married (1942) Ruth Gwynn, veterinary surgeon and daughter of E. J. Gwynn (qv), provost of TCD 1927–37. They had seven children, one of whom, Benjamin, was killed in an accident in 1962. Kelly exerted an enduring influence over the succeeding generation by virtue of the generosity with which he gave of his time and advice to young artists. His self-portrait (University of Limerick) captures something of this aspect of his personality with the witty stylisation of the words of the Irish proverb ní thagann ciall roimh aois (sense comes only with age) to represent his long grey beard.