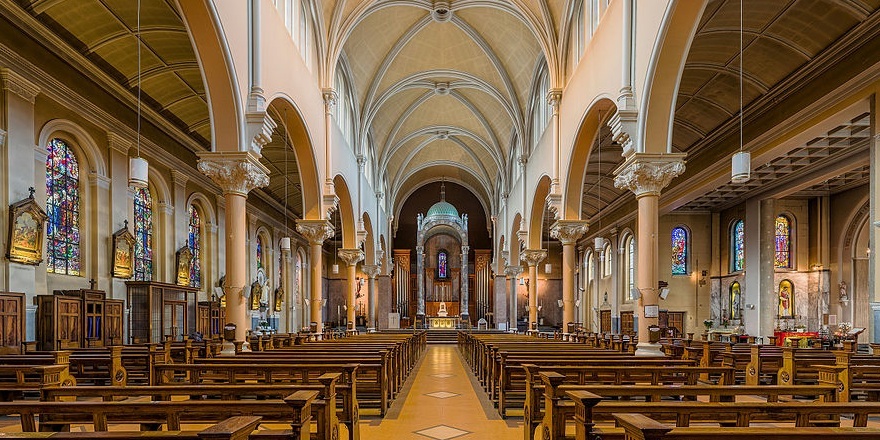 The remains of St. Valentine were disinterred from the cemetery of St Hippolitus in Rome, and brought there in 1836. Read the entry below on John Francis Spratt, the Carmelite priest responsible, by David Murphy for the Dictionary of Irish Biography.

John Francis Spratt (1796–1871), Carmelite priest, philanthropist, and temperance reformer, was born January 1796 in Cork St., Dublin, son of James Spratt and Elizabeth Spratt (née Bollard), and was baptised (5 January) in St Catherine's church, Meath St. His brother James later became an Augustinian friar. He attended a school in Dolphin's Barn and went to Spain (August 1816) as an aspirant in the Carmelite order. Received into the order in December 1816, he completed his noviciate as a member of the Carmelite province of Castille and was ordained (26 February 1820) by Petrus Antonius de Trevilla, bishop of Cordova.

After further theological studies at Seville, he returned to Dublin (1822) and joined the community of Calced Carmelites in Cuffe Lane, off French St., establishing a school in Longford St. He acquired a site in Whitefriar St. and it was largely due to his exertions that the Carmelite church, Our Lady of Mount Carmel's, was built there. Building work was completed in 1826 to a design of George Papworth, and the church was consecrated in 1827. Appointed as the church's first prior, he visited Rome in 1835, and it was due to his efforts that Pope Gregory XVI agreed to send the remains of St Valentine to the Whitefriar St. church. St Valentine had been buried in the cemetery of St Hippolitus, but his remains were disinterred and arrived in Dublin on 10 November 1836, being placed under the altar of Whitefriars. Spratt also acquired in a local antique shop a wooden statue of the Virgin, which later proved to be of late medieval origin. It is believed that this statue came from St Mary's abbey and was the one from which the crown was taken to crown the pretender Lambert Simnel in 1487. Both of these features made the Whitefriar St. church the focus of popular pilgrimages in Ireland.

Spratt is perhaps best remembered, however, for his philanthropic work in Dublin. He founded various charitable institutions such as St Peter's orphanage and the free schools at Whitefriar St. He served as commissioner general of the Carmelite order in England (1838–44). During the famine he organised an interdenominational relief committee and was appointed (May 1849) secretary of the Royal Exchange or General Relief Committee. He was also active politically, and had been involved in both the emancipation and repeal campaigns. Engaged in the campaign to prevent the transportation of William Smith O'Brien in 1849, he was also profoundly interested in the plight of tenant farmers, and attended the tenant-right conference held in Dublin in August 1850.

In 1860 he founded the Catholic Asylum for the Female Blind and rented Portobello House as the charity's premises. Run by the Sisters of Charity, the institution was moved to Merrion Gates in 1868. In 1861 he rented Stove Tenter House off Cork St. and founded St Joseph's Night Refuge for women and children. Appointed provincial of the Carmelite order in Ireland (1863), he became increasingly involved in the temperance movement and was an associate of Fr Theobald Mathew and James Haughton. He founded the French St. Temperance Society, but in 1871 began to suffer from ill-health. Doctors diagnosed circulation problems and recommended that he take alcohol, but he refused to do so. On 27 May 1871, while administering the total abstinence pledge, he died of a sudden heart attack at Whitefriars St. church. He was buried in Glasnevin cemetery, near the tomb of Daniel O'Connell.

He published several theological and devotional works during his career, including The real presence of the body and blood of Our Lord Jesus Christ in the Holy Eucharist etc. (1850) and Eulogium of the Blessed Virgin (1868).