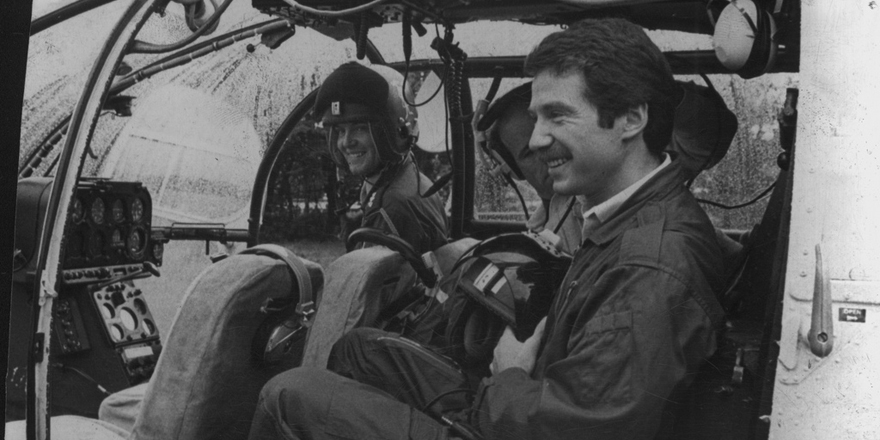 Missing Persons in the Dictionary of Irish Biography – Vincent Hanley

A range of lives feature in the December 2015 ‘missing persons’ update to the Dictionary of Irish Biography online, comprising persons omitted from the 2009 first edition. Read the entry on Vincent Hanley, by Dr Linde Lunney, below.

Hanley, (Luke) Vincent (1954–87), music broadcaster, was born 2 April 1954 in Clonmel, Co. Tipperary, elder son of Michael Hanley and Joan Hanley (née Cleary). His father was a soldier, who served overseas with the Irish army on UN duties. Vincent attended the Sisters of Charity national school and then Clonmel Christian Brothers' High School. As a teenager he acted as disc jockey in discos in Clonmel and then, having left school with no qualifications, had his first job as a DJ at the rowing club in Glenbrook, on Cork harbour. Confident and outgoing, he presented items on Music on the move on RTÉ Radio Cork from 1976; a year later, aged only 23, he was hosting popular shows on the national radio channel, and appearing round the country on live radio shows and as a DJ, often at charity gigs. He did some work on television, especially as a continuity announcer, but in May 1979 appeared as one of the first presenters on the new RTÉ Radio 2 station, with the prime slot on weekday mornings. His enthusiasm for music appealed to young listeners, and his easy chatter and relaxed style charmed a wider listening public; others, however, were irked by his flamboyance and catch phrases, such as 'Kissy kissy'. A novelty record issued in November 1979, a disco mix of Little Eva's 'Loco-Motion' and 'Do you want your ould lobby washed down?' by Brendan Shine, was (perhaps not surprisingly) unsuccessful. The description 'Fab Vinnie' was at first used mockingly by music journalists, but he adopted it as his trademark nickname.

Hanley's decision to leave RTÉ in 1980 as his contract expired was a blow to the station. Ambitious and wanting to develop his career with experience abroad, he spent a short time in London, guesting on Capital Radio and on London Weekend Television. However he soon returned to Dublin and to RTÉ 2 television as co-presenter from July 1980 of a magazine programme called Summerhouse, which appeared again the next summer. From 1982 he was based in New York, but appeared as a DJ in Irish venues over the summer. In 1983 he joined with a former RTÉ colleague, Conor McAnally, to set up the Green Apple production company, investing £1 each in shares as nominal investment capital. Hanley had spotted potential in the new and hugely popular music video channel MTV, launched in the US in 1981, and Green Apple, working on a shoestring, produced a programme called MT USA, which they sold to RTÉ.

The first music video show in Europe, MT USA debuted on RTÉ 2 in February 1984. Showing on Sunday afternoons, and later also repeated late on Friday nights, the programme consisted of three hours of music videos, presented by Hanley, who was filmed in various well-known locations in New York city. It included interviews with music personalities and gossip, intended to give the flavour of life in the music business and its capital city. Running from 1984 to 1986, the programme influenced the music and lifestyle tastes of a generation. Irish advertisers were keen to be associated with its success, and the company developed a range of increasingly varied programmes. Green Apple's turnover went from £45,000 in the first year to £400,000 in 1986, as it made and sold programmes, such as the television quiz show Rapid roulette and The all-electric movie show, to RTÉ, and also supplied technical and production services.

By 1986, however, the presenter's fashionable bomber jackets and plaid shirts could not hide his increasingly gaunt frame; he insisted on continuing to film his introductions though no longer able to stand. Initially refusing to accept the seriousness of his illness, he eventually had to return to Dublin for treatment in St James's Hospital. Hanley did not live openly as a gay man in Ireland, where homosexuality was still illegal and widely disapproved of at the time. On his behalf, friends and family challenged rumours that he was 'dying of AIDS', and it was stated in the Irish Times (20 April 1987) that he suffered from a 'congenital eye complaint [and] cerebral toxo-plasmosis' and had gone blind in one eye. Hanley died on 18 April 1987.

Almost at once, the media announced that Hanley had indeed died of an AIDS-related disease. He was the first well-known person in Ireland to die from a disease arising from HIV infection. The publicity surrounding his death probably contributed to awareness of HIV/AIDS, but also to the near hysteria that characterised most discussion of it. AIDS was the most feared and stigmatised illness of the time.

Hanley's funeral in Clonmel, attended by huge crowds, testified to the affection with which his friends and fans regarded him. A television and radio award named in his honour was presented in 1993 at the Smithwick's Hot Press Music Critics Awards, and in 2012 Clonmel town council unanimously supported a proposal to mark Hanley's birthplace in Kickham Street with a plaque.

The image of Hanley above is used courtesy of 'DF Military Archives', sourced from Flickr, under a CC BY-NC-ND 2.0 (Attribution-NonCommercial-NoDerivs 2.0 Generic) license

All biographies are available at: dib.cambridge.org