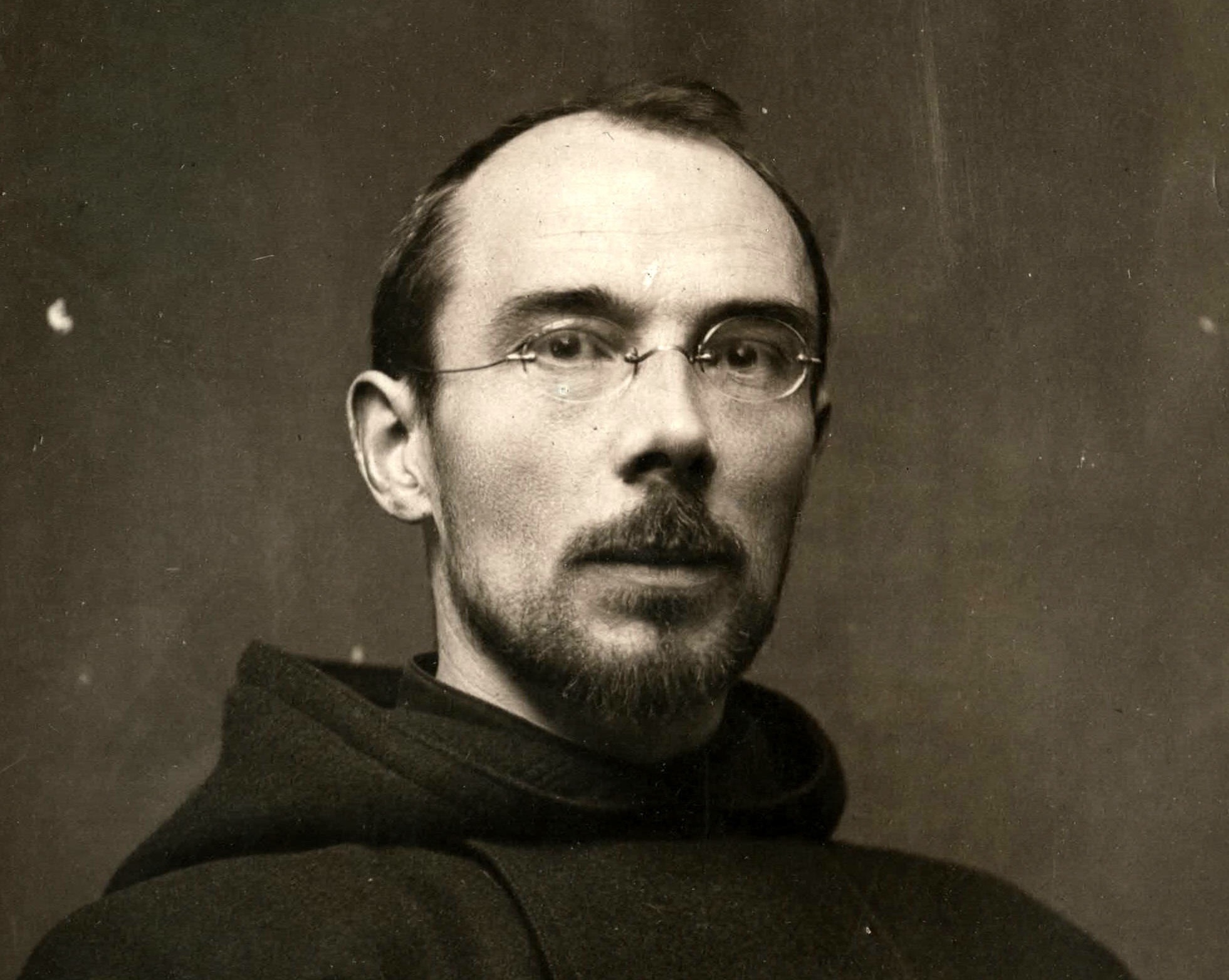 Read the entry on Fr Bibby, a Capuchin friar who ministered to some of the executed rebels of the 1916 rising, below.

Bibby, Father Albert (1877–1925), Capuchin priest and republican, was born Thomas Francis Bibby on 24 October 1877 at 17 Regent Street, Bagenalstown, Co. Carlow, only son among five children of John Bibby, a shopkeeper at that address, and Julia Bibby (née Coogan). Both parents were natives of Kilkenny city, where the Bibbys had a long history as millers and merchants. In his early childhood his parents returned to Kilkenny, where his father had a shop at 17 High Street. Receiving early education from the Christian Brothers, Bibby served mass in the Capuchin Franciscan friary near his home. From age 13 he attended the Seraphic College at the Capuchin friary in Rochestown, Co. Cork, then entered the order's Kilkenny novitiate in 1894, taking Albert as his name in religion. From this time he developed a keen interest and expertise in beekeeping, which he pursued throughout his life. Professing holy vows in 1895 and solemn vows in 1900, he was ordained a Roman catholic priest on 23 February 1902. He was among the first group of Irish Capuchins to receive university degrees, graduating BA from the RUI (1902).

Having spent parts of his post-novitiate formation in Rochestown and Kilkenny, by the time of his ordination Bibby had joined the Capuchin community of St Mary of the Angels on Church Street, Dublin, where he spent a substantial party of his subsequent ministry, including the years 1913–22. The friary's situation in a working-class district occasioned much work among the poor. Taking a special interest in the temperance movement, he conducted temperance missions and retreats throughout the country. An enthusiast for the Irish-Ireland movement, he joined the Gaelic League (Columcille branch) and attained fluency in the Irish language, sometimes mistaken for a native speaker, and often preaching missions in Gaeltacht areas entirely in Irish. He attended the Irish college in Ballingeary, Co. Cork, where fellow students in the July–August 1906 session included Kathleen Sheehy (qv), Thomas MacDonagh (qv), Tomás MacCurtain (qv), Brian O'Higgins (qv), and Pádraig Ó Siochfhradha (qv) ('An Seabhac'). Through his Irish-Ireland activities, he met many of the eventual leaders of the Easter 1916 rising, counting some as personal friends. Owing to such activities, to his general priestly ministry, and to his personal attributes of kindness, amiability and unostentatious piety, he was widely known and esteemed among diverse classes of people in Dublin and beyond. During the first world war, he offered varied assistance to dependants of men in British military service.

In Easter week 1916 the Irish Volunteers occupied several positions in the immediate vicinity of the Church Street Capuchin community, establishing a headquarters and first aid station in the Father Mathew Hall adjacent to the friary. Bibby was among several friars who ministered throughout the week to the physical, emotional and spiritual needs of the insurgents and civilians, especially to the wounded and dying, dividing most of his time between the Richmond hospital and the North Dublin Union (wherein many of the area's residents sought refuge); on the Friday, as fighting in the area intensified, he administered last rites to two youngsters who, upon climbing the union's clock tower, were shot dead by a British sniper. On the Saturday evening, subsequent to the surrender order issued that afternoon by Patrick Pearse (qv) but prior to its receipt by the Volunteer detachment commanded by Paddy Holohan (qv) in North Brunswick Street, Bibby helped arrange an overnight truce in the area to allow evacuation of wounded to the Richmond. (Though in later years some Easter week veterans placed Bibby as one of the friars who helped convey the surrender order to the Volunteer garrisons in Jacob's factory, the South Dublin Union and the Marrowbone Lane distillery, he is not mentioned in accounts of the incident made by two Capuchin confrères; the veterans may have misremembered owing to the esteem commanded by Bibby and his subsequent record during the troubles of 1919–23.)

In the days after the suppression of the rising, Bibby and other friars visited prisoners, both men and women, in Kilmainham jail and Richmond army barracks, offering solace, hearing confessions, and taking messages for their families regarding the prisoners' locations and circumstances (unlike the Kilmainham chaplain, Bibby and his confrères were sympathetic to the imprisoned insurgents). He was among the friars who ministered to the eight rebel leaders executed in Kilmainham on the mornings of 4 and 8 May, and accompanied at least two of them, Michael O'Hanrahan (qv) and Seán Heuston (qv), to the execution yard, witnessing their deaths by firing squad and anointing their bodies. He also consoled the families of the executed men, O'Hanrahan's sister recalling: 'These priests were marvellous. They saved the reason of many people whose sons and brothers were executed' (BMH, WS 270, p. 12). Especially struck by the serenity, heartfelt piety and selfless patriotism of Heuston, Bibby wrote an account of Heuston's last minutes for the Catholic Bulletin that was denied publication under censorship restrictions; a separate account that he wrote subsequently in a letter was published in theCapuchin Annual of 1942 and 1966. In September 1917 he attended the republican prisoners on hunger strike in Mountjoy jail, including Thomas Ashe (qv) shortly before his death from the effects of forcible feeding.

During the Anglo–Irish war of 1919–21, Bibby frequently visited imprisoned republicans. He assisted IRA men on the run to secure safe houses, and carried messages between them and their families. On at least one occasion, he conveyed messages between Michael Collins (qv) and intelligence operatives. On the day prior to the execution of Kevin Barry (qv) (31 October 1920), he led a large crowd of protesting UCD students in a public recitation of the rosary outside Mountjoy jail, and later visited Barry in his prison cell. During a night raid by British military of the Church Street friary (16–17 December 1920), Bibby was arrested and questioned for several hours in Dublin Castle before release. Sympathetic to the anti-treaty position, with his confrère Father Dominic O'Connor (qv) he ministered to the anti-treaty troops who seized the Four Courts in April 1922, and sought to mediate between them and the Free State provisional government. Present in the Four Courts when it was attacked by Free State troops, the two friars accompanied the garrison's wounded to hospital both during the three-day bombardment and siege (28–30 June) and after the garrison's surrender, which they helped negotiate. They then ministered to the anti-treaty garrison in the Hammam Hotel. Over ensuing months, Bibby visited imprisoned anti-treatyites. His 'diary' outlining events in the Four Courts during the first day of the bombardment and published later that day in a republican organ infuriated Free State authorities and was cited as an 'abuse of sacred office' linking catholic piety with 'the forces of anarchy' in an official complaint (21 July 1922) to Archbishop Edward Byrne (qv) of Dublin about Bibby's and O'Connor's activities (Murray, 142–3).

In November 1922, one month after the episcopal interdict upon provision of the sacraments to anti-treaty republicans, Bibby was transferred to Rochestown, where he was denied exercise of diocesan faculties; he claimed to have been told by the Capuchin provincial that no bishop in Ireland would grant him faculties. In a letter and statement (12 August 1923) to the order's minister general protesting against such 'penalisation', including a recent decision to transfer him to America, he attested to his 'absolute impartiality' throughout the troubles commencing in 1916: 'My mission as a priest was not to any one section or party, it was to “embrace all in one sentiment of charity”' ('Case of Father Albert', p. 2). After a period assigned to a parish in Ilford, Essex, assisting in parochial work, he was duly transferred to California in June 1924.

Gentle and retiring, Bibby was an idealist with a strong mystical bent; it was said that he had such little regard for the small things in life, that their deprivation posed no obstacle to his pursuit of an ideal. Thin, gaunt, and ascetic in appearance, he wore spectacles and was moustached with a trim goatee beard. Frail in constitution, during his time in Church Street he survived a serious bout of enteric fever, and was enfeebled by the years of mental and emotional strain he endured during the troubles (concerns for his health were the ostensible reason for his transfers to Ilford and America). After several months in California, he was made the first superior of the Capuchin community at Santa Inés, one of the twenty-one California missions founded by Spanish Franciscans in the eighteenth and early nineteenth centuries, located in the town of Solvang, and recently transferred to the Irish Capuchin province. Falling seriously ill, he was hospitalised for several weeks in Santa Barbara, where he died 14 February 1925. In June 1958 his remains and those of Father Dominic, who also had been transferred to America, were repatriated to Ireland, funded by the Old IRA in the USA and Ireland. Flown via New York to Shannon, the remains were received amid much pomp and conveyed by cortege to Cork city; after solemn requiem mass in the Capuchin's Holy Trinity church, attended by President Seán T. O'Kelly (qv), Taoiseach Éamon de Valera (qv), and other dignitaries of church and state, they were reinterred in the Rochestown friary, outside Cork.