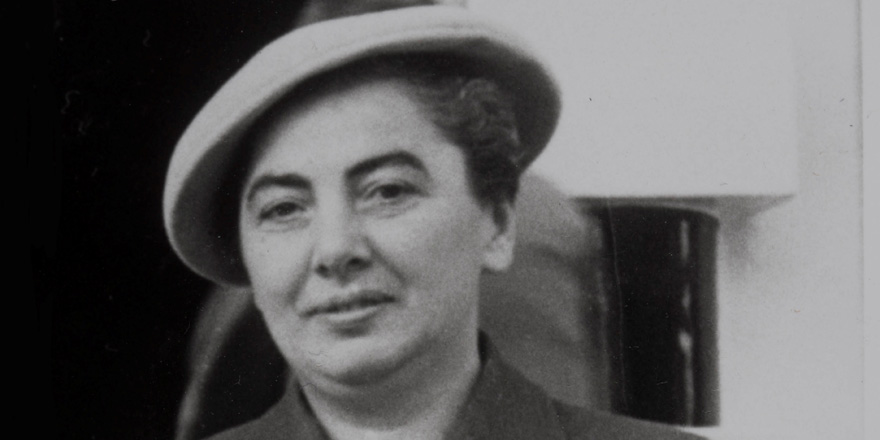 Missing Persons in the Dictionary of Irish Biography – Pearl Dunlevy

A range of lives feature in the December 2015 ‘missing persons’ update to the Dictionary of Irish Biography online, comprising persons omitted from the 2009 first edition. Read the entry on Pearl Dunlevy, a tenacious public health physician who tackled childhood TB in Dublin, below.

By this time Dunlevy had already established (1945) Dublin Corporation's primary TB clinic at the Carnegie Trust Child Welfare Centre in Lord Edward Street. Isolating children from the dangers of infection when attending the waiting rooms of adult TB dispensaries, the clinic aimed to identify and immediately treat children with TB, successfully minimising their admission to sanatoria (the 150 beds in Dublin were subject to endemic waiting lists). Appointed a Dublin Corporation TB officer (1947), Dunlevy managed a mass x-ray (radiography) programme and commenced tuberculin testing to assess TB infection rates and the likely loci of transmission, aiding identification of the source of infection (usually familial, and linked to crowded housing conditions). She was appointed assistant medical officer for Dublin city (1948), later lamenting that throughout the 1950s medical staff were paid less for tuberculin testing of patients than veterinarians were for the testing of cattle (Dunlevy, IMT, 18 June 1982).

To harness her reputation for organisational and clinical rigour, Dunlevy was handpicked to spearhead a childhood BCG vaccination scheme in Dublin. Her clinical and diagnostic experience (alongside her high regard for the instructive bureaucratic, statistical and medical rigour she had observed in Denmark's public health system) formed the basis of her epidemiological studies, which greatly improved the scheme's effectiveness. Pulmonary TB was then widespread among expectant mothers; the incidence of TB in the city, rising during the wartime emergency, peaked in 1947. Children under five years of age experienced the highest mortality; of the 138 childhood TB deaths in the city in 1947 (81 of which were due to tuberculosis meningitis), 101 were aged five years or less (Dunlevy, IMT, 29 September 1979). Emanating from a Medical Research Council of Ireland committee tasked (1946) with assessing TB treatments and the utility of vaccination (BCG vaccination was first undertaken in Ireland by Dorothy Price (qv) at St Ultan's Hospital for Infants from 1937, ceasing at the onset of the emergency in 1939), the Dublin Corporation BCG vaccination scheme commenced in October 1948. Initially focusing on newborn children of TB-infected parents, the scheme gradually expanded to include all newborn children, student nurses and medical students, and later the staff and students of residential schools. By 1949, with radiological screening rapidly identifying those in need of treatment at St Ultan's, childhood TB deaths decreased to 46 (one-third of their 1947 total.)

Concentrating on children who came into close contact with TB sufferers in the home and family, the locations of TB deaths were reported in weekly returns from the general registrar, generating insightful geographical data on the location and spread of infection, facilitating the accurate targeting of specific households, schools and institutions for TB treatment and BCG vaccination. Drawing on a newly cooperative relationship between the Dublin voluntary hospitals and Dublin Corporation, rigorous record-keeping allowed accurate delineation of those receiving the vaccine, valuable when conducting post-mortem investigations into suspected TB deaths in the city. James Deeny (qv) later recalled that 'Dunlevy built up from nothing the highly efficient, beautifully organised Dublin scheme, which ran like clockwork, was availed of widely, produced no unfavourable incidents, reduced childhood tuberculosis to vanishing point, and lowered dramatically the awful incidence of tuberculosis meningitis in babies in Dublin. All this was carried out during the very difficult post-war conditions in the city' (Deeny, IMT, 26 February 1982).

Dunlevy was a member of the committee (1948) and of the ensuing government-established limited company (Hospital's Associated Ltd (1949)) that designed and built a TB sanatorium at Ballyowen, Lucan, Co. Dublin, for childhood TB treatment. The success of the Dublin BCG scheme necessitated the late alteration of the plans and function of what became St Loman's Hospital to serve adult TB patients instead. The scheme was extended to those newborns exposed to TB at the Rotunda (September 1950) and the Coombe (1951) maternity hospitals, and then to all newborns (from 1954). The first such local authority scheme in Ireland or Britain, the Dublin Corporation BCG scheme by 1953 had reduced childhood TB deaths by 82 per cent (Deeny, Tuberculosis in Ireland, 235). With parental consent always being sought, over 85,000 children were vaccinated between October 1948 and October 1958, without a single death from TB amongst the group (Dunlevy, BMJ, 27 December 1958). Any childhood deaths from TB in the city, ranging from one to three annually, were among the unvaccinated.

Dunlevy idolised Price, both of whom looked to Scandinavia (Denmark and Sweden respectively) as they wrestled with appalling TB death rates (remaining almost static from 1920 to 1945) for infants aged up to one year. By contrast, conservative (and male) Irish medics took their lead professionally and medically from Britain, which was less exercised by TB and the utility of the BCG vaccine. The support of Deeny, the state's chief medical officer (1944–50), and of Noel Browne (qv), minister for health (1948–51), alongside the impact of the newly established (1947) Department of Health, contributed to the success of the Dublin BCG scheme. Furthermore, the deployment of emergent combinations of antibiotics, the impact of mass diagnostic radiography/x-ray programmes, and the notable increase of sanatoria beds through the 1950s all contributed to a wider decline in TB infection. Appointed (1949) by Browne to the national BCG committee, which under John Cowell (qv) gradually expanded BCG vaccinations nationwide concurrently with the separate Dublin scheme, Dunlevy outlived many of her early collaborators to attend the last meeting of the committee in December 1978.

She served effectively as senior assistant chief medical officer in the Dublin Health Authority (1960), which unified all health and public assistance services for Dublin city and county in charge of immunisation services across the city (1960–71). As TB, diphtheria and other infectious diseases gradually receded, from 1965 Dunlevy oversaw a polio vaccination programme in Dublin. She also addressed the epidemiology of rubella (German measles), leading from 1971 a Dublin rubella vaccination scheme for girls aged 12 to 14. Continuing to work closely with the Dublin maternity hospitals, at the end of 1972 she introduced a rubella screening program for those in early pregnancy.

Observing elevated numbers of minor adverse reactions among vaccinated children which were discouraging their mothers from bringing them for subsequent necessary booster injections, Dunlevy was involved with a subsequent 1973 trial led by virus experts Patrick Meenan (qv) and Irene Hillary. A combined diphtheria, tetanus and pertussis (whooping cough) vaccine developed by the Wellcome Laboratories was tested in this regard on fifty-three children housed across five Dublin residential institutions, against a control group of sixty-five children living at home, given a variant vaccine. No significant difference was observed between the two groups and the trial remained unpublished. It has been the subject of repeated controversy regarding both the lack of consent (not then statutorily required) recorded for the institutional participants, and concerns about the safety and impact of certain batches of vaccines used (Ir. Independent, 26 June 2001; Commission to inquire into child abuse (December 2003)).

Garnering an international reputation, Dunlevy attended conferences in the UK and Europe presenting on her work. She published in the prestigious French journal Revue de la tuberculose (1951) and undertook further postgraduate training in Paris (1954). Focusing on childhood epidemiology, vaccination and public health, her many papers appeared in the British Medical Journal, the Journal of the Medical Association of Éire, the Irish Journal of Medical Science, and the Journal of the Irish Medical Association. She served as deputy chief medical officer in the Eastern Health Board from 1971 until her retirement in September 1976. Having contributed 'Medical families in medieval Ireland' to What's past is prologue: a retrospect of Irish medicine (1952; ed. William Doolin and Oliver Fitzgerald), into retirement Dunlevy wrote a regular column for the Irish Medical Times, demonstrating her expansive knowledge of the history of medicine in Ireland from ancient times. Highlighting the distinct needs of those with physical and mental impairments, and other vulnerable citizens, Dunlevy viewed with growing concern the decline in parents availing of childhood immunisation schemes for their children, as the pernicious diseases they helped eradicate receded from public and official view.

Elected the first woman president (1951–2) of the Biological Society of the RCSI, she discussed 'The prevention of tuberculosis' in her inaugural address. A long-time examiner for the RCSI's diploma in child health, president of the Irish Society for Medical Officers of Health, and a committee member of the 'women's federation' of the Irish Medical Association, she was a member (1978) and fellow (1980) of the RCPI, as well as a member of the faculty of community medicine of the RCPI, and a fellow of the RAMI.

Having been nursed by her long-time companion Kathleen Hughes, Margaret Dunlevy died 3 June 2002 in Dublin, and was buried in Shanganagh cemetery. Her elder sister Annie ('Nan') Josephine Dunlevy (1903–88), born in Co. Donegal, graduated from the RCSI in 1931; two of their brothers also became doctors. Annie Dunlevy practised as a psychiatrist in Donegal and Dublin, lectured in anatomy at the RCSI, and lived for many years at various Dublin addresses with her sister. Mairéad Dunlevy (qv) was their niece.

A new entry, added to the DIB online, December 2015