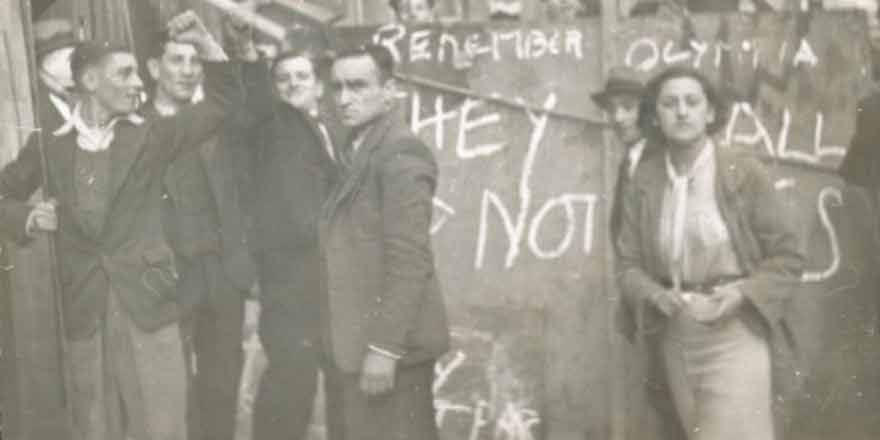 The DIB in the news: The battle of Cable Street

Eighty years ago, on 4 October 1936, Dublin-born Morry Levitas helped prevent a fascist march through London’s East End through his part in the battle of Cable Street.

Levitas and his brother Max (now aged 101) were among the hundreds of thousands of anti-fascists – Jews, trade unionists, leftists and Irish dockers – who mobilised against the planned march by Oswald Mosley’s Blackshirts into the predominantly Jewish East End. Soon after, Morry Levitas was fighting as an international volunteer on the republican side in the Spanish civil war.

Read the DIB entry on Morry Levitas by Lawrence White below:

Levitas, Maurice (‘Morry’) (1917–2001), communist, was born 1 February 1917 at 8 Warren St., Portobello, Dublin, one of four sons and one daughter of Harry Levitas, native of the shtetl (village) of Akmeyan, Kovno (Kaunas) province, Lithuania, tailor's presser and sometime dealer in scrap metal and rags, and Leah Levitas (née Rick), native of Riga, Latvia. His parents – both of whom fled the anti-semitic repression of tsarist Russia – met and married in Dublin, whither each had emigrated to join relatives (c.1912). Members of his paternal extended family who remained in Lithuania were killed when their synagogue was burned in a pogrom, and members of his maternal extended family in Latvia died in Nazi concentration camps. Raised in considerable poverty in a predominantly Jewish area of artisan housing – after the death of their landlord the family moved to single-room accommodation at 13 St Kevin's Parade – he was educated at St Peter's Church of Ireland national school. His father, a communist supporter, and two uncles were active in the International Tailors’, Machinists', and Pressers’ Trade Union, the so-called ‘Jewish union’ quartered in the synagogue building, 52 Lower Camden St. Immersed in a milieu of socialist politics, Jewish culture, and the Yiddish language, Levitas acquired a passion for learning and argumentation, and a vast repertoire of Yiddish songs and stories.

Unemployment prompted the family's moves to Glasgow (1927), and to London's east end (1931), where Levitas commenced work first in upholstery shops, then on building sites as a plumber's labourer. Reacting against the intensified east-end activities of Oswald Mosley's British Union of Fascists (‘Blackshirts’) following Adolf Hitler's accession to power in Germany, Levitas joined (1933) both the Communist Party of Great Britain (CPGB) and the Young Communist League, becoming secretary of the latter's Bethnal Green branch. He was involved in clashes with the Blackshirts, culminating in the famous ‘battle of Cable Street’ (4 October 1936), when communists and other leftists prevented a Blackshirt march through Jewish east-end neighbourhoods. Volunteering (December 1937) for the Spanish republican army in that country's civil war, he served in the British battalion of the XV (International) Brigade, first seeing action in the final days of the unsuccessful defence of Teruel. He was among the troops forced to retreat from Belchite on the second day of the massive nationalist Aragon offensive (10 March 1938). After three weeks of costly engagements and repeated withdrawals, he was in a republican company (which also included Frank Ryan (qv)) that was captured by a mechanised Italian fascist unit at Calaceite (31 March 1938). Imprisoned at San Pedro de Cardeña, near Burgos (April 1938–January 1939), in addition to interrogations, arbitrary beatings, and mock executions, he was subjected to the indignity of pseudo-scientific measurements by visiting German Gestapo agents testing Nazi theories regarding the physiognomy of Jews and ‘social deviants’. Transferred to San Sebastian prison (January–February 1939), he was among sixty-seven republicans released in a prisoner exchange sought by Mussolini. Soon after returning home to London, he visited Dublin to address a public meeting calling for the release of Ryan (27 February).

Though rejected as a ‘premature anti-fascist’ in his initial efforts to enlist in the British military during the second world war, eventually he served in India and Burma with the Royal Army Medical Corps (1942–7). After resuming civilian employment as a plumber (1947–8), he qualified in an emergency teachers’ training college (1948–9), thereafter teaching in secondary modern schools in Kensington, Southwark, and Lincolnshire (1949–66), frequently employing drama to engage difficult pupils. He obtained an honours B.Sc. in sociology as an external student of London university (1958). An effective soapbox orator, able to engage an audience's attention within moments, as long-time secretary of the CP's Hammersmith branch he opposed the 1968 Soviet-led invasion of Czechoslovakia. Senior lecturer in the sociology of education at Durham university (1966–c.1982), he wrote the frequently translated Marxist perspectives in the sociology of education (1974). After retirement he moved to East Germany, teaching English at the Karl Liebknecht Hochschule, Potsdam (1985–90). Returning to London after the collapse of the communist system in East Germany, he joined the New Communist Party of Britain, being especially active in demonstrations against racism. He translated and edited the polemic Erich Honecker cross-examined (1992), denouncing as a show trial the proposed prosecution of the former East German chief-of-state, and emphasising his anti-fascist record and ten years’ incarceration by the Nazis.

In his later years Levitas renewed ties with his native Dublin, attending functions honouring the Irish who served in the Spanish republican cause, and the unveiling of the statue of James Connolly (qv) in Beresford Place. He returned to Spain to accept Spanish citizenship conferred on all surviving international brigade veterans (1996). Levitas married first Liz Scott; they had two sons and two daughters. After her death, he married secondly Jackie Litherland; they had one son and one daughter. Neither marriage can be dated. He died 14 February 2001 in London. His elder brother Max Levitas, also born in Dublin (1915), served for many years as councillor for the London borough of Stepney (1945–70), being thus one of the most electorally successful public representatives in the history of the CPGB.

image: Barricades on Cable Street, 1936. “They Shall Not Pass! Remember Olympia!. Credit – libcom.org