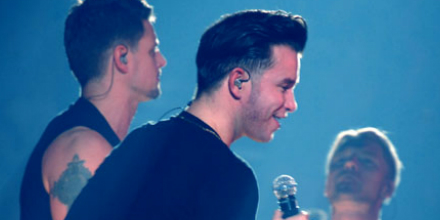 Proud son of Dublin's North Wall community, a member of one of Ireland's most successful musical exports, Gatley enjoyed a successful stage and tv career before his death in 2009.

Read the Dictionary of Irish Biography entry by Lawrence White below.

Gately, Stephen Patrick (1976–2009), pop singer and entertainer, was born 17 March 1976 at the Rotunda hospital, Dublin, third son and fourth child among four sons and one daughter of Martin Francis Gately, house painter and decorator, and Margaret Gately (née Martin), homemaker and part-time cleaner. The family lived in a flat in St Laurence's Mansions, Sheriff Street, in the North Wall district of the Dublin docklands, before moving in Stephen's childhood to a house on nearby Canon Lillis Avenue. Stephen received primary education at St Laurence O'Toole's junior boys school and CBS (remembered by teachers as 'an absolute diamond, and a very, very good kid at school' (Ir. Times, 17 October 2009)), and secondary education at North Strand Technical College. While quiet, shy and introverted, he exuded energy and charisma when performing, and from his early teens appeared in plays and musicals at school, in a local youth club, and with an amateur dramatic group, and took a summer acting course at the Gaiety theatre. He joined a troupe that won the all-Ireland disco dance finals when he was 13, and in his mid teens modelled in fashion shows at department stores and Butlin's holiday camp in Mosney, Co. Meath.

In November 1993 Gately competed successfully among several hundred hopefuls in open auditions for places in a boy band being formed by impresario Louis Walsh, modelled on the hugely popular Manchester-based band Take That. The day after selecting a six-boy line-up, Walsh over-eagerly debuted his band, named Boyzone, dancing freeform to a generic disco backing track, before a bemused audience and a sardonic Gay Byrne on RTÉ television's Late late show. After swift line-up changes reduced the band's numbers to five, Walsh honed the act in live club performances, largely in Northern Ireland, before signing the band to a recording contract with Polygram. During this gestative period, Gately left school in January 1994 before sitting the leaving certificate, and worked part-time in a Dublin clothing store.

Boyzone's debut single, 'Working my way back to you' (released in May 1994, covering a 1960s Four Seasons hit), reached no. 3 in the Irish charts. Their next release, 'Love me for a reason', was the first of four straight Irish no. 1s in 1994–5, each of which peaked in the UK charts at no. 2 or no. 3. Upon the breakup of Take That in 1996, Boyzone swiftly succeeded them as Britain's leading boy band. Their seventh single, 'Words' (October 1996, covering the Bee Gees 1968 hit), was their first UK and fifth Irish no. 1, and also their first success outside Britain and Ireland: a top ten hit in six other countries, and no. 6 in the Eurochart. Addressing the target audience of pre-pubescent and early teenaged girls, Walsh dictated every aspect of the band's publicity, image and repertoire. Strictly a vocal, not an instrumental, combination (the term 'boy band' being an alliterative misnomer), Boyzone performed the genre's standard fare of love ballads and upbeat dance numbers (their mix inclining somewhat to the former), while slickly produced music videos highlighted dance moves and the boys' handsome looks. Boyzone released seventeen singles (1994–9), each of which made the Irish top three, with eight reaching no. 1; all sixteen of their UK releases entered the top four, with six at no. 1. Their four albums all topped the UK charts; the fourth, By request, a greatest hits compilation released in May 1999, sold four million copies worldwide (nearly two million in the UK alone), and was the second-best-selling album of the year in Britain. Boyzone were thus one of the top combinations of the 1990s international boy band craze, and one of Ireland's most successful pop music exports.

Short in stature and slight in physique, with delicate, cherubic features, Gately was in both appearance and crafted image the most boyish of the 'boyz'. Cast as kid brother of the group, gentle and sensitive, 'the dreamy one … cheeky and charming … [with] an innocence, a devilish purity' (Orla Tinsley, Ir. Times, 19 October 2009), he appealed especially to the younger segment of the fan base. Though he had soloed or shared lead vocals on a couple of the group's earliest hits, by the end of 1995 Walsh had moved Ronan Keating to the forefront as lead vocalist, in preference to Gately, who thereafter was second lead, sometimes trading vocal lines with Keating, occasionally soloing a stanza or two of the lyric. (The other three band members were confined to backup vocals. After the band's dissolution, Walsh assessed Boyzone as 'Ronan, Stephen and three Ringo Starrs' (Observer, 1 December 2002).) Gately's most prominent vocal turn came on 'No matter what' (1998), a UK and Ireland no. 1, on which he shared lead vocals with Keating; the single's release coinciding with a West End revival of the Andrew Lloyd Webber stage musical 'Whistle down the wind', for which it was originally written, and also appearing in the soundtrack of the film Notting Hill (1999), the record sold three million copies worldwide and entered the Billboard charts to become Boyzone's only USA hit.

In June 1999 the Sun newspaper ran an exclusive interview in which Gately revealed that he was gay, and was involved in a relationship with Dutch boy-band singer Eloy De Jong. The interviews pre-empted a likely unauthorised article exposing Gately's sexual orientation, as a former Boyzone bodyguard had peddled the story to the tabloid. Having become aware of Gately's homosexuality in 1995 (about the time Keating was moved into lead vocals), Walsh 'got him some borrowed time' (Observer, ibid.) by such stratagems as feeding the press with stories and photos spuriously linking Gately to a series of female celebrities, and conspiring with one tabloid not to publish the story in exchange for other exclusives. Bespeaking the profound social, let alone musical, conservatism of the boy band genre, Walsh later speculated that he probably would not have selected Gately for the band had he then known about his sexual orientation.

When Boyzone broke up in 2000, Gately launched a solo career with a UK and Irish top ten single, 'New beginning'. An album of the same name included the track 'Bright eyes', initially recorded for the animated television series Watership Down, in which Gately had voiced the character Blackavar in three episodes (1999). His second solo single, 'I believe' (October 2000), appeared in the soundtrack of the film Billy Elliot. Dropped by his record label in 2001, he undertook stage and television work. He had the title role in a new production of the Lloyd Webber musical 'Joseph and the amazing technicolor dreamcoat', which had a seven-month West End run (February–September 2003); the production received an Olivier nomination for best musical revival (2004). In a departure from type, Gately played a 'baddie', the Childcatcher, in 'Chitty Chitty Bang Bang', a stage musical based on the 1968 film, joining the cast for six months (September 2004–March 2005) of the show's record three-and-a-half-year run at the London Palladium. He appeared in a Christmas 2005 pantomime, 'Cinderella', at the Churchill Theatre, Bromley; as the Scarecrow in 'The wizard of Oz' at the Marlowe Theatre, Canterbury (April 2006); and as Jesus in a touring production of 'Godspell' (2007). A regular presenter and interviewer from 2007 on the British television channel Film 24, he was a celebrity contestant on several television competition programmes. He twice co-hosted Dublin's annual Childline concert (2006–07).

Boyzone reunited for the BBC's Children in Need appeal (November 2007), followed by a reunion tour of Britain and Ireland (May–August 2008), and a top ten comeback single in both countries, 'Love you anyway' (October 2008). Their next single, 'Better' (December 2008), was accompanied by a video depicting each band member in intimate scenes with a fictional lover, including scenes of Gately serenading and embracing a male partner; the record failed to crack either the UK or Irish top twenty.

Gately and his partner, businessman Andrew Cowles, had a commitment ceremony in Las Vegas (2003), and entered a formal civil partnership in London (2006). On 10 October 2009 Gately was found dead by Cowles in their holiday apartment near Port d'Andratx, Mallorca, Spain. A post-mortem examination indicated immediate cause of death as acute pulmonary oedema, arising from unknown but natural causes. Owing to various indicators, the death has been attributed to sudden arrhythmic death syndrome (SADS). Gately's sister Michelle, who was subsequently diagnosed with a congenital heart condition regarded as a SADS risk factor, founded the Stephen Gately Trust to raise awareness about the syndrome and to raise funds to purchase defibrillators for wide distribution. The studio album that Boyzone were recording at the time of Gately's death was dedicated to him under the title Brother (2010); his vocals appeared on two tracks, one of which, 'Give it all away', was an Irish no. 1 as a single release. A children's fantasy novel that Gately was writing was published posthumously as The tree of seasons (2010).

Gately's success was a source of immense local pride within the economically deprived North Wall community in which he was reared, as evidenced by the mourning occasioned by his death. He was among the first of many prominent Irish men and women, largely in the spheres of entertainment, the arts, journalism, politics and sport, who came out publicly as gay, thus contributing to the gradual normalisation of homosexuality in Irish life, and helping to effect the revolution in public opinion that resulted in passage by referendum on 22 May 2015 of the marriage equality amendment to the constitution, extending civil-marriage rights to same-sex couples.