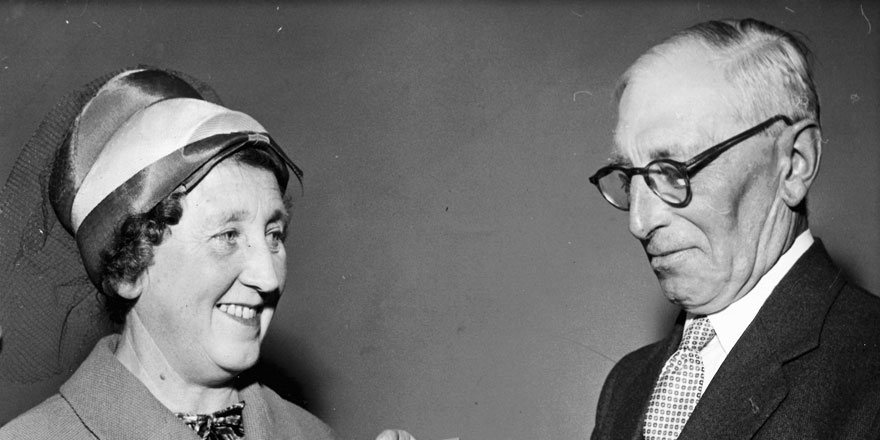 'Women on Walls' is a campaign by Accenture in partnership with the Royal Irish Academy that seeks to make women leaders visible through a series of commissioned portraits that will create a lasting cultural legacy for Ireland in 2016.

Read the Dictionary of Irish Biography entry on Phyllis Clinch, by Rob Bohan and Linde Lunney, below.

Clinch, Phyllis E. M. (1901–84), scientist, was born 12 September 1901 in Rathgar, Dublin, the fourth daughter of James and Mary Clinch. She entered UCD in 1919 and graduated B.Sc. (1923) in chemistry and botany, achieving first place and first-class honours, and was awarded a postgraduate scholarship. She was the first student supervised by the newly appointed professor of botany Joseph Doyle (qv). In 1924 she was awarded an M.Sc. and in 1925 she received a research fellowship from Dublin county council. She undertook further postgraduate study, in plant physiology, under V. H. Blackman at Imperial College in London, concentrating on the biochemistry of the Coniferales. She was awarded a Ph.D. (1928), and worked with Alexandre Guilliermond in the Sorbonne on cytology (1928–9). In 1929 she was appointed a research assistant in the department of plant pathology at UCD. During the 1930s she achieved international fame in her field for her achievement in unravelling the complex of viruses in the potato. As a direct result of her work, growers were able to obtain stocks of virus-free potatoes, and the profitability of the Irish potato industry increased very considerably. Later she turned her attention to tomatoes, describing six viruses, and then worked on sugar beet pathogens; in 1943 she was awarded a D.Sc. on the basis of her published work.

In 1949 Clinch was appointed a lecturer in the botany department at UCD, and in 1961 she succeeded Doyle as professor. They had worked together on planning the botany department on the college's new Belfield campus, and Clinch oversaw the move from Merrion Street in 1964. Her teaching and leadership were important factors in the department's rapid expansion and its research output during her time. In 1942 she was elected a member of the scientific committee of the RDS, and served on its council (1973–7), and as vice-president in 1977. On 30 March 1961 she was the first woman to be awarded the Boyle medal by the RDS, in recognition of her scientific achievements. One of the first four women elected members of the RIA in 1949, she served on the academy's council (1973–7) and as vice-president (1975–7). In 1971 she retired from UCD, and died 19 October 1984, on holiday in Tenerife.