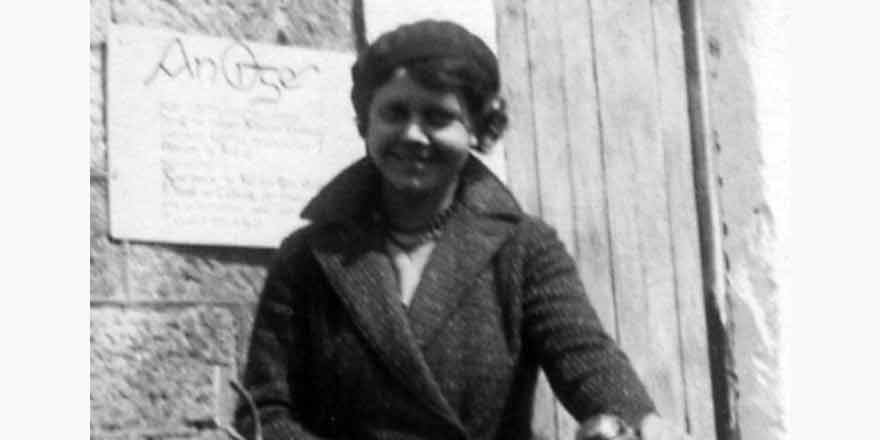 Read the Dictionary of Irish Biography entry on Françoise Henry, by Hilary Richardson, below.

Henry, Françoise (1902–82), specialist in early Irish art, archaeologist, and art historian, was born 16 June 1902 in Paris, the only child of René Henry, deputy chef de cabinet to the president of the French chamber of deputies, professor at L'École des Sciences Politiques, and writer on European issues, and Jeanne Henry (née Clément), both of Paris. Her father left when she was young, so that her mother's family of Swiss French protestant stock was the main influence in her upbringing and notably gave direction to her life's work. Her grandfather, Charles Clément (1821–87), was a philosopher and writer on art, and often as a child she stayed at her grandmother's house near Paris, where she was surrounded by paintings and heard discussions on art as an everyday occurrence. Clément had studied under the painter Gleyre (1806–74), a fellow Swiss in whose studio Renoir, Bazille, Sisley, and Monet first met, later on at the genesis of impressionism. After study abroad and working as assistant curator of what afterwards became the Musée des Antiquités Nationales at Saint-Germain-en-Laye, Clément classified the objects and published a Catalogue des bijoux. He also wrote art criticism for the Journal des débats from 1863 until his death, and monographs on painters of the Italian and French schools, including Géricault. His friend Gleyre had bequeathed the contents of his studio to him. All Clément's attributes seem to reappear in his granddaughter, even to his love of gardening.

Following secondary school at the Lycée Molière in Paris (1914–20), Henry graduated from both the École du Louvre (1925) and the Sorbonne. At the former, out of interest, she covered both the ancient and modern sections of the course. She attended lectures of great scholars, such as Salomon Reinach, André Michel, Robert Rey on modern painting and Henri Hubert, the celticist, for whom she acted as assistant at the Musée des Antiquités Nationales, eventually joining the staff in 1927. Proceeding to her doctorat d'état, her secondary thesis was a comprehensive survey of prehistoric burials in the Côte d'Or. Her teachers in Carolingian and medieval art at the Sorbonne were Emile Mâle and his successor Henri Focillon, from 1924. Focillon was an inspiring mentor, and his preoccupation just then with the origins of Romanesque art provided an exciting workshop for students.

An invitation to Tipperary in summer 1926, from an Irish friend staying at Saint-Germain, determined not only the subject of her principal doctoral thesis but also her subsequent career. She was enchanted by the early monuments she saw, especially the high crosses at Ahenny. On her return to Paris, she showed her photographs to Focillon, who enthusiastically supported her project on Irish carvings, for which in 1932 she achieved her doctorate. La sculpture irlandaise pendant les douze premiers siècles de l'ère chrétienne, dedicated to Focillon, appeared in 1933. It was immediately recognised to be of primary importance and a fundamental source of reference. Federation of University Women scholarships funded her years of study and travel. In Ireland expeditions were often by bicycle, but research further afield took her to Scotland and Scandinavia, setting a life pattern of journeys both scholarly and practical. It was fortunate timing: much traditional rural life still survived, while a Celtic studies renaissance was emerging. In Dublin she lived at Trinity Hall, where the warden, Mairead (Elizabeth Margaret) Cunningham (1872–1940), a pioneer for women graduates, was strongly supportive. During a long stay on the Aran islands it is reported that she spoke only Irish or French, affecting to know no English.

‘La chapelle de Cormac, à Cashel’ was her first article on Irish art (1928). Her appointment to a post in the French department of UCD in 1932 enabled her to continue further, and in 1940 appeared a major work: Irish art in the early Christian period, to match Kendrick's Anglo-Saxon art in a series planned by Methuen. In many ways this book was her highest achievement in breaking new ground, untilled since Margaret McNair Stokes (qv) in the nineteenth century. It traced the growth of Irish art from the prehistoric Celts up to the twelfth century, encompassing metalwork, sculpture and manuscripts in a vivid, clear prose style. It was expanded and updated for portion of a three-volume set on Irish art in the 1960s, first published in French and then in English, with magnificent Belzeaux-Zodiaque plates. She had seriously considered being an artist in her youth and always used her own drawings for line illustrations.

Alongside her research another career unfolded: teaching art history. In 1934 Sarah Purser (qv) created and jointly endowed the Purser–Griffith scholarships in the history of European painting, in order to encourage the study and appreciation of art. To further this, UCD appointed Françoise Henry to give a course on the subject, which for many years provided a unique opportunity in Ireland for the interested public. These free lectures were a brilliant experience for countless students, and had far-reaching influences, especially when a number went on to staff galleries and colleges. In 1948 she was transferred from the French department to the department of archaeology, and later became director of studies in archaeology and the history of European painting. From the nucleus of the Purser–Griffith lectures she established in 1965/6 an honours degree subject within a separate department of the history of European painting (subsequently the history of art). It had immediate success, soon attracting postgraduate research and higher degrees.

Her friends Cecil Curle and Geneviève Marsh-Micheli (a relative) collaborated with her in their researches in the 1930s and later. In UCD she had contact with scholars such as Eoin MacNeill (qv), R. A. S. Macalister (qv), and Gerard Murphy (qv), and in archaeology she was a colleague of two professors, Seán P. Ó Ríordáin (qv) and then Ruaidhrí de Valera (qv). Maírín Ó Dálaigh (qv), Mairín Allen, Anne (Neans) and William O'Sullivan (1921–2000), and Frank O'Connor (qv) were particular friends who reinforced her interests. There was a sad break-up with the last-named, owing to the marriage bar in force at the time. His proposal was refused as she would have lost her job on marriage and this would have affected her mother's situation.

During the disruption of the second world war, she rallied to the cause of France with unsparing energy and courage. At the beginning she played a major part in the evacuation of French museum collections, and later, in London, was secretary of the commission for the preservation of works of art in occupied Europe; but she also worked in a war factory in England and in 1944 enrolled in France as a medical corps ambulance driver. She was decorated with the Légion d'honneur in 1947 for her war service. It was the family tradition: her uncle, Gen. Clément-Grandcourt (1873–1948), though retired after a distinguished military career, enlisted as a private in 1940 and served in Norway.

Back in Ireland she engaged in field work again from 1946, continuing her investigations on early monastic sites, island retreats off the west coast, and hermitages, recording monuments and in some cases excavating, as at Inishkea North, Co. Mayo, and Templenaskellig, Glendalough, Co. Wicklow. It was often pioneering work. In the department of archaeology she built up a photographic archive to document early Irish Christian art, using wide-ranging comparative material as well. Her research was methodically published over the years, but two small books, Early Christian Irish art (1954) and Irish high crosses (1964), written for the cultural relations committee of Ireland, engaged a much wider public. Her significant legacy to the history of Irish illumination is embodied in her final study of the Book of Kells (1974), which became her most acclaimed work. She had extended the field of manuscript research from an early Bobbio group, previously little studied, to a concluding, but completely fresh, substantial examination of post-Norman illumination up to the sixteenth century.

A special issue of Studies appeared in her honour after she retired from teaching in 1974. Her contribution to scholarship had two quite separate sides. The first, testified by her published works, had the same clear-cut aim as Margaret Stokes: ‘to elucidate the growth of Celtic art’. On the other hand, she founded the study of art history in Ireland, introducing the continental tradition rather than that of the English-speaking world. She had major involvement in contemporary arts, e.g. in the organisation of the Mainie Jellett (qv) retrospective exhibition in 1962, and also acted widely in an advisory capacity, on the council of the friends of the national collections, and on the board of guardians of the NGI from 1962. There can have been few areas connected with art that she did not touch. Artists among her friends included Mainie Jellett, Evie Hone (qv), Margaret Mary Stokes, Lillias Mitchell, Domhnall Ó Murchadha (d. 1991), and the Polish sculptor Lech Wardecki in France. Her mother had moved in 1919 to Chassagne in the Morvan, but after the war, because the house had been occupied, she moved again to a lovely old farmhouse near Auxerre, called Les Bretons. The close relationship with her mother, a strict protestant with a dominating personality, had limitations despite their devotion. She postponed her reception into the catholic church, which she had grown to love, until after her mother died, rather than give her pain. Les Bretons became her home, where over many years she warmly welcomed numerous Irish friends and students and gave them a wonderful introduction to Vézelay and other treasures in the area. She continued to share her life between Ireland and France, though arthritis made travel difficult towards the end. She died at Auxerre on 10 February 1982. The finest early art discovery of the century came in 1980 at Derrynaflan, in time for her to describe it in print; the find place resonated with her, going back to her arrival in Tipperary, to the home nearby, fifty-four years before.

She was elected MRIA (1949) – one of the first four women to be a member – and FSA (1951), and received honorary doctorates from Dublin University (1963) and NUI. ‘Self portrait at nineteen’ in conté, and a portrait in pencil c.1977 by Muriel Brandt (qv) are in private hands, while a head carved in a block of Cashel sandstone by Domhnall Ó Murchadha (1982) is in the National College of Art. Her papers are deposited in the RIA, UCD Archives, and private hands.