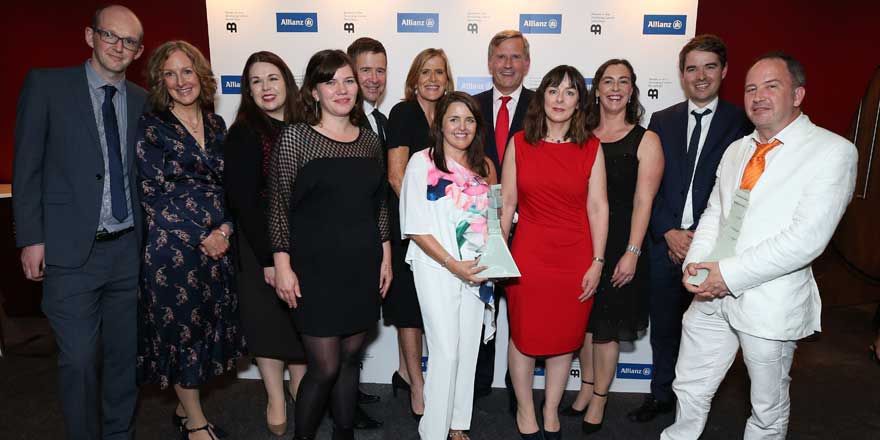 The Royal Irish Academy in partnership with Accenture won the Allianz Business to Arts Award 2017 for Best Large Sponsorship (over €50,000) for Women on Walls.

The award ceremony was held at the Bord Gáis Energy Theatre on Monday 4 September 2017.

The Women on Walls campaign aimed to make women leaders more visible and to inspire the next generation of women especially in the area of STEM.  Paintings were commissioned through an open competition in March 2016, which called out to Irish artists and artists based in Ireland for at least three years. Out of the 55 entries received two artists were commissioned.

Vera Klute was commissioned to portray the first female Members of the Royal Irish Academy:

One of the most important twentieth-century historians of Irish art

A ground-breaking researcher in Irish classical literature; Sheila Tinney (1918–2010), a pioneer in the field of mathematical physics.

A pioneering academic in mathematical physics, Sheila Tinney was described by Nobel Laureate Erwin Schrödinger as ‘among the best equipped and most successful of the younger generation of physicists in this country’.

Blaise Smith was commissioned to portray a group of eight contemporary female scientists all of whom are recipients of the European Research Council Starter Grants 2012.

Accenture also won the B2A Judges’ Special Recognition Award for Portfolio of Investment that included the Women on Walls documentary made by El Zerrero Films, which was aired on RTE Television on 9 March 2017.