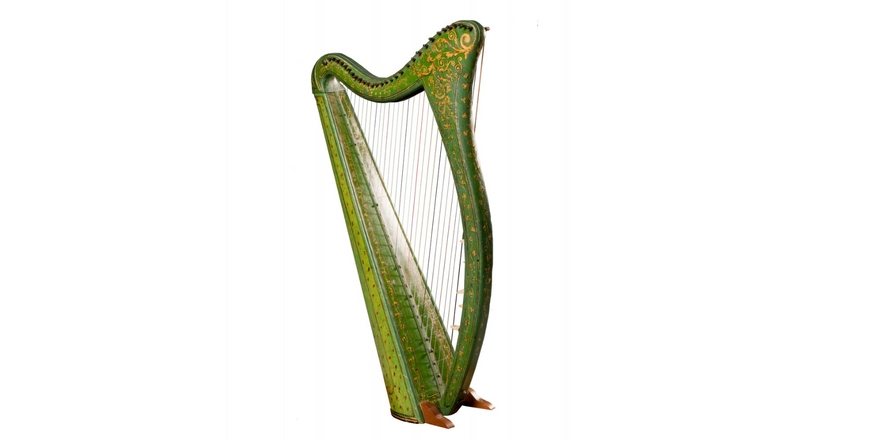 The first ever National Harp Day will take place in November, 2017 at key centres across the country. To mark this occasion, Mary Louise & Teresa O’Donnell will present a talk on the harp maker John Egan of Dawson Street, inventor of the Portable Irish Harp and on his son, Charles, composer, teacher and performer. The Academy’s distinctive Egan harp, formerly owned by Thomas Moore of the eponymous Melodies will be on display. The lecture will be interspersed with performances of compositions for harp and voice by Charles Egan and by Moore.

In August 1821, John Egan, a harp maker operating his business from 30 Dawson Street, Dublin, was appointed Pedal and Portable harp maker to King George IV. This prestigious appointment was an acknowledgement of Egan's innovation and invention in the design and production of harps over a period of two decades. Egan’s success and patronage by members of the British royal family provided a crucial entrée into the upper echelons of British and Irish society for his son Charles, who was a composer, arranger, teacher and performer. Charles was appointed professor of harp to Princess Augusta in 1822 and performed regularly for members of the royal family. This talk by Mary Louise and Teresa O'Donnell, which will be interspersed with performances of works by Charles Egan, will provide a fascinating account of the Egan family and their transformation of the harp tradition in Ireland in the early nineteenth century.

Mary Louise O'Donnell holds a doctorate from the University of Limerick and is a former Irish Research Council postgraduate scholar and postdoctoral fellow. Her first book Ireland's Harp: the Shaping of Irish Identity c.1770 to 1880 was published by UCD Press in 2014.

For the past twenty years, Teresa O’Donnell has worked as a freelance pedal and Irish harpist throughout Ireland, Europe and North America. A diverse musician, she has performed with the Irish Chamber Orchestra and has appeared on stage with Andrea Bocelli, Sinead O' Connor, The Chieftains, The Celtic Tenors, Tommy Fleming and Katherine Jenkins.