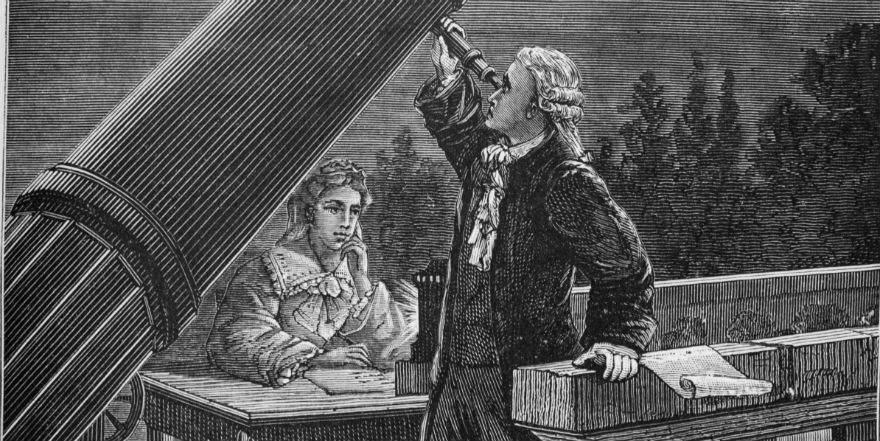 First in our Blog post series on five Honorary Members featured in our exhibition 'Prodigies of learning: Academy women in the nineteenth century.' This month we look at Caroline Herschel.

Caroline Herschel was the first professional female astronomer; she discovered eight comets, over a dozen nebulae, was the first woman to be awarded a Gold Medal by the Royal Astronomical Society and a Gold Medal for Science from the King of Prussia. She has a comet and a moon crater named after her. Yet, her early life was on a very different trajectory.

Herschel was born into a working class musical family in Hanover in 1750. Whilst her father, Isaac, was keen to educate all his children, her mother, Anna, believed her daughter’s place was in the home. She was expected to be the family’s housemaid, taking care of all the domestic chores. Isaac, to the chagrin of his wife, gave Caroline music lessons and encouraged her to improve herself with a little education.

In 1772, Caroline’s older brother William, by now a musician in Bath, persuaded their mother to allow his sister to join him and train as a singer in England. She took singing and dancing lessons while her brother taught her English. Caroline was clearly talented and went on to perform as a star soprano in Bath and Bristol up to five nights a week. Despite this success and her busy schedule, she continued to look after the household chores.

Caroline’s singing career was cut short when William’s attention turned to the study of astronomy. William had been interested in astronomy since he was a young man, now this interest was turning into an obsession and he expected his sister to follow suit. Her career changed course from star of the music scene to star gazer. In the Spring of 1772 he bought a copy of James Ferguson’s Astronomy and started buying the components needed to build a telescope. For years William and Caroline busied themselves with the construction of telescopes, hours were spent polishing mirrors. 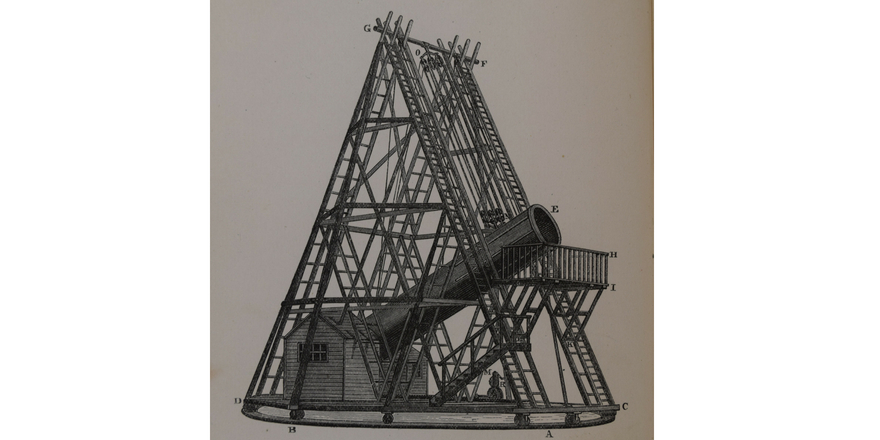 William taught Caroline mathematics and science. Even in the dead of winter, when the ‘very ink was frozen in the bottle,’[i] she was at William’s side taking observational notes as he worked at the telescope. With her help, William discovered the planet Uranus in 1781, a discovery that led to him becoming court astronomer to King George III. As his assistant, Caroline benefited from a royal pension, £50 per year, allowing her financial independence and making her the first professional female astronomer. The siblings were now truly professional astronomers and moved to Datchet, near Windsor Castle, in August 1782, close to the royal family. 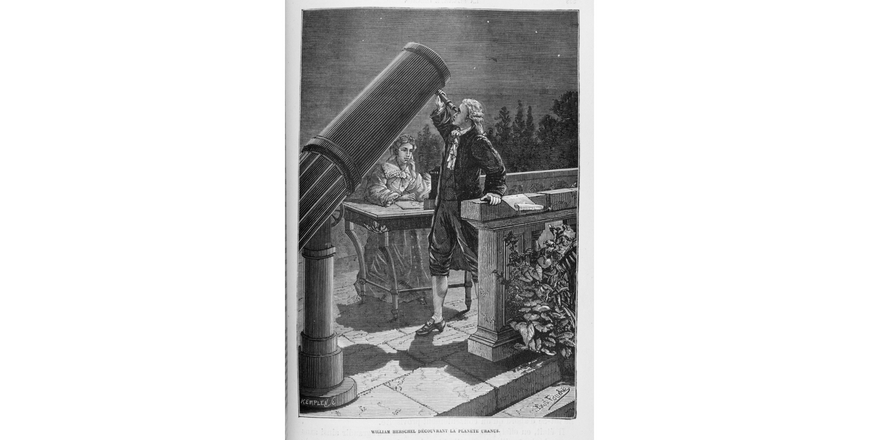 By the following year William had built a telescope for Caroline especially designed to discover comets. With her own telescope, Caroline made independent searches of the skies and became well respected in astronomy. As well as her many discoveries of comets, nebulae and clusters, Caroline updated John Flamsteed’s vast Catalogue of stars, adding 560 stars not previously catalogued.

“I found I was to be trained for an assistant-astronomer, and by way of encouragement a telescope adapted for “sweeping,” consisting of a tube with two glasses, such as are commonly used in a “finder,” was given me. I was “to sweep for comets,” and I see by my journal that I began August 22nd, 1782, to write down and describe all remarkable appearances I saw in my “sweeps,” which were horizontal. But it was not till the last two months of the same year that I felt the least encouragement to spend the star-light nights on a grass-plot covered with dew or hoar frost, without a human being near enough to be within call.” [ii] 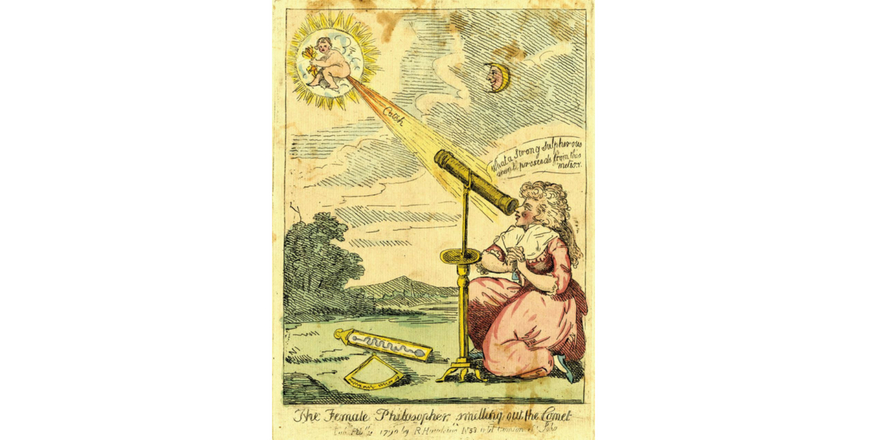 William died in August 1822 and Caroline returned to Hanover. Back in Germany Caroline no longer searched the skies but continued to contribute extensively to the field of astronomy. Her nephew, John, followed in his father’s footsteps and Caroline dedicated much of her time to assisting him in his astronomical work. In 1828 Caroline was awarded the Gold medal of the Astronomical Society for her work on the revision and re-arranging of William’s Catalogue of Nebulae and Clusters of Stars. She was eventually made an Honorary Member of the Royal Astronomical Society in 1835. In 1838, she was made an Honorary Member of the Royal Irish Academy. Her nephew, John, informed her of the honour and the modesty of her reply rings out.

Hanover, Dec. 17, 1838.
My dear Nephew,—
First and foremost let me dispatch what may be called business. In the first place, I thank you for your kind letter and communication of having so great an honour conferred on me as to be admitted an honorary member of the Royal Irish Academy. I cannot help crying out aloud to myself, every now and then, What is THAT for? …[iii]

Caroline Lucretia Herschel died in Hanover in 1848, aged ninety-seven and was buried with a lock of her brother’s hair in her coffin. 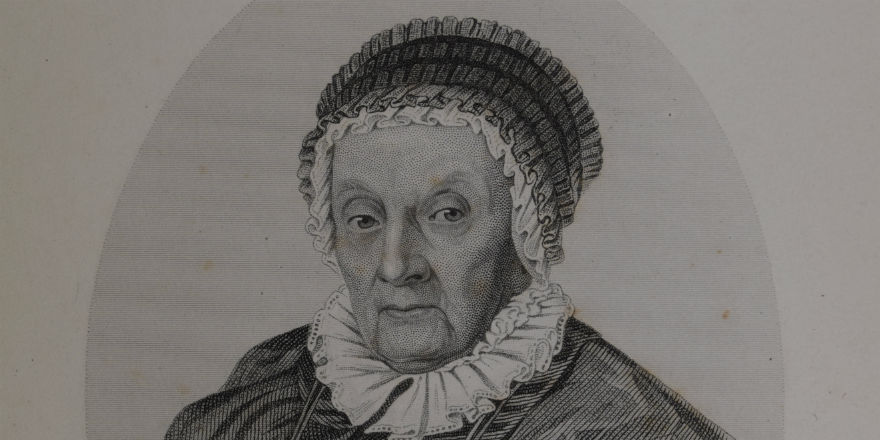 Caroline Herschel was one of the women featured in our exhibition ‘Prodigies of learning: Academy women in the nineteenth century’

[i] Memoir and correspondence of Caroline Herschel by Mrs. John Herschel (London, 1879), p.vi