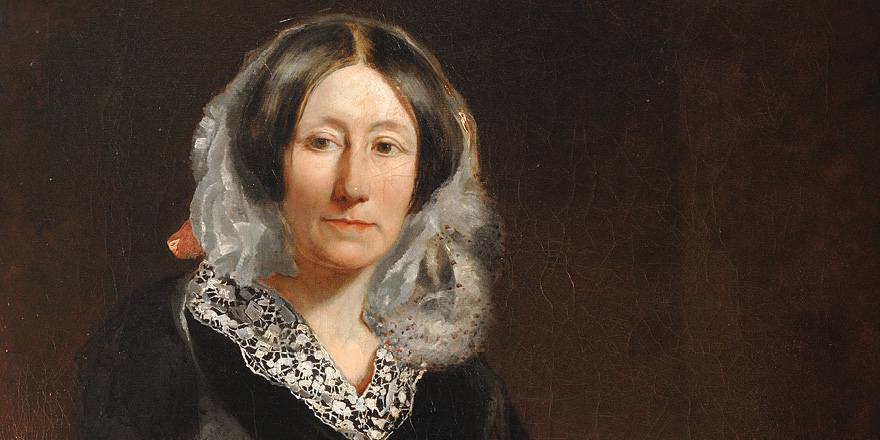 Fifth and final blog post in our series on the five Honorary Members featured in our exhibition 'Prodigies of learning: Academy women in the nineteenth century'.

Mary Somerville (1780-1872) was a talented science writer and polymath with an extraordinary, mostly self-taught, knowledge of mathematics. In an era when most women lacked access to formal education, she influenced the way we think about science and created a space for herself in the intellectual world of the nineteenth century.

She was born on 26 December 1780 in Jedburgh, Scotland, the fifth of seven children of Captain, later Vice-Admiral, Sir William George Fairfax and his second wife Margaret Charters. Her childhood was spent in Burntisland, a seaport town across the Firth of Forth from Edinburgh where she was allowed to run wild for the first ten years of her life. 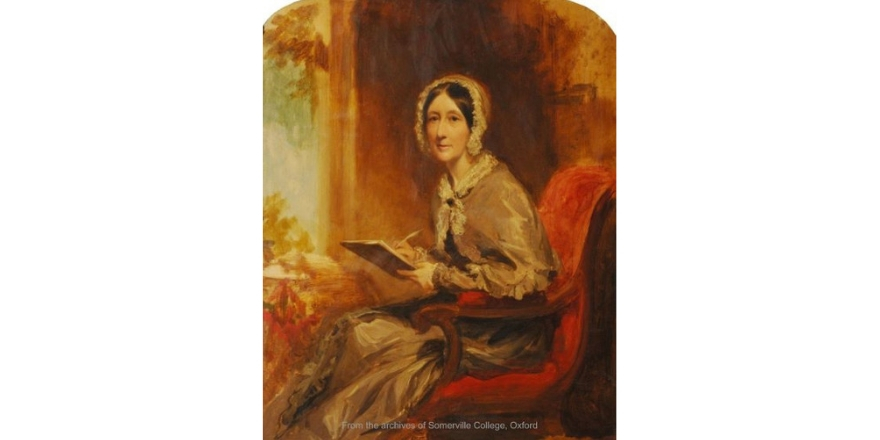 Self-portrait of Mary Somerville, c.1820. A skilled painter who once studied with artist Alexander Nasmyth, she portrays herself seated with quill and paper in hand.

Returning from one of his long sea voyages her father, disappointed to find her unable to write and barely able to read, sent her to Miss Primrose’s Boarding School for Girls in Musselburgh, which she hated. Although she recalled emerging from her time there ‘like a wild animal escaped out of a cage’, she had improved her reading and learned some simple arithmetic, grammar and French. The twelve months she endured there was the only formal education of her very long life.

In the ensuing years, she was tutored in dancing, piano, drawing and painting, needlework and the use of globes. Not quite the education for a future mathematician but accomplishments deemed suitable for a gentleman’s daughter and desirable skills for a future wife. Less conventionally and quite by accident she also began a life-long study of algebra, following a chance glimpse of an equation in the puzzle section of a ladies’ monthly fashion magazine. She acquired Euclid’s Elements and Bonnycastle’s Algebra on overhearing her painting teacher Alexander Nasmyth mention that Euclid’s theories, which explained perspective in painting, also formed the basis for understanding astronomy and mechanical sciences. She studied these independently and in secret, her father having forbidden her to read mathematics fearing such behaviour could injure the tender female frame. This and other outspoken criticism of ‘unwomanly behaviour’ only sharpened her resolve to learn the subject. She believed in the right of women to fufiI their true potential and in her Memoirs she voiced her frustration: “I was annoyed that my turn for reading was so much disapproved of, and thought it unjust that women should have been given a desire for knowledge if it were wrong to acquire it.”

At the same time, in other ways she lived the traditional role of the daughter of a well-connected family, attending social events and as a shy, petite, beautiful young woman, with an apparent sweet and polite manner she was dubbed the ‘Rose of Jedburgh’ among Edinburgh society.

In 1804, she married Captain Samuel Greig, who became the Russian Vice-Consul in London. Her husband did not support her studies: ‘He had a very low opinion of the capacity of my sex, and had neither knowledge of, nor interest in, science of any kind.’ When Greig died three years later in 1807, she returned to Scotland with her two young sons. Being a widow gave her a level of financial and social independence; she was now able to study more openly, although her family still considered these efforts both eccentric and foolish.

She studied mathematics and physical astronomy, including Newton's Principia and got to know Edinburgh’s leading intellectuals including Dr William Wallace, later professor of mathematics at Edinburgh University. She made a name for herself when solving a problem in The Mathematical Repository, a periodical aimed towards popular mathematical interests, for which she was awarded a silver medal.

In 1812, she married another cousin, Dr William Somerville (1771-1860), inspector of the Army Medical Board and had four more children. He supported and encouraged her academic pursuits and helped Mary develop her interests in the physical sciences, opening doors that allowed her to make the acquaintance of many of the most eminent men of science and thinkers of the day first in Edinburgh, then in London.

‘The magnetic properties of the violet rays of the solar spectrum’, a report of her observations on the magnetising power of sunlight) was the first paper by a woman to be read to the Royal Society and published in its Philosophical Transactions (1826). Although her conclusions were later proved to be incorrect, this article is of great importance being the first experimental paper by a woman to be published in the Society’s journal under her own name. However, since women were barred from entering the Society’s premises, it was read by her husband on her behalf. It was this publication that helped to establish her reputation as a serious scientist. Interestingly in Mike Leigh’s 2014 film Mr Turner, Somerville is seen discussing this experiment with the painter J.M.W. Turner aptly reflecting the intertwining worlds of nineteenth-century art and science.

Mary Somerville’s real contribution to nineteenth-century science was in her powers of analysis rather than original research. She explained complex scientific ideas clearly and made them accessible to a wider audience. She is best known as the author of four books, beginning with Mechanism of the heavens (1831), in which she translated Pierre-Simon Laplace’s Traité de mécanique celeste into English, and as she put it ‘from algebra into common language’. This was achieved by adding her own commentaries and introducing numerous geometrical diagrams. Even so, Somerville’s work still demanded an extremely high level of mathematical competency from its readers: On the Connexion of the Physical Sciences (1834) the 6th edition of which encouraged John Couch Adams to look for and discover the planet Neptune; Physical Geography (1848), which was commonly used as a textbook until the early 20th century; and Molecular and Microscopic Science (1869) which was a summary of the most recent discoveries in chemistry and physics. 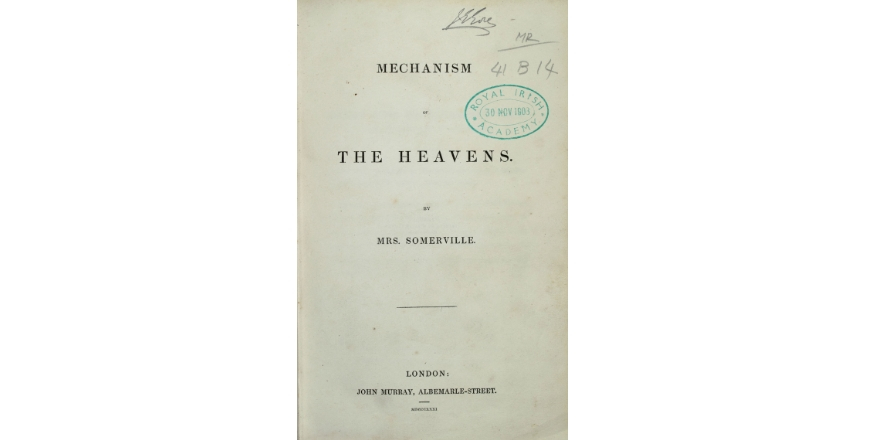 Mary Somerville, Mechanism of the Heavens (London: John Murray, 1831)
This book, an English translation and condensed version of the five- volume Traité de mécanique céleste, written by the French astronomer Pierre-Simon Laplace between 1798 and 1825, established Mary Somerville as one of the outstanding figures in early nineteenth-century science.

During her life Mary Somerville received many honorary memberships and titles from distinguished scientific organisations. In 1834, Somerville was made an Honorary Member of the Royal Irish Academy and the Society of Physics and Natural History of Geneva.  A year later she was voted into the Royal Astronomical Society and was awarded a civil pension of £300 per year. Eleven Italian scientific societies honoured her between 1840 and 1857 and by 1870 she had also been inducted into the American Philosophical Society and the American Geographical and Statistical Society.

She also used her fame to advocate for women’s rights. In 1868, hers was the first signature on John Mills’ suffrage petition. Her reputation was such that there is an island, a lunar crater, an asteroid, and an Oxford College named after her and she features on the Royal Bank of Scotland £10 banknote issued in 2017.

Somerville engaged in the most advanced study of mathematics, physics and astronomy right up until her death in Naples on 29 November 1872, less than a month before her ninety-second birthday. ‘Whatever difficulty we might experience in the middle of the nineteenth century in choosing a king of science, there could be no question whatever as to the queen of science’,The Morning Post obituarist declared on 2 December 1872. 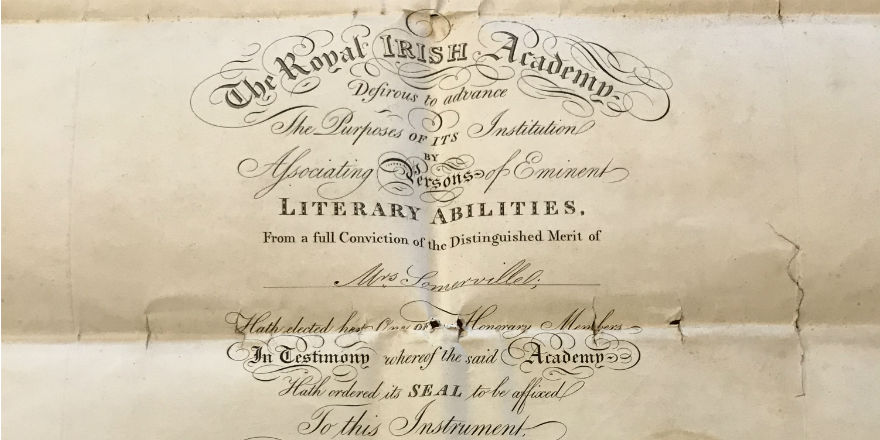 In many respects Mary Somerville adhered to the rules of a society lady in the nineteenth century, marrying, successfully managing a household and raising children but she defied convention by forging a stellar scientific career in a man’s world. She remains an important role model in science and mathematics, providing particular inspiration to women pursuing scientific education.

Mary Somerville was one of five Honorary Members of the Royal Irish Academy who featured in the exhibition ‘Prodigies of Learning: Academy Women in the Nineteenth Century’