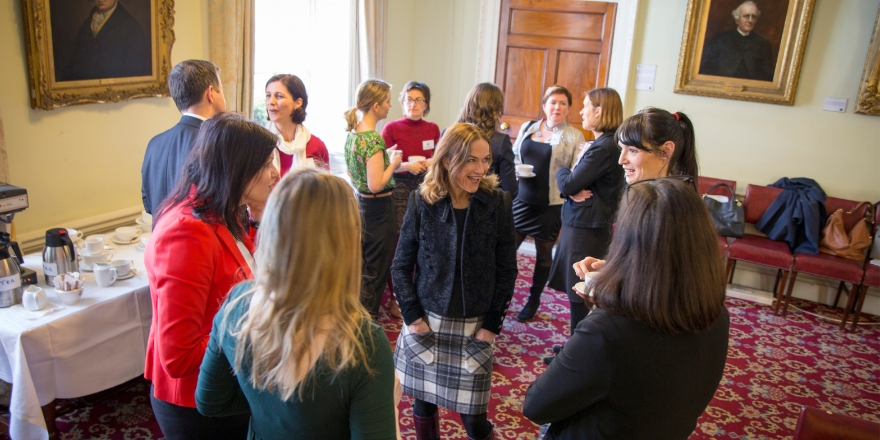 Dr Rhona Mahony delivered the second in our 2019 Women in Leadership Masterclass series, inspiring the next generation of female leaders

During her time as Master at the National Maternity Hospital, Rhona faced many difficult situations herself, such as legal challenges, unwanted media exposure. dealing with cabals, the politics of women’s health and the historic lack of investment into the area. In the course of the masterclass dialogue many areas and leadership challenges were touched on including hierarchies, keeping true to yourself, the importance of mentorship for development, decision making, loneliness in leadership, dealing with conflict and underperformance and the importance of sticking to your plan.  Rhona acknowledged that there are advantages to being a woman in leadership and also that mentors are important, so advised being one to others and nurturing their potential and talent.

Dr Mahony is currently Executive Director of the Women and Children’s Clinical Academic Directorate within Ireland East Healthcare Group. She previously served as Master of the National Maternity Hospital (NMH) in Dublin from 2012 to 2018.  NMH is one of Europe’s largest maternity hospitals, caring for 10,000 pregnant women annually and is a major Irish Tertiary Referral Centre providing advanced obstetric, neonatal and gynaecological care.  Dr Mahony is an Obstetrician & Gynaecologist, a Specialist in Maternal and Fetal medicine and an Honorary Clinical Professor with RCSI.  Dr Mahony is a Fellow of the RCOG UK, and of the RCPI in Ireland. In 2018, she was awarded an honorary fellowship of the UCD Medical School and also a UCD Alumna award. In 2016 she was awarded an honorary Fellowship of the American College of O&G and an honorary Doctorate of Medicine from NUI for her contribution to women and infants health.  In 2014 Dr Mahony became an Eisenhower Fellow spending time in the USA as part of a Multi-Nation leadership Programme. In 2013, Dr Mahony founded the National Maternity Foundation, which supports the work of NMH. Dr Mahony is a member of the Institute of Directors of Ireland and serves on the board of the Little Museum of Dublin. She lives in Dublin with her husband and four children.