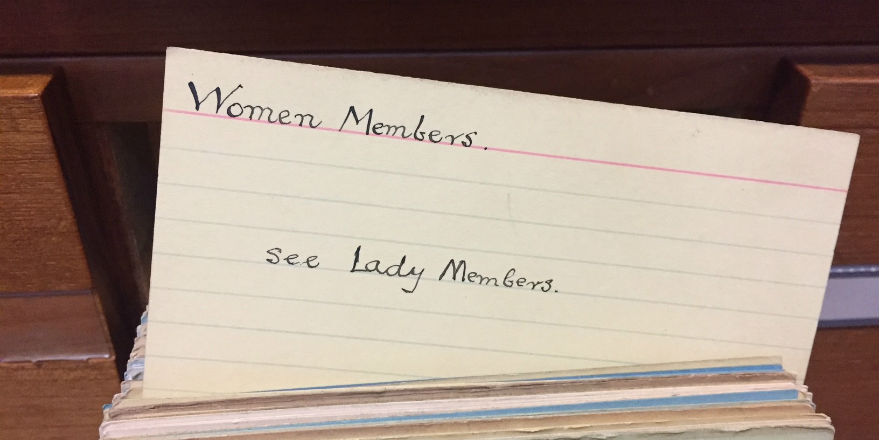 In this month's Library Blog post, Turlough O'Riordan of the Dictionary of Irish Biography, looks at the issues surrounding the election of women to the Royal Irish Academy in the nineteenth and twentieth centuries.

Margaret McNair Stokes (1832–1900) was elected an ‘honorary’ member of the RIA in 1879. The first female honorary member was Princess Dashkova, elected in 1791. Margaret, daughter of the eminent physician William Stokes MRIA (1804–1878) and sister of Whitley Stokes MRIA (1830–1909), lawyer and celtic scholar, read her first paper to the RIA stated meeting on 30 November 1899. William’s ‘open house’ at his residence, 5 Merrion Square, Dublin, brought together leading figures from science, education, law and music.

William Stokes was friendly with Samuel Ferguson MRIA, George Petrie MRIA, Edwin Quin MRIA (3rd earl of Dunraven), and James Henthorn Todd MRIA, all leading figures in the early celtic revival of the late nineteenth century, and together prominent in the affairs of the RIA. Margaret Stokes, primarily an archaeologist and artist was the most important woman antiquary of her day and a prominent figure in the early Irish celtic revival. She edited Dunraven’s Notes on Irish architecture (1875–78) and Petrie’s Christian inscriptions in the Irish language (1872). Margaret knew Thomas Westropp MRIA and Robert Macalister MRIA, amongst others, leading figures in antiquarianism and the governance of the RIA. 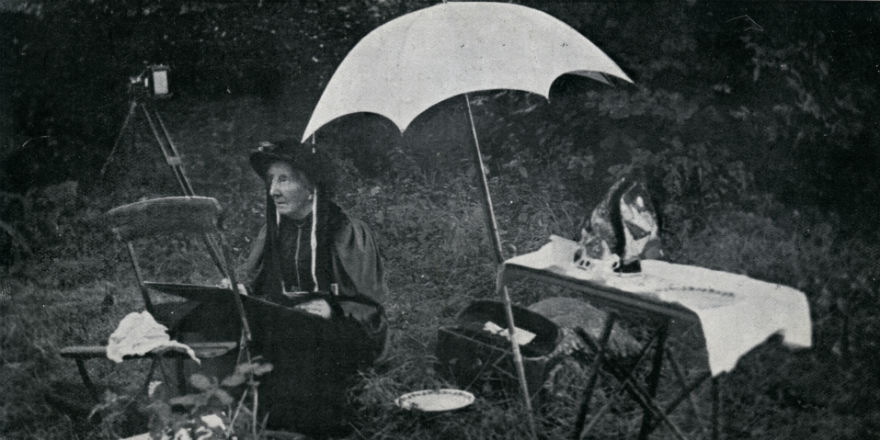 Clare O’Halloran, in a fascinating 2018 lunch time RIA library talk has noted, despite the Irish Queen’s Colleges beginning to admit women students from the early 1880s, there was a clear pattern of the UK learned societies excluding married women, likely emanating from the common law doctrine of coverture. The 1918 Representation of the People Act enfranchised women over 30 who owned property, or whose husband owned property, in time for the December 1918 general election. The 1919 Sex Disqualification (Removal) Act made it illegal to exclude women from membership of incorporated societies – such as academic, learned or professional bodies like the RIA. The act allowed women to practice law, join incorporated professional societies, and study for degrees at universities. Thirty years later the RIA elected its first four female ‘ordinary’ members! Why so long? 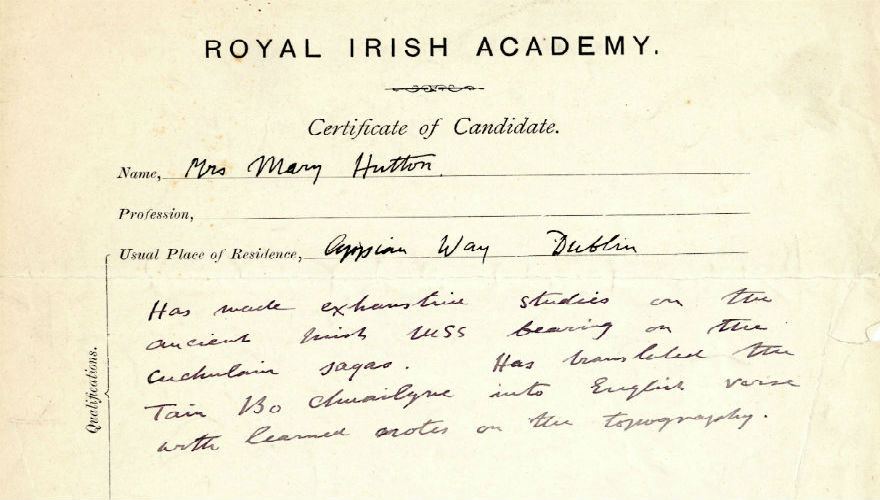 Born of supportive and open-minded liberal Unitarian parents, Mary Ann Hutton had been a pioneering woman student at the University of London, becoming an accomplished Irish-language scholar, acquaintance of Patrick Pearse and a supporter of Conradh na Gaeilge. Intriguingly, in 1908, Hutton had given the ‘Margaret Stokes memorial lectures’ at Alexandra College, Dublin. As Dr Linde Lunney notes in the Dictionary of Irish Biograhy, Hutton’s ‘main contribution to Irish scholarship was The Táin: an Irish epic told in English verse (1907), an edition of the Táin Bó Cuailnge legend with scholarly appendices of lexical terms and names. It was not a literal translation but rather a re-working in blank verse of material from various sources, and took ten years' work. Well received, it was re-published in 1924 with illustrations in Celtic revival’. 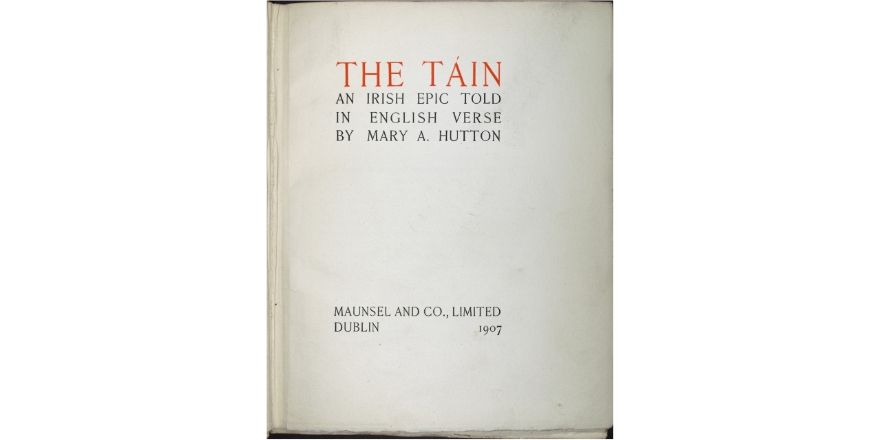 The Táin: an Irish epic told in English verse by Mary A. Hutton (Dublin, 1907)

The RIA Council considered the nomination, in February 1910, and sought legal advice from the Academy’s solicitor W. M. Jellett. He advised, in September, that women’s membership was incompatible with the RIA charter, suggesting a supplementary charter would be necessary to admit women members. The 1919 Sex Discrimination (Removal) Act, though valid in the Irish Free State, in this instance had little impact. In 1930 the RIA again consulted Jellett, who opined the following year that women ‘may become members … but cannot be elected’ to hold office in the RIA.

William Morgan Jellett (1857–1936), the eldest son of J. H. Jellett (1817–88), Provost of TCD and President of the RIA (1869–74), was a leading lawyer, MP for TCD (1919–22), a prominent figure in Unionism, and former private secretary to Lord Ashbourne. His father had been the only member of the TCD board to support the admission of women students. Refusing Lloyd George’s offer of the attorney generalship for Ireland and then declining a seat on the judicial bench offered to him by the new Cumann na Gaedheal government, Jellett reconciling himself to the new Free State, participating in many important legal cases through the 1920–30s, dying as ‘father’ of the Irish bar[2]. Jellett must have been aware of the impact and relevance of the 1919 Sex Discrimination (Removal) Act to some of his own close female relatives. His sister Eva Jospehine Jellett (1897–1944) was Trinity College’s first woman medical graduate (MB, 1905). Another sister, Dorothea (‘Bea’) Jellett, was a prominent violinist and conductor of the Gaiety Theatre Orchestra. In 1895 William Jellett had married Janet McKenzie Stokes (1868–1946), daughter of the lawyer Henry Stokes (1842–1920). Amongst their children was the noted painter Mainie Jellett (1897–1944), a leading artistic figure of her generation. One of Janet’s paternal aunts was Margaret McNair Stokes. Thus the question of female membership of the RIA was of more than professional interest to William Jellett.[3]

Eventually in 1949 the RIA elected four women ordinary members. Mathematical physicist Sheila Christina Tinney (1918–2010), art historian Françoise Henry (1902–82), scientist and botanist Phyllis Clinch (1901–84) and the Irish language scholar Eleanor Knott (1886–1975) were the first four women members elected to the RIA. All four featuring in the DIB, their election has been retrospectively marked by their portraits being hung in Academy House in 2016.

[3] The multiple interlinkages between the Jellett, Stokes and Purser families are presented by one of the their descendants Michael Purser in his book Jellett, O’Brien, Purser and Stokes: seven generations and four families (2004).