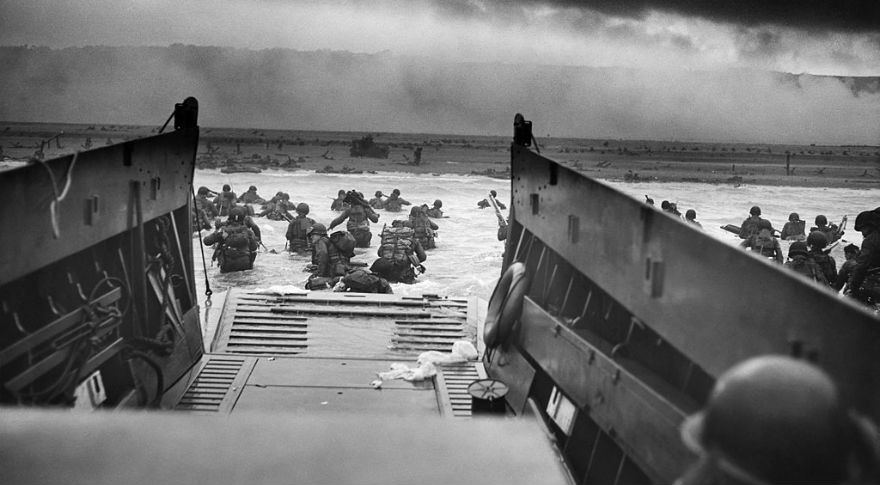 To mark the seventy-fifth anniversary of D-Day the DIB is publishing its entry on Columbanus Deegan, one of the many Irish men and women who took part in the intense final push in 1944 in France.

Columbanus Deegan (1925–2007), war veteran and Franciscan friar, was born John Joseph Deegan on 4 April 1925 at 23 Usher's Island on Dublin's south quays, one of three boys of James Deegan, a labourer, and his wife Annie Deegan (formerly Finnegan; née Quinn). Known in his youth as Sean, he attended North Brunswick Street Christian Brothers' School, and afterwards worked as a telegraph boy in the GPO. Keen to become a soldier, he applied to join the Irish army but was rejected for being too thin, and so, aged just 17, he went to Belfast and joined the British forces in 1942. The Deegan family, like many in Ireland, had divided loyalties. One of his father's brothers had been a soldier in the British army in the first world war and had been killed, and his mother's relatives were republicans, so neither parent was happy about his departure.

The youngster's wish for danger and excitement was speedily granted; he joined the Royal Air Force, and worked in communications and navigation. He was then trained as a member of a specialist unit to be posted to France to find crashed aircraft and salvage any usable weapons or aircraft parts. Deegan was issued with a powerful Harley–Davidson motorbike, and dispatched to await passage to Europe. It transpired that his unit was to be part of the Normandy landings on D-Day, 6 June 1944. They were in the second wave, and as they approached Sword beach Deegan realised that there were already many casualties piled up on the sand and in the fields inland. The unit came under heavy fire, and lost many men. Deegan was unhurt, and set off the next day on his motorbike, criss-crossing the countryside in the wake of the Allied armies on their advance through Europe, experiencing daily dangers and privations, and often seeing comrades killed.

When the war ended, he was taken to see the survivors in the liberated concentration camp at Belsen, and realised, perhaps for the first time, that the war in which he had been engaged was not just an exciting adventure but had in fact been a campaign against evil. Nonetheless, his experiences, and this realisation, were hard to reconcile with what awaited him back in Dublin in 1948, where at best there was no understanding of what the war had been like, and at worst he and the thousands of others who had fought for Britain were vilified as traitors to Ireland. Perhaps not surprisingly, many former soldiers, including Deegan, had serious problems settling back into civilian life, and most never talked about their war years. Deegan tried a few jobs, including teaching English and history, but in 1958, feeling he somehow had to make sense of his experiences, he entered the religious life to become a Franciscan friar.

He was professed in 1959, taking the name Columbanus, and spent some time in Rome. In November 1960 he experienced further tragedy when his mother was killed by a car when she was crossing the street beside her home on her way to attend confession in the Adam and Eve Franciscan church. When Deegan was posted back to Ireland, he was based in the Franciscan friary, Lady Lane, Waterford. He became a well-known figure there, chaplain to workers in Waterford industrial estate, and also deeply involved with charities and work for the under-privileged. He was one of the first community workers to anticipate and to try to prepare for the devastating consequences of the drugs epidemic in poorer areas, and visited New York and California in search of usable strategies. He worked along with Breadline, a charity ministering to the homeless, and was also involved with the Special Olympics from their inception.

Deegan came to wider prominence from around the time of the fortieth anniversary of the D-Day landings, when the media coverage of the reunions and events associated with commemoration contributed to a growing realisation in the country as a whole that the suffering and losses of so many Irish families, and the sacrifices of so many Irish men and women, had not been adequately acknowledged. In 1984, for the first time, Deegan went back to Sword beach, wearing his campaign medals pinned to his friar's habit; he was interviewed by journalists a number of times then and in later years about his war experiences. He took all his opportunities to be a spokesman for the lost comrades, as well as for those still suffering after the end of various wars. As a long-time honorary secretary of the Royal British Legion in south-east Ireland, he spoke out in support of Irish people who were prepared to risk wearing a poppy on Remembrance Day.

His experiences and his religious beliefs had made him a pacifist, and he took part in anti-war marches in Dublin in the 1990s, but it was his testimony, as a catholic from Dublin's inner city, about his own experiences and on behalf of others who could no longer speak for themselves, which was most influential, contributing to a major shift at the end of the twentieth century in public attitudes towards ex-servicemen in Ireland. Deegan died suddenly in the friary in Waterford on 18 July 2007.