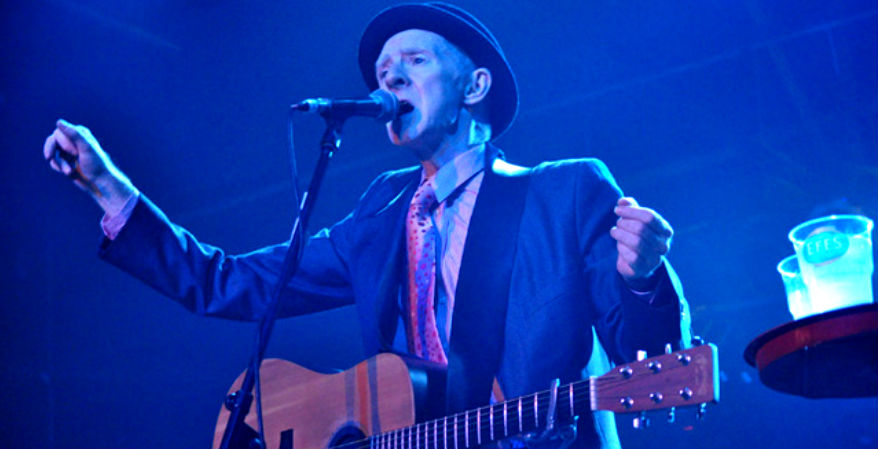 To mark Pride 2019 we are publishing our recent entry on celebrated musician and activist Philip Chevron (1957–2013), writer of the heartfelt 'Under Clery's clock' about his experience as a gay man in 1980s Dublin.

Philip Chevron (1957–2013), musician, songwriter and composer, was born Philip Ryan on 17 June 1957 in the Rotunda hospital, Dublin, the elder of two children of (Philip) Brendan Ryan (1927–97) and Christine Ryan (née LaGrue), both born in inner city Dublin. He grew up in Lorcan Drive, in the north Dublin suburb of Santry, with his sister Deborah. His father, who worked mostly as a catering manager, was also an actor and theatre producer and wrote biographies of the actors Jimmy O'Dea (1990) and Noel Purcell (1992). He took the three-year-old Philip to see O'Dea in pantomime, sparking the boy's lifelong passion for musical theatre.

Educated at the O'Connell CBS, North Richmond Street, Philip disliked its regime of catholic orthodoxy and casual brutality, and frequently skipped classes to cultivate his interests, learning to play guitar and some piano. Aged sixteen, he heard the Berlin-born cabaret singer Agnes Bernelle on the radio and was enthralled. He sought her out and contributed the music to her direction of Aristophanes' 'Lysistrata' which opened on 27 September 1976 in the Dublin theatre festival. The following year, he produced her album Bernelle on Brecht and … (1977) and they worked together on many subsequent projects. He also wrote the music for Jim Sheridan's 'The ha'penny place' (an adaptation of Brecht's 'Threepenny opera' based in Dublin) which played at the Project Arts Theatre in October 1979.

Under the name Philip Chevron (probably taken from the Woolworth's jazz label, Chevron Records), he pursued several musical directions. Having been involved with various short-lived rock bands, in September 1976 he formed the Radiators from Space with singer Steve Rapid, guitarist Pete Holidai, bassist Mark Megaray and drummer Jimmy Crashe. Influenced by the punk movement then emerging in London, they shook up a complacent Dublin music scene and signed a recording contract with Chiswick Records. Their frenetic 'Television screen' (1977) was the first Irish punk single to make the Irish top twenty, and their debut album TV tube heart (1977) received rave reviews; Philip Lynott was an early supporter. However, the fatal stabbing of a fan, Patrick Coultry, at a punk festival in Belfield in June 1977, made them virtually unbookable. After playing support to Thin Lizzy on 21 August 1977 at Dalymount Park, Dublin, they moved to London.

They shortened their name to the Radiators and began to advance beyond the confines of punk, recording the album Ghostown (1979). Produced by Tony Visconti, well-known for his work with David Bowie, it was a significant progression, with ambitious musical arrangements and Chevron's incisive and evocative lyrics, some of which predated the first album. Standout tracks such as 'Kitty Ricketts', 'Song of the faithful departed' and 'They're looting in the town' drew heavily on Irish literature to skewer national and religious pieties and unsparingly portray a Dublin haunted by its past. Chevron later noted that Ghostown owed more to Dublin writers such as James Joyce and Sean O'Casey than to any rock influences. It was mostly well reviewed in Ireland, but less so in Britain, where its literary references baffled most critics. Its musical sophistication was regarded with suspicion by many devotees of punk and sales were disappointing. (Re-issued in 1989, it was widely acclaimed as one of the most accomplished Irish rock albums of all time.) In 1980 the Radiators released the radio-friendly singles 'Stranger than fiction' and 'Dancing years', produced at some expense by Hans Zimmer, but neither made any great impression. After an Irish tour, the band split in March 1981.

Never short of new ideas and plans, Chevron recorded a mini-album of songs from Brecht and Weill's Happy end (1929) entitled Songs from Bill's dancehall (1981). While performing these as a support act for the folk-rock band Moving Hearts, he was booed off stage in Dublin. He noted wryly that the songs had been similarly received in Berlin in 1929.

Living in London, he worked at the Rock On record shop in Camden Town (a job he loved, since it allowed him to immerse himself in music), and got to know regular customers such as Elvis Costello and the Pogue's manager Frank Murray (1950–2016). Costello produced Chevron's recording of 'The captains and the kings' (1983) from Brendan Behan's 'The hostage', and the two later collaborated on other projects. In 1985 Chevron was invited by Murray to join the Pogues as a stand-in (having already produced some records for them), and he soon replaced Shane MacGowan as guitarist. He improved the band musically, playing banjo and mandolin as well as rhythm guitar, and sometimes took lead vocals in MacGowan's absence. The only band member who could match MacGowan in arguments about Irish literature and history, he later recalled that 'I had found a group of people to whom I felt instinctively I belonged for the first time in my life' (Clerk, 163). He contributed 'Thousands are sailing' to the album If I should fall from grace with God (1988), a song that links Ireland's post-famine exodus with that of the 1980s, and beautifully evokes the conflicting emigrant emotions of nostalgia, alienation and wonder. Often sung by Chevron, it became a highlight of the Pogues' live performances.

He remained in demand as a producer, notably on Bernelle's Father's lying dead on the ironing board (1985), and for artists such as the Dubliners, Ronnie Drew, Christy Moore, Steve Earle and Joe Strummer. Possessed of a strong social conscience, he regularly played benefit concerts for charitable and human rights causes. As a gay man, he particularly sought to raise awareness about AIDS and debuted the song 'Under Clery's clock' at an AIDS benefit in Dublin in September 1985 (released as a single in 1989). One of his most heartfelt songs, it vividly depicts a gay man's yearning for love in 1980s Ireland, where homosexuality was deemed a crime and its open expression risked insult or injury.

He continued to record and tour with the Pogues, writing 'Lorelei' and 'Blue heaven' for the album Peace and love (1989). However relentless touring and the accompanying heavy drinking wore down his already fragile health (he suffered from a recurrent stomach ulcer) and personal problems mounted. A keen supporter of Nottingham Forest FC, he was at Hillsborough stadium in Sheffield on 15 April 1989 when ninety-six Liverpool supporters were crushed to death, and was deeply disturbed by the harrowing scenes he witnessed. He also had to cope with his father's illness and the death of his partner Achim in 1992. His drinking spiralled out of control, wrecking his health and forcing him to leave the band in 1994. He came close to death and, after a second bout of liver surgery in January 1995 and six weeks in rehab, finally stopped drinking.

Anxious to reclaim his pre-Pogues career, he oversaw the release of two Radiators' compilations: Cockles and mussels (1995) and Alive-alive-o (1996). He also fulfilled a death-bed promise to his father, completing and publishing the latter's unfinished book, The lost theatres of Dublin (1998). Returning to the theatre, he composed music for several productions, including Terry Eagleton's 'Saint Oscar' (Field Day, 2003); Brendan Behan's 'The quare fellow' (directed by Kathy Burke for the Oxford Stage Company, 2004); 'Songs in her suitcase', a puppet show on the life of Agnes Bernelle (Project, 2004); and Sean O'Casey's 'The silver tassie' (Druid, 2010). In his spare time he travelled Europe and America to see new theatrical productions. He usually dressed theatrically, often resembling a Damon Runyan character, with a vintage suit, colourful tie and trilby. Behind the style, however, there was considerable substance: he was a diligent craftsman with an encyclopaedic knowledge of music and theatre, and was widely admired by his peers for his talent, intelligence and integrity.

He returned to the Pogues for a one-off tour in December 2001, and from 2004 for occasional festivals and Christmas tours. By then, he noted that most of the band were teetotal and primarily concerned with 'prostate glands and the need for stronger spectacles' (Clerk, 437). Chevron became the Pogue's unofficial archivist, overseeing the reissuing of their back catalogue on CD, and replying to fans on online forums. In 2004 he revived the Radiators and made two more albums with them: Trouble pilgrim (2006), featuring original material by himself and Holidai; and Sound city beat (2012), covering songs by admired predecessors such as Skid Row, Thin Lizzy and Horslips.

In 2007 Chevron was diagnosed with oesophageal cancer, but responded well to treatment and continued to work. However in August 2012 doctors discovered a new inoperable tumour. A moving testimonial concert, at which his inspirational influence was widely acknowledged, was held at the Olympia Theatre on 24 August 2013, with guest performers including Shane MacGowan, Terry Woods, Paul Brady, Mary Coughlan and Horslips, the actors Aidan Gillen and Fiona Shaw, and the writers Roddy Doyle, Patrick McCabe and Joseph O'Connor. O'Connor described Chevron as 'one of the greatest Irish songwriters of all time, certainly the best of my generation, an artist of a unique and absolutely compelling sensibility' (Ir. Independent, 8 October 2013).

Chevron died six weeks later on 8 October 2013 at the family home in Dublin, survived by his mother and sister. After a humanist service on 12 October at the Mansion House, his funeral procession departed for Dardistown cemetery to the sound of 'Thousands are sailing'. In keeping with his last wishes, in 2014 his three guitars were donated to Mountjoy prison for use by inmates, as part of the musician Billy Bragg's rehabilitative 'Jail guitar doors' programme.