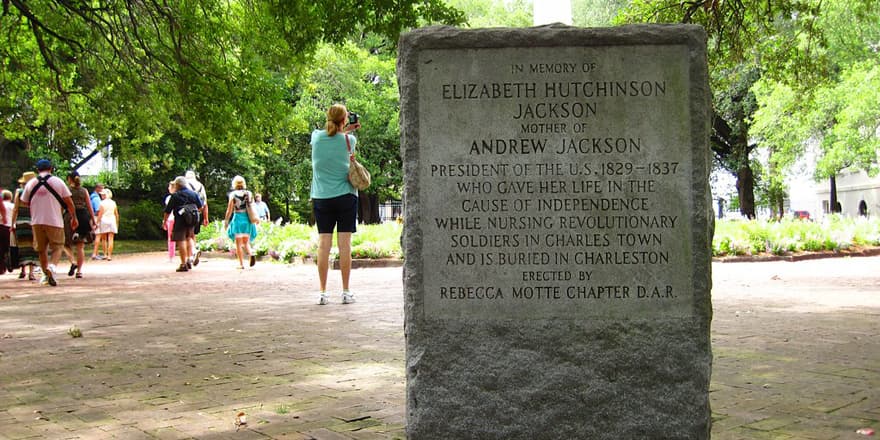 The DIB on the Fourth of July: First Mother

Read about the life of Elizabeth Jackson, the mother of America's seventh president, Andrew Jackson, who hailed from Co. Antrim, by Dr Linde Lunney.

Elizabeth Jackson (c.1740–1781), US patriot and mother of President Andrew Jackson, was born in or near the town of Carrickfergus, Co. Antrim. Her father's name was Hutchinson, but this is all we know for certain of her parents. Some sources claim that his name was Francis Cyrus Hobart Hutchinson. While there were several well-known, eighteenth-century Francis Hutchinsons/Hutchesons, multiple Christian names were not usual at that period, and the middle names of Cyrus and Hobart are virtually unattested in early eighteenth-century Ulster. In later life, Elizabeth Jackson reportedly talked of her father's voluntary service against an enemy force in Carrickfergus: it seems likely that this was the so-called 'invasion' of the town in 1760 by the French privateer François Thurot. A contemporary source lists a Mr John Hutchinson as one of the valiant defenders of the town, and this was possibly Elizabeth's father. Her mother may have been a Lisle, but more likely a Leslie, and thus would have been related to a Captain James Leslie, who took emigrants from Carrickfergus to South Carolina in 1755.

Passengers on this ship almost certainly included Elizabeth's five older sisters and their husbands (two of whom were Leslies, perhaps their cousins) and their families. They settled in an area that was known as the Waxhaws, in the backwoods of North and South Carolina. Left in Ireland, Elizabeth Hutchinson married Andrew Jackson, apparently in 1759, in the parish church in Carrickfergus, though the family later identified as presbyterian.

Though they may have suffered from rent increases and other financial impositions, such as anglican tithes, stories of the family's poverty in Ireland before emigration clearly derive from the American mythology of the poor backwoods boy becoming president. The Jacksons and Hutchinsons were well connected in Ireland, possibly related to anglican clergy, and fairly well-to-do. (In 1781 a Carrickfergus relative left the young Andrew Jackson a substantial legacy of over £300.) Elizabeth and her sisters were all literate. Andrew and Elizabeth Jackson sold their property in Carrickfergus, possibly including an inn, and emigrated in 1765 with their two infant sons and with Elizabeth's only brother to join her sisters and scores of former Antrim neighbours settled in America.

Poverty and misfortune were waiting for them on the poor land in north-west South Carolina. Andrew Jackson, too late to secure a better property, took up 200 heavily wooded acres and struggled alone to clear the land and build a cabin. In February 1767, aged just 29, he died following an accident involving a heavy log. His widow, in the last month of pregnancy, had no other support and had to move in with one of her sisters. Three weeks later, on 15 March 1767, Andrew Jackson junior was born and faced a very uncertain future. Elizabeth Jackson's sister Jane Crawford and her husband James Crawford gave them a home. Elizabeth was involved in all the work in the house and farm, as her sister was an invalid, and she helped raise her nephews as well as her own boys.

When the stirrings of revolution came in the early 1770s, the family were ardent supporters of the patriot cause, all the more so after open warfare broke out in 1775. Elizabeth Jackson is said to have helped nurse wounded rebels after a skirmish in the Waxhaws in 1780. Her oldest son, Hugh, died of heat exhaustion fighting the British at Stono Ferry in coastal South Carolina in 1779, and the two younger sons, still in their early teens, immediately joined the rebel forces. They were taken prisoner in their aunt's house, which was then pillaged by the British. Both young Jacksons were wounded, and both also contracted smallpox in the prison camp at Camden, South Carolina. Elizabeth Jackson negotiated a prisoner exchange to secure the release of her sons, travelling forty miles with two horses to bring the boys back. Andrew was on foot, without coat or shoes, and badly malnourished. The older boy, Robert, died two days after the return to the Waxhaws. Elizabeth nursed Andrew for weeks, but, when he was recovering, she left him to travel 160 miles, through wartime conditions, to Charleston, South Carolina, to try to find her Crawford nephews.

After only a few days visiting and nursing prisoners on the prison ships in Charleston harbour, Elizabeth Jackson contracted fever and died in November 1781. Andrew learned of his mother's death when he received a small bundle of her possessions, perhaps including a small Bible she habitually carried. From the age of 14, he was on his own. He remembered her principles and precepts throughout his life (though not always living by them), and remained bitterly antagonistic to the British.

Andrew Jackson later tried to find where his mother was buried, so that her remains could be brought to rest in the graveyard of Waxhaw presbyterian church beside his father and brothers, but her gravesite had been lost. Three later memorials in Charleston and Waxhaw, erected by the Daughters of the American Revolution and others, preserve the memory of Elizabeth Jackson's contribution to American history.

The family's anti-British sentiment could have derived originally from Elizabeth Jackson's experiences in Ireland, or from maltreatment in America. Either way, it poses a clear ideological difficulty for twenty-first-century unionist Ulster-Scots who might seek to adopt President Andrew Jackson as 'one of their own'.

Image: "elizabeth jackson historical marker" by happy via is licensed under CC BY-NC-ND 2.0