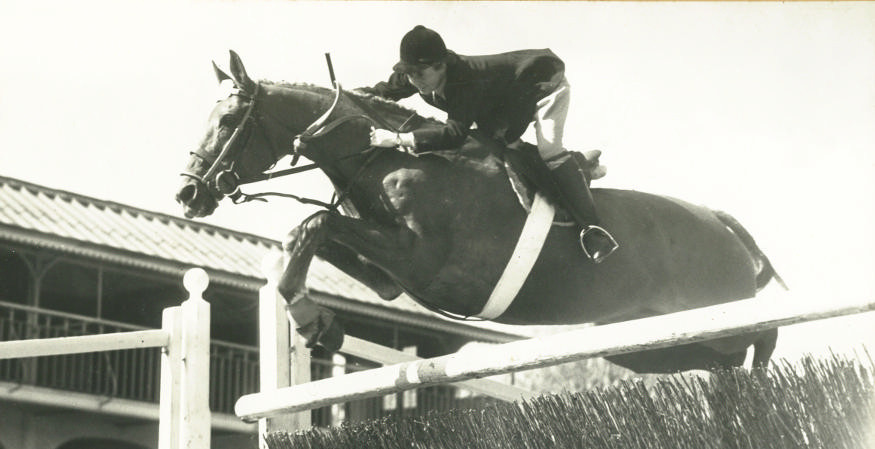 To mark the start of the 2019 Dublin Horse Show and an exhibition celebrating 100 years of women showjumpers at the RDS, we are publishing the DIB entry on Iris Kellett, one of Ireland’s most celebrated, and decorated, equestrians.

Iris Kellett (1926–2011), showjumper and horse trainer, was born on 8 January 1926 in Lower Baggot Street, Dublin, the only child of Thomas Kellett, of Mespil Road, Ballsbridge, and his wife Julia (née Maron). Her father was a veterinary surgeon who, after service as a British army captain in the veterinary corps during the first world war, became managing director of his family's drapery business in South Great George's Street, Dublin. A keen huntsman and point-to-pointer, he bought the old British army cavalry academy at Mespil Road and opened a riding school there in 1923.

Born into a Church of Ireland family, Iris attended school at St Margaret's Hall, Mespil Road, and delighted in jumping ponies and horses over the formidable array of natural obstacles built by her father on the family property, a four-acre oasis of greenery enclosed by Dublin's suburbs. In 1936 she first competed at the nearby RDS arena, winning a silver hunting crop as the best girl pony rider at the spring show. Riding from childhood at agricultural shows and on hunts, she was a budding point-to-point jockey before switching to showjumping after her first horse suffered a bad accident.

The Kellett riding school, which had lapsed, was reopened (c.1939) once Iris could help by instructing children and teenagers. She ran the school in her mid teens when both her parents fell ill, and upon finishing her secondary education eschewed a TCD science course in favour of passing the instructor's examination for the certificate of the Institute of the Horse in London in 1945. The Kellett school began training riders and horses for showjumping under her influence as chief instructor.

Exhibiting a drive and grit that contrasted with her elfin physique and femininity, she was an uncanny judge of distance and stride, and nursed her mounts measuredly along before vigorously inducing well-timed leaps. She was Ireland's leading woman showjumper by 1945 and, in partnership from 1946 with her half-bred chestnut gelding, Rusty, blazed a trail for civilian amateurs of both genders in a period when military specialists dominated Irish showjumping. A hunter and former plough horse, Rusty was a showjumping novice at eleven years of age in 1946, but responded magnificently to her training and horsemanship. 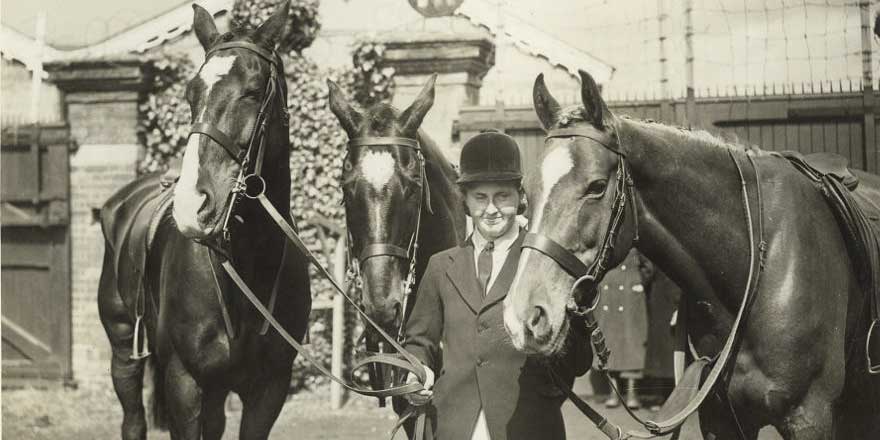 In 1947 Kellett was chosen for the Irish civilian team, and in her first competition abroad she and Rusty adjusted readily to the larger and more varied obstacles predominating outside Ireland and claimed the British Showjumping Association's national championship at the Blackpool show in England. Serial RDS winners at the spring show and the horse show, they bested army teams from six countries in winning the horse show's main international competition in 1948.

As countries participating in the International Horse Show at White City, London, had to pick a female rider, in 1949 she became the first civilian to accompany the Irish army team abroad, though she was restricted to individual events. In ten starts on Rusty at White City during 1949–51, she was unplaced once and won six competitions, including the Selby Cup (for British and Irish riders) in 1950 and 1951, and Europe's most prestigious women's event, the Princess Elizabeth Cup, in 1949 and 1951. They jumped flawlessly throughout three years of competition in the Princess Elizabeth Cup, coming narrowly second in 1950 due to a time penalty, and did not incur any faults over three events at the 1951 International Horse Show.

Time being irrelevant in Irish events before 1951, Kellett often struggled for speed, but going last in the jump-off for the 1951 Princess Elizabeth Cup and needing a fast round, she galloped Rusty around the course, hazardously cutting corners and vaulting him over fences early and from improbable angles. Following this thrilling victory over stiff international competition, Rusty reared during the award ceremony and knocked Kellett into Princess Elizabeth, who stepped smartly aside. A steward commented on Rusty's apparent republicanism, and Kellett noted that British royalty subsequently presented equestrian trophies from the stand.

She also went with the Irish army to the Horse of the Year Show at Harringay, England, in 1949–50, winning the Diana Stakes competition for women riders on Rusty in 1949. On her second-string horse, Starlet, a short-striding mare, she rode to a level many thought unattainable, winning four events abroad and shared first prize in the civilian and military competition at the 1950 Dublin horse show. In her 1947–51 pomp, she was the leading woman showjumper in Britain and Ireland, and a crowd favourite in both islands, but was barred from Ireland's Nations Cup team because civilians were ineligible until 1963, and from the Olympics because women were ineligible until 1956.

A freak fall during a jumping exhibition in April 1952 shattered her left ankle, after which she contracted two excruciating and near fatal bouts of tetanus: it was doubted whether she would walk again. (This experience later made her the prime mover in Ireland for providing riding courses for the disabled.) She was riding again in just over a year, and in September 1953 participated in her first event since the accident, being sufficiently undaunted to go on and break her leg, shoulder, wrist and ribs. It took her five years to reach international standard and ten to recover fully, excepting a slight limp, even after which she never recaptured her earlier heights, as the paucity of prize money in Ireland and the tempting sums offered by foreign buyers led her to sell many promising novices. She was an astute breeder and purchaser, owning the mounts that she rode competitively.

Thriving off its proximity to Dublin's embassy belt and equestrianism's growing popularity, by the mid 1960s her riding school and associated stable livery entailed responsibility for some forty horses, twenty staff, and 200 to 300 pupils of all grades. She preferred to train young horses and those riders seeking to pass the instructors' exam, while making a point of supervising an unruly recreational class composed of wealthy businessmen and government minister Charles Haughey. Furthermore, she ran the Eblana bookshop in Grafton Street with her husband, Benedict Brennan, a former publishing company sales representative with a yen for hunting and horse breeding. They had married in London in 1952.

Her patient cultivation from the mid 1960s of an improving string of young horses, particularly the obstreperous Morning Light, allowed her to finish her riding career with a flourish. On Morning Light, she was chosen for Ireland's 1968 Olympic team (but decided against going) and for Ireland's Nations Cup team in 1968–9, impressing at the 1968 Dublin horse show with two clear rounds in the Aga Khan Cup. Their greatest victory, albeit against a weak field of six, came at the 1969 Dublin horse show when they won the ladies' individual European championship.

Kellett retired almost immediately from serious showjumping to focus on her school and on improving the amateurish horse training and rider instruction pertaining in Ireland. In 1972 she helped establish, and later served as chairman and president of, the Association of Irish Riding Establishments, which sought to impose minimum standards on the equestrian centres then proliferating. Contending that rough handling ruined too many Irish horses, she learned from her father how to maintain her horses' general health and also a gentle way of breaking and training them.

Professionally polite while dealing with riders pursuing a pastime, she was exacting towards those preparing for competition and to become instructors, inculcating a thorough grounding in the classical style: 'balance and heels down and head up and just being in the middle of the saddle' (Sunday Independent, 12 August 2001). Her most famous pupil, an initially rough-edged and unreceptive Eddie Macken, blossomed into Ireland's all-time greatest showjumper after benefiting from her strict tutelage and top-class horses.

Operating one of the two private yards in Ireland prepared to resist foreign offers for its best prospects, she led Ireland's international showjumping revival. This began with Macken's near-miss in the 1974 World Cup on Pele, and continued the next year when his replacement at Kellett's stable, Paul Darragh, won the 1975 Hickstead Derby on the same horse. Darragh, whom she had taught as a boy, was in turn succeeded in 1977 by her second husband, John Hall, an English riding instructor fourteen years her junior. They married in 1977, two years after her first husband's death.

The heavy traffic around Mespil Road deterred clients, so in 1972 she sold what had become a valuable site for a reported £750,000 and bought a ninety-one-acre farm at Kill, Co. Kildare, where she developed one of Europe's finest equestrian centres. The mainstay of the Irish equestrian industry, especially for breaking horses and producing qualified instructors, Kill drew students from around the world, including European, Moroccan and Middle Eastern royalty, and eventually comprised stables for eighty horses, accommodation for staff and forty students, a restaurant, two indoor riding schools, a viewing stand, an outdoor arena and a cross-country course.

Moving the school to Kill in August 1974, Kellett and her long-serving staff efficiently supervised this far larger operation, though its scale and rapid growth prevented her from giving the horses her accustomed attention. Her showjumpers' relative lack of international success from the late 1970s is also attributable to the roaring trade she enjoyed selling horses to rich Arabs. She lucratively hosted and trained an Omani police unit as well as a previously hapless Kuwaiti showjumping team, which then won gold, silver and bronze medals at the 1982 Asian Games.

Lauded by farmers for promoting the indigenous horse, and a world-respected authority on breeding and training, she was appointed a director of the state non-thoroughbred horse board, Bord na gCapall, in 1976, and was active in the Show Jumping Association of Ireland, chairing various committees. Her long-nurtured ambition to sell the Kill facility to Bord na gCapall for use as a national equitation centre was undone by Bord na gCapall's bitter internal divisions, from which arose a leak that misleadingly suggested the near-bankrupt state was funding the projected £860,000 deal. Soon after the government vetoed the purchase in September 1982, she was one of five Bord na gCapall directors to resign in protest over irregularities concerning promotional expenses and the vetting of stallions for the breeder's register.

Incapable of giving the by-then unprofitable Kill facility the requisite commitment and investment, she sold it in 1988 for a reported £750,000 and vacated the premises in spring 1989, continuing with a smaller riding school at her farm in Daffodil Lodge, near Naas, Co. Kildare. In 1990 she separated from her second husband; both her marriages were childless. She was inducted into the Texaco Sports Hall of Fame in 1997 and received an honorary doctorate from UL in 1999 for her assistance in developing its equestrian science degree course.

Latterly afflicted by Alzheimer's disease, she died on 11 March 2011 in Craddock House Nursing Home, Naas, Co. Kildare, and was buried in Mount Jerome cemetery, Harold's Cross, Dublin. Her will disposed of €1.75 million. As well as gaining international repute, often in competition with men, when hardly any Irish sportswomen had ever done so, Kellett contributed more to Irish equestrianism than any other individual in its history.

The exhibition, 'From the field to the arena: A century of women's show jumping at the Dubiln Horse Show', runs until 13 September at the RDS Library.