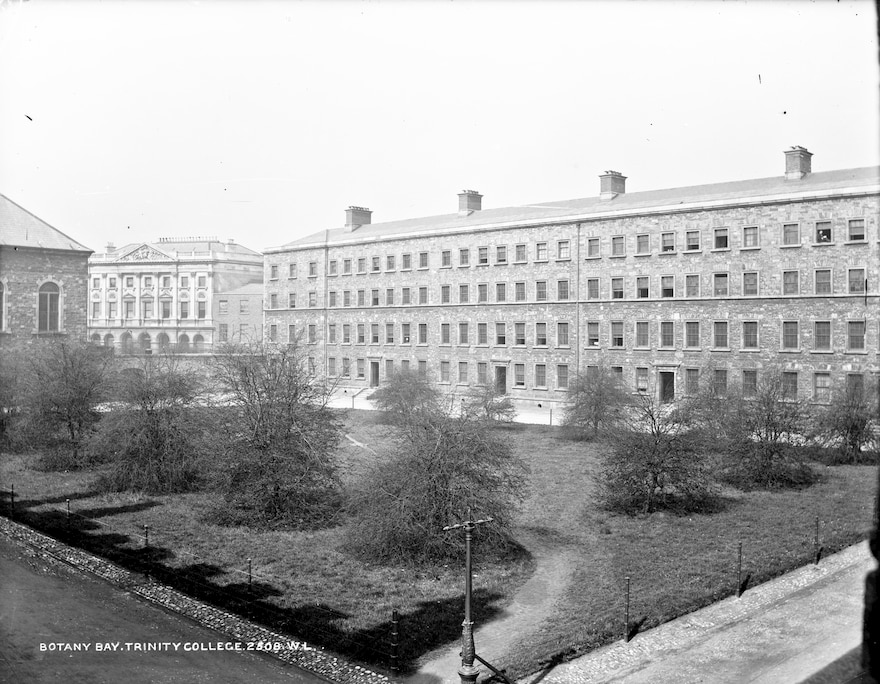 The DIB and Rugby World Cup 2019: the 'father of Irish rugby'

To mark the start of the 2019 Rugby World Cup, we publish below the DIB entry on Sir Charles Burton Barrington (1848–1943), integral to the establishment of Rugby Football in Ireland, by Shaun Boylan.

Barrington is credited with being the father of Irish rugby, and during the 1920s and 1930s he corresponded with Trinity academic Edward John McCartney Watson (d. 1947), who was then carrying out research into Dublin University's older sports clubs. Dublin University Football Club (DUFC) existed as early as 1854; when Barrington entered TCD in January 1867 there was what he described as ‘a rugby of sorts’, but with few formal rules and no designated kit. As an Old Rugbian he had played the sport according to the rules produced by that school in 1846, and throughout his correspondence with Watson he took much credit for the formalising of the game within Dublin University, and by extension throughout Ireland.

According to Barrington it was in 1867 that he and R. M. Wall, the honorary secretary of DUFC, met in the latter's rooms in that part of Trinity known colloquially as Botany Bay in order to lay down the rules by which DUFC would conduct its matches. He first captained the club during the 1867–8 season, and retained the post for the following two seasons. At the subsequent AGM it was announced to the members that the rules had been forwarded to other clubs in the hope of spreading uniformity. In reality they were almost identical to those of Rugby School, with the important difference that the DUFC rules outlawed what was known as hacking. Under the Rugby rules, when there was a scrum the forwards remained standing and attempted to win the ball by hacking at the other side. Under the DUFC rules, the forwards crouched in a formation similar to that used in the modern game and attempted to win the ball by hooking.

Barrington also told Watson that he and Wall later (1868) decided on the introduction of a formal kit for the team, and that it was they who introduced the black and red colours of the jersey and the wearing of knickerbockers. The kit was ordered from Rugby and, following the formation of a second XV, a cap bearing the colours and a gold shamrock was introduced for the first XV. Barrington also helped to formalise positions and differentiate between forwards and backs by introducing the positions of full back and half backs. He appears in the earliest known photograph of DUFC rugby team, taken in 1867, as well as in a photograph taken during his last season (1869–70) as captain of the first XV.

As well as being a rugby player Barrington was an accomplished oarsman. He competed in Trinity's first Henley regatta in 1870 and continued to do so with much success for many years. In 1876 he and his brothers William, Croker, and John represented Ireland and Dublin University Boat Club (DUBC) at the Philadelphia International Centennial Regatta, where he stroked the DUBC boat to victory.

In 1876 the Barrington family held more than 9,400 acres in Co. Limerick and was popular throughout the county. Barrington himself was DL, JP and high sheriff (1879). In 1899 his unionist politics denied him election to the first Limerick county council, although at this time he did avow support for a catholic university. In 1901 he was commissioned as an officer of the Limerick City Royal Field Reserve Artillery. During World War I, aged sixty-seven, while attached to an Anglo-American unit serving with the French under Castlemain, he drove a field ambulance in France, for which he was awarded an MBE in 1919. A life governor and joint honorary secretary of Barrington's Hospital, founded by his grandfather Joseph Barrington (qv), he was the provincial grand master of the freemasons of North Munster and the first president of the Limerick Amateur Athletic Bicycle Club.

Early in 1921 the IRA accidentally shot dead Barrington's daughter, Winefred Frances. Shortly afterwards the family left Ireland to live on their Hampshire estate, Fairthorne Manor, Botley. In 1925 Barrington offered Glenstal castle to the Free State government as a residence for the governor general, but its distance from Dublin and the prohibitive cost of its upkeep compelled W. T. Cosgrave (qv) to decline the offer. The following year Glenstal was sold to Mgr James Ryan, a former president of St Patrick's College, Thurles, for £2,000. Ryan later offered the castle and grounds to Benedictine monks from Maredsous abbey in Belgium for the founding of a community.

Barrington married Mary Rose Bacon, the youngest daughter of Sir Henry Hickman Bacon, baronet. They had two sons and a daughter. He died 12 August 1943 in Hampshire.