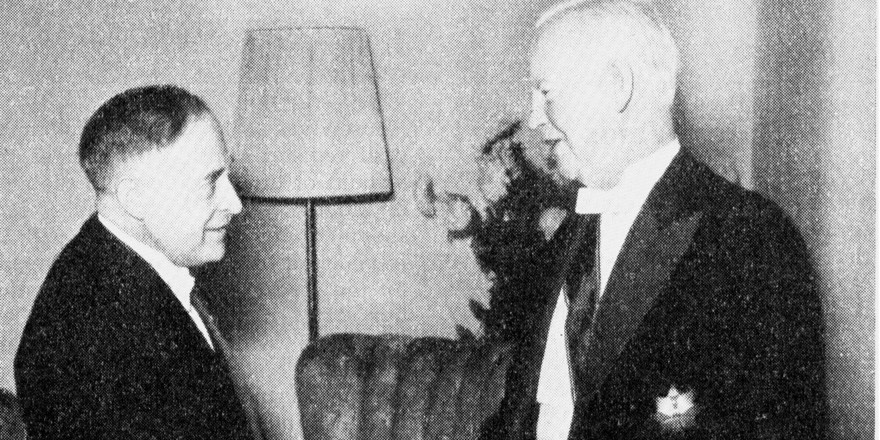 The DIB and DFAT100: William Warnock

To mark the publication of Ireland: A voice among the nations, read about William Warnock below, Ireland's first ambassador to India.

Following on from Kate O'Malley, Dictionary of Irish Biography lecture on 26 September  'Radicals to statesmen: relations between Ireland and India' read more about Ireland's first ambassador to India.

William Warnock (1911–86), diplomat, was born 22 November 1911 at 59 Tritonville Road, Sandymount, Dublin, eldest of three children of Frank Warnock (1882–1961) and Susan Warnock (née Twamley). He was educated at the High School, Dublin, and TCD, where he was a scholar and a moderator in modern literature (Irish and French) and Celtic studies, and a doctor in laws jure dignitatis.

Warnock was a notable linguist, but ‘he wore his learning lightly; he utilised but did not parade his gifts as a linguist’ (Irish Times, 13 Aug. 1986). He was also awarded a higher diploma in education and spent a year teaching Irish at the High School before entering the Department of External Affairs as a ‘cadet’ (the entry-level position, later known as third secretary) in 1935.

Having fluent German, Warnock was appointed secretary of the Irish legation in Berlin in 1938. Following the resignation of Charles Bewley as minister to Germany, Warnock was appointed chargé d'affaires ad interim in the autumn of 1939. Under the External Relations Act, 1936, the British monarch was required to sign the credentials of Irish ministers to foreign countries. It had been expected that Dublin would send Thomas Kiernan to Berlin to replace Bewley, but with Britain and Germany at war this was not possible, as Kiernan's credentials could not be signed in London. Warnock thus remained posted to Berlin to March 1944, and so was the sole Irish diplomatic representative in Germany for most of the second world war. In this capacity he had often to deliver protests to the German foreign office after Luftwaffe aircraft bombed areas in the east of Ireland, most notably the North Strand in Dublin on the night of 30–31 May 1941, and following attacks by German aircraft and submarines on neutral Irish shipping.

On the evening of 22 November 1943 the Irish legation in Berlin was hit during an air raid. Warnock had been ‘putting the finishing touches to the October accounts’ (this and all quotes on the raid from NAI, DFA 353/21) when the raid began. He later wrote to Dublin that ‘nobody expected that anything special was in store for us’. However, the district was hit and the combined effect of an incendiary and a phosphorus bomb in the immediate vicinity of the legation set the building on fire. Assisted by a member of the staff and wearing a gas mask, Warnock attempted to save the burning building, at one stage hanging through an attic window operating a stirrup pump in a vain attempt to extinguish the flames. However, he only managed to save the embassy seals, a typewriter, and a few odds and ends; on his own admission, ‘we rescued practically nothing’. He did manage to rescue his two cars. Warnock spent so much time in the burning legation (at one point being reported missing) that he had to be treated for smoke inhalation. Despite his efforts, the building and its archives were destroyed; at least no one on the embassy staff was killed during the raid. After spending the night in the Tiergarten park and later at the German government guest house, the following morning, ‘black in the face and unshaven’, he walked to the German foreign office, where he was instructed to proceed to the emergency legation quarters at Staffhelde outside Berlin.

Replaced by Con Cremin in Berlin, Warnock returned to Dublin and served for three years as first secretary in the treaties, communications, and general section of External Affairs. In 1947 he was appointed chargé d'affaires in Stockholm, and in 1950 he was appointed Ireland's first envoy extraordinary and minister plenipotentiary to Switzerland. He held his post in Berne concurrently with appointment to Vienna (from 1952) to 1954; he returned to headquarters in Dublin in 1954 and served as assistant secretary to 1956. Seemingly destined to serve in central Europe, Warnock returned to Germany as envoy extraordinary and minister plenipotentiary in 1956, being promoted to ambassador to West Germany in 1959, in which position he remained till 1962. He returned to Berne as ambassador to Switzerland (1962–4), and was concurrently ambassador to Austria (a non-resident position) from 1963 to 1964.

Warnock became Ireland's first ambassador to India in 1964, serving in New Delhi till 1967. On being received by the prime minister, Jawaharlal Nehru, ‘in a quiet corner of the garden’ of the official residence, a meeting that took place exactly a month before Nehru's death on 27 May 1964, Warnock found him ‘feeble and aged looking’ and was ‘shocked’ to see him ‘looking so weak’. Nehru's sister, Mrs Pandit, a former Indian ambassador to Ireland, did most of the talking. Nehru only intervened to counter Warnock when the Irish ambassador commented that Dublin considered south-east Asia ‘one of the most important political areas today’, telling Warnock that Africa was the continent to watch. Otherwise Nehru ‘slumped back apathetically in his chair’ (quotes from NAI, DFA New Delhi embassy D1/6).

While at a bilateral level Warnock's duties involved trade promotion and developing cultural contacts, his political duties linked directly into the increasingly global reach of Irish foreign policy in the 1960s. He followed the India–Pakistan dispute, events in Tibet, and relations between India and the Soviet Union, and acted as a listening post on events in China (where Ireland did not have diplomatic relations). These were areas that were also central to Irish UN policy in the 1960s, so Warnock showed the importance of having a diplomat on the ground in a period where the development of the international media and increased multilateral diplomacy began to call into question the relevance of local ambassadors acting as political reporters.

In 1967 he was appointed ambassador to Canada. After the sudden death of his colleague William Fay, from 1970 to 1973 Warnock held one of the most senior Irish diplomatic postings as ambassador to the USA. He presented his credentials to President Richard Nixon on 17 March 1970. In keeping with the current views in Irish foreign policy Warnock told an American audience in 1973 that the Troubles in Northern Ireland were ‘the result of the population being split, not just on religious lines, but along political and economic lines . . . apply it to your own situation, if the Republicans were in power for fifty years and there was no way to dislodge them, there would be an awful lot of Democrats without jobs’ (Irish Times, 21 July 1986). In his final posting he was to return to Berne for the third time, as ambassador to Switzerland (1973–6) and concurrently Israel from 1975. In Sweden he was awarded the Gustaf V medal and in Germany the Grand Cross of the Order of Merit.

William Warnock retired on 22 November 1976, his sixty-fifth birthday. His diplomatic career had spanned forty-one years. Unusually, he spent only eleven of those years posted at headquarters, and on being posted to Bonn in 1956 he began a series of postings over twenty years that would take him away from Dublin for the rest of his career. He died in Ottawa, Canada on 27 July 1986. In an appreciation in the Irish Times (13 August 1986), Warnock's colleague Joe Shields wrote that he would be remembered ‘not only [as] an effective national representative but especially as a warm-hearted, cultured, and lovable human being’. Shields also wrote that Warnock was, and was happy to admit that he was, ‘a diplomatist of the old school. The virtues he most admired – and exemplified – were those of modesty, diligence, and fidelity.’