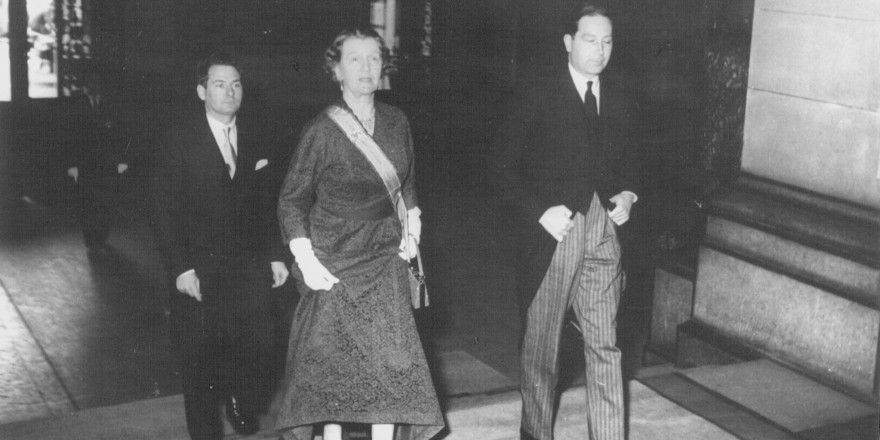 The DIB and DFAT100: Josephine McNeill and Mary Tinney

To mark the publication of Ireland: A voice among the nations and the current series of lunchtime lectures on Irish diplomacy, we're publishing the DIB biographies of Josephine McNeill (pictured above) and Mary Tinney, two of Ireland's first female diplomats.

Josephine McNeill (1895–1969), diplomat, was born 31 March 1895 in Fermoy, Co. Cork, daughter of James Ahearne, shopkeeper and hotelier, and Ellen Ahearne (née O'Brien). She was educated at Loretto Convent, Fermoy, and UCD (BA, H.Dip.Ed.). With a BA in French and German she began a teaching career, teaching at St Louis’ Convent, Kiltimagh, at the Ursuline Convent, Thurles, and at Scoil Íde, the female counterpart of St Enda's, established by her friend Louise Gavan Duffy. A fluent Irish-speaker with an interest in Irish language, music, and literature, she took an active part in the cultural side of the Irish independence movement. She was also a member of Cumann na mBan and in 1921 a member of the executive committee of that organisation.

She was engaged to Pierce McCann, who died of influenza in Gloucester jail (March 1919). In 1923 she married James McNeill, Irish high commissioner in London 1923–8. Josephine McNeill took reluctantly to diplomatic life, but it never showed in public. Her charm and intelligence were immediately apparent, and in a period when Joseph Walshe, the secretary of the Department of External Affairs, viewed married diplomats and diplomatic wives with disdain, McNeill was a noted hostess, both in London and later in Dublin, where James McNeill was governor general of the Irish Free State (1928–32).

A paragraph in her obituary in the Irish Times sought to separate the real McNeill from her official persona. The ‘immediate impression she gave was of a very mannered woman of the world’; but this was a mask which ‘concealed very considerable shyness as well as a protean nature. This apparently conventional woman, with the air of a hostess in a Pinero play, was an adventurous and romantic spirit. Possibly those who knew her in her Cumann na mBan days got nearer to the real woman than later acquaintances, when she had become an official hostess.’ Due to her position as the wife of the governor general, she ‘suppressed the rebel and produced the public servant.’

Josephine McNeill greatly resented the manner in which her husband was treated by Fianna Fáil when they suppressed the office of the governor general in 1932; yet, when minister to Switzerland later in her career, she put aside all differences with Éamon de Valera, who was in the country for an eye operation, and went to sit with him during his convalescence.

After James McNeill's death (1938), Josephine McNeill became honorary secretary of the council of the Friends of the National Collections and acted as chairman of the executive committee of the Irish Countrywomen's Association to 1950. She wrote on social, cultural, and economic issues, was a member of the Department of External Affairs advisory committee on cultural relations, and represented Ireland at the general assembly of UNESCO at Paris in 1949.

The foundation of Clann na Poblachta gave McNeill a new lease of life and she embraced working for the party with the enthusiasm of her Cumann na mBan days. In 1950 she was appointed minister to the Netherlands by the party leader, Seán MacBride, minister for external affairs in the inter-party government in 1950. She thus became Ireland's first female diplomat to be appointed in a ministerial capacity to represent the Irish state abroad. However, the career diplomats in the Department of External Affairs looked on this overtly political appointment poorly. McNeill's reports to Dublin from The Hague paid particular attention to the problems of Dutch decolonisation. She was appointed minister to Sweden in 1955 and held a joint appointment to Switzerland and Austria (1956–60), when she retired from public life.

She was a collector of porcelains and paintings and an amateur pianist, and in 1933 published Finnsgéalta ó India. Her Irish Times obituary considered that ‘there were several Josephines, the rebel who became a servant of her people, the musician, the art lover (she had real taste), the practical enthusiast, the feminist. All held under by a restraint which was misleading, because it suggested too much a concern for social activity.’ Yet it concluded that ‘she did more than any three or four women usually achieve. And yet she left the impression of one whose full potential – perhaps from unconquerable shyness – was never fully realised.’ Josephine McNeill died 19 November 1969 in St Vincent's Hospital, Dublin, and was buried in Kilbarrack cemetery. 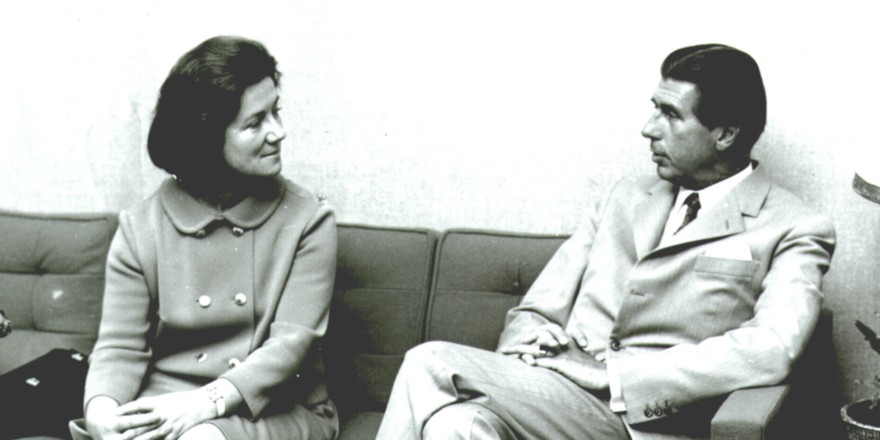 Mary Catherine Tinney (1924–2006), diplomat, was born on 15 February 1924 in Scotland, where her parents were living briefly. When her father, Eamonn Tinney, an income tax official, was posted to Letterkenny, they returned to his home county, Donegal; her mother, Winifred Tinney (née Reid), was a national school teacher from Co. Londonderry. Mary had one older brother and two younger brothers; the youngest was only a few months old when after spending 15 August 1928 at the seaside with the family, their father died after falling down a flight of steps in a grocery shop in Dunfanaghy. He had been a popular figure locally, active in the Gaelic League and a colleague of Louis J. Walsh in organising the 1927 Feis Tirconaill in Letterkenny.

Winifred Tinney's work as a teacher thenceforward supported her family. After a short time in Milford, Co. Donegal, they moved to Greenore, near Carlingford, Co. Louth, and Mary Tinney grew up there. She was a boarder in St Louis Convent, Monaghan town, before going to live in Dublin with her mother who was teaching in the Dominican convent in Ballyfermot, well known for her success in directing school choirs. Mary was an outstanding student and like the rest of the family had a great love of music; she played piano and double bass, had a fine mezzo-soprano voice, and won many prizes in singing competitions, especially in feiseanna. Her musical ability was such that she could have considered a musical career; even as an amateur, she appeared along with well-known artists like Bernadette Greevy, and from 1949 until the early 1960s she was frequently a soloist in concerts broadcast by Radio Éireann.

From 1942 Tinney studied French and German in UCD, performed in college concerts and plays, and graduated with an honours BA, winning a gold medal for her oral proficiency in French and German. She began an MA in economics, but stopped work on it when in an open competition she successfully obtained a post in the Department of External Affairs. The 1948 entry competition was, unusually, not subject to the provisions of the 1926 Civil Service Regulation (Amendment) Act, and thus for the first time women could apply; Tinney was one of three women recruited at the level of third secretary into External Affairs as the department expanded. This was the first time that women were appointed under the procedures that applied to male recruits; before 1948, Sheila Murphy, who for years was almost the only woman on the staff, was originally a private secretary, rather than a diplomat; and Josephine McNeill was appointed directly into post as head of a mission in November 1949, as envoy and minister plenipotentiary to the Netherlands.

A handful of women entered the department in the following decades, but few made careers in the diplomatic service; the marriage ban, which applied to all civil service posts until 1973, meant that only the unmarried could stay on to move up from entry level positions as third secretaries. By 1967 Tinney was one of three or four women working in External Affairs; both women appointed with her in 1948 had left, and after sojourns in London and Stockholm, she was the highest ranked female diplomat and was serving as counsellor in the mission in Paris (1963–70). Her work at that time as deputy head of Ireland's delegation to the Organisation for Economic Cooperation and Development, and as a member of a committee of ministers' deputies to the Council of Europe (1970–73), was of significance as the country readied itself for membership of the European Economic Community. In December 1971 she formally presented to the council the Irish government's charges of brutality in Northern Ireland against the British government. Tinney then served as secretary to the cultural relations committee in her home department in Dublin, and was one of the forty senior Department of Foreign Affairs officials assembled for a very significant conference on Ireland's foreign policy in April 1973; she was the only woman present.

In November 1973 she was selected to be Ireland's ambassador to Sweden and Finland, the first woman to have the full rank and title of ambassador, and in 1976 she was also accredited to Poland. In November 1978 she was sent as ambassador to Belgium, and she ended her career as ambassador to Kenya (1985–7). (She was also accredited to Tanzania, Zambia and Zimbabwe.) She retired in 1987, by which time she had become quite a well-known personality in Ireland and abroad, and was featured several times in newspaper interviews as a role model for women who wanted to have a professional career. (In the year before her retirement she was one of only two women at assistant-secretary level in the entire civil service, out of a total of ninety-four such posts.) Family associations also increased her public profile; her sister-in-law was Sheila Tinney (1918–2010), professor of mathematical physics at UCD, and a nephew and niece, Hugh and Eithne Tinney, have had notable musical careers. Mary Tinney had continued her musical training during her postings in London and Stockholm in the 1950s, and when she became ambassador, her grand piano, sometimes played by her nephew, featured often in Irish embassy soirées. She was also known in diplomatic circles as a very competitive golfer and bridge player, and she enjoyed these activities to the full during retirement. From 1996 to 1998 she was president of the UCD Women Graduates' Association.

She died unmarried on 22 November 2006, in Our Lady's Hospice, Harold's Cross, Dublin, after an illness.

Michael Kennedy is giving a lunchtime lecture on 'Women in Irish diplomacy' at the Royal Irish Academy on Thursday, 3 October at 1pm.