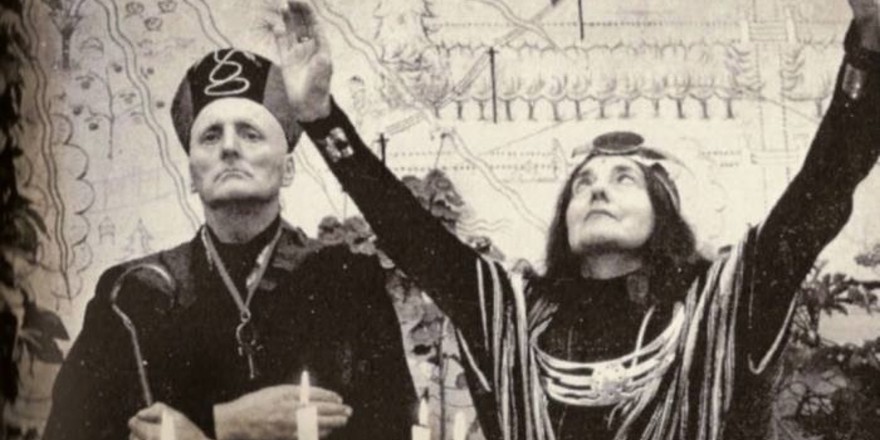 Read the DIB entries for the eccentric Durdin-Robertson siblings who established their own goddess cult in the bowels of Huntington castle in Carlow, and are among the subjects of a new exhibition 'Operating Manual For Spaceship Earth' at the Irish Architectural Archive.

Olivia Melian Robertson (1917–2013), writer, artist and co-founder of the Fellowship of Isis, was born on 13 April 1917 at St Mary's Hospital, Paddington, London, to Manning Durdin Robertson, urban planner and architect, and Nora Robertson (née Parsons), author and daughter of British army general Sir Lawrence Worthington Parsons. The second of four children, Olivia had two brothers, Lawrence Alexander Durdin-Robertson, Church of Ireland clergyman and subsequently priest of Isis (see below), and Esmonde Manning Robertson, historian; and one sister, Barbara. Her father was the founder and first president of the Irish section of the Royal Town Planning Institute and is regarded as the first serious critic and commentator on twentieth-century architecture and town planning in Ireland.

Olivia spent her first eight years in Reigate, a suburb in Surrey. In 1925 her father inherited Huntington Castle, the ancestral seat of the Esmonde family in Clonegal, Co. Carlow, and moved the family there. Built in 1625 on the site of a thirteenth-century abbey and reputed to be heavily haunted, the castle's visitors during Olivia's formative years included enthusiasts of the occult such as William Butler Yeats, Maud Gonne and George Russell. Amongst such company at this strange new home, the young Olivia felt the first stirrings of her spiritualist powers.

She returned to England in the 1930s to complete her secondary education at Heathfield School, Ascot, and then to attend the Grosvenor School of Modern Art, a private institution with no set curriculum that was open between 1925 and 1940 in London. Following the outbreak of the second world war, she briefly served as a voluntary aid detachment nurse in Bedfordshire before returning to Ireland, where she enrolled at UCD to study art history, winning a Purser-Griffith scholarship. She enjoyed some success as a practising artist, holding her first exhibition in 1938 aged twenty-one, as well as illustrating many of her own books from the 1940s onward. Her paintings would also adorn the temple of Isis later established at Huntington Castle.

Upon completing her degree in 1942, she worked for Dublin Corporation for four years as a supervisor on its inner-city playground scheme. She was deeply affected by the poverty and deprivation she witnessed, and wrote a number of essays about her experiences which appeared in the literary journals the Bell (1940–54) and the Dublin Magazine (1925–58), as well as the Times Pictorial (1941–55), prior to being published in her first book, St Malachy's Court (1946), which she also illustrated. This collection of deft character sketches was very well received, with the Spectator praising Robertson's ability to present the hardships of slum life, 'salted with such humour that you laugh as you read, even though a social condemnation is applied' (1 November 1946).

The publication of St Malachy's Court marked the start of a prolific decade as a writer during which Robertson produced the novels Field of the stranger (1948), which was awarded the London Book Society's Choice award, The golden eye (1949) and Miranda speaks (1950); and non-fiction works It's an old Irish custom (1954) and The Dublin phoenix (1956). She did not publish another book until 1975, when she released her spiritual autobiography The call of Isis, and thereafter she focused on writing liturgical material for the new religious movement she was developing.

Aware of her psychic abilities since childhood, Robertson experienced a 'spiritual awakening' at the age of twenty-nine, culminating in a series of visions revealing to her the feminine nature of god. She struggled to describe the events, saying it was like 'trying to explain colour to someone born blind or a symphony to someone who's deaf' (Telegraph, 22 November 2013). She was more articulate on the subject of her subsequent encounters with the Egyptian goddess Isis, however: 'She seemed to be made of crystallised white light. Her black hair was parted in the middle and she wore a violet and pale green dress, very modern, I thought. She seemed a cross between a queen, a ballet dancer and a gym mistress … We had a long conversation, but afterwards I couldn't remember any of it' (Telegraph, 22 November 2013).

Olivia would influence her elder brother Lawrence, who subsequently experienced his own spiritual revelation in the early 1950s, and gave up his Church of Ireland ministry to devote himself to developing their goddess cult. To that end, Olivia moved back to the family home in 1960, and together with Lawrence and his wife Pamela they formed the Huntington Castle Centre for Meditation and Study, which over time evolved into the Fellowship of Isis. In March 1976, Olivia, Lawrence and Pamela officially launched the Fellowship with the publication of its manifesto. It would be dedicated to the worship of 'Isis of 10,000 names', the female manifestation of all gods and goddesses. To join the Fellowship, one simply signed a declaration of support for its manifesto; members were not required to renounce any other belief system or religion they may have.

The castle's crypt was converted into a temple of Isis, complete with twelve shrines and five chapels (each consecrated to a different goddess). The Robertsons developed their own variations on ancient rites of Isis and other goddesses, which were elaborately conducted in the temple, with Lawrence wearing dark robes, a tall pharaonic headdress and carrying a crook, while Olivia would wear brightly coloured robes, crown her free-flowing hair with a gold disc coronet and carry her own ceremonial staff.

The siblings – the charismatic, witty and articulate Olivia in particular – became firm favourites of the media. During an episode of RTÉ's Agenda in 1973, Olivia displayed her skills as a medium, tuning in to the spirits around her and relaying her vision of the interviewer's future. Their aristocratic eccentricity combined with their willingness to be photographed and filmed made the Robertsons perhaps the most visible representatives of alternative religious movements in Ireland.

As leader of the Fellowship of Isis, Olivia undertook significant travel to conferences in England and Germany, was a regular speaker at the annual Glastonbury goddess festival, and visited temples and shrines in Egypt, Japan, Hawaii and elsewhere. In August 1993 she was invited to attend the World Parliament of Religions in Chicago. Representing the broader neo-paganist movement, she walked in the opening procession alongside Chicago's catholic cardinal, Joseph Bernardin. The Fellowship of Isis is thought have had 21,000 followers across seventy-two countries by 2012 (Crowley, 158). As it evolved over time, the founders created sub-societies including the Noble Order of Tara, which focussed on environmental activism, and the Druid Clan of Dana.

While Olivia never married or had children, she was a fond and involved aunt to her brother Lawrence's children in particular. Lawrence's wife Pamela died in 1987 and Lawrence in 1994, but Olivia continued to lead the Fellowship of Isis movement with great exuberance and energy for nearly twenty more years. She died, or 'transitioned to spirit', aged ninety-six at Wexford General Hospital following a short illness on 14 November 2013. Her funeral involved a private ceremony in the temple of Isis at Huntington Castle and a public Church of Ireland service and interment in the churchyard at St Fiaac's in Clonegal.

In its tribute to her, The Times (London) described Robertson as 'the last surviving link with the school of Irish mysticism which emerged during the Celtic Twilight and found its expression in the poetry of W. B. Yeats' (21 November 2013).

Lawrence Alexander Durdin-Robertson (1920–94), Church of Ireland clergyman and priest of Isis, was born in London on 6 May 1920, the elder son of Manning Durdin Robertson and his wife Nora (née Parsons), a connexion of the earl of Rosse. According to Burke, the earliest known Robertson of the line was John, lord of the free barony of Strathloch and known as Lord Strathloch, who lived in Scotland in the early 16th century; descendants lived in Orkney; the Irish connection was made in 1880 when Herbert Robertson (1849–1916), a barrister practising in England and later Tory MP for South Hackney, married Helen Alexandrina Melian Durdin (1855–1933), eldest daughter and heiress of Alexander Durdin (1821–92) of Huntington Castle, Clonegall, Co. Carlow. Lawrence Robertson was educated in Dublin at Baymount, Sandford Park and St Columba's College before entering TCD, where, however, his studies were interrupted by the second world war, during which he served in the Irish army anti-aircraft battalion (1940) and was employed as a civilian at the British Admiralty Research Laboratory, Bath (1942–5). Having resumed his studies he graduated BA (1946) and was ordained in the Church of Ireland (1948). He served in Ireland as a curate in the Maryborough Union (1948–51), then in Aghowle and Mullinacuff, Co. Wicklow (1951–2), before moving to England to be rector of East Bilney with Beatley in Norfolk (1952–7).

In 1952 Robertson had a revelation of the feminine aspect of God. Eventually he returned to the family home, Huntington Castle, to engage in farming, develop an interest in other religions and, with his sister Olivia and wife Pamela, to found the Fellowship of Isis (1976). Dedicated to the worship of goddesses of all kinds, it eventually attracted several thousand followers. In 1972 he was ordained a priest of Isis and by deed poll assumed the additional prefix surname Durdin. The castle became a centre for the cult of goddesses; its basement was converted into a temple of Isis, complete with twelve shrines and five chapels (each consecrated to a different goddess). To perform the rites of Isis, Durdin-Robertson would don blue robes, a crook and a tall blue pharaonic headdress. Using the imprint Cesara Publications, he published a score of books, pamphlets and manuals including The cult of the goddess (1975), The goddesses of Chaldaea, Syria and Egypt (1975), The goddesses of India, Tibet, China and Japan (1976) and God the mother (1984?). Olivia Robertson (b. 1917), the younger of Manning Robertson's two daughters, threw herself into psychic and spiritualist studies at an early age and in 1946 had a revelation of the femininity of God; an accomplished author in her own right, she achieved great success with St Malachy's Court (1946), which drew from her experiences working at Dublin city corporation playgrounds, and Field of the stranger (1948), the English Book Society's choice of the year; she went on to write six more books, the latest The call of Isis (1975). She was an important influence over her brother Lawrence and became a priestess of Isis.

The other important influence was his wife Pamela Mary, the extrovert only daughter of Major Maurice Edward Barclay of Brent Pelham Hall, Buntingford, Hertfordshire, a master-of-foxhounds. The couple married on 14 January 1949 and had a son and three daughters. On her death (1987) Durdin-Robertson lost, he believed, his psychic powers. Always known to his family as Derry (after the river flowing through Huntington), he was in his last years known as Lord Strathloch, the title of 21st Baron Robertson of Strathloch having been recognised at the Office of Arms, Dublin (7 May 1978); he was a gaunt figure, quiet, pensive and unconventional – he always wore a Scottish Robertson bonnet at table. Lawrence Durdin-Robertson died 4 August 1994 and received a Christian burial as well as an Isian funeral. His younger brother was Esmonde Manning Robertson (d. 1987).