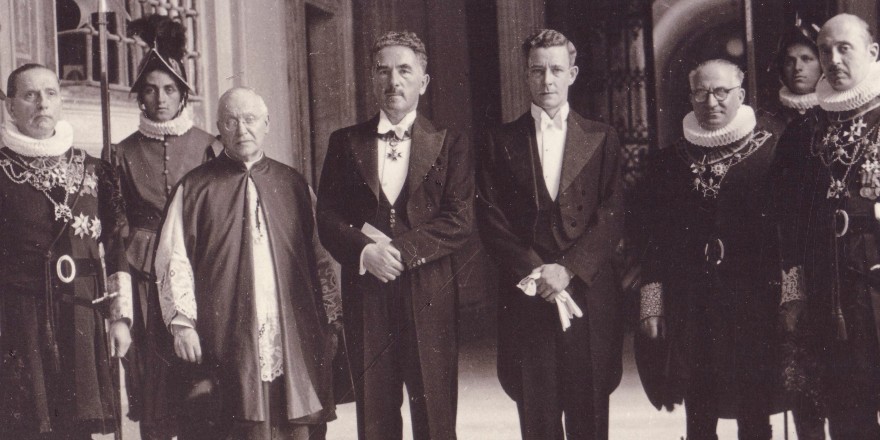 Another new 'mssing persons' entry to the DIB is Nicholas Nolan (pictured above holding gloves), secretary to the Government and secretary of the Department of the Taoiseach (1961–72). A painstakingly efficient bureaucrat, Nolan was sometimes lampooned as 'Meticulous Nicholas'.

Nolan began his education at the Victoria British School, Hong Kong. After his father died in January 1920 the family returned to Ireland, settling first in Cork. Nolan continued his education at the 'North Mon' Presentation College, Cork. He entered the civil service as an executive officer in the first open competition in 1925 and served in the Office of the Revenue Commissioners until 1932. During the later 1920s the Nolan family moved to Dublin.

Whilst with the Revenue Commissioners Nolan commenced studies in commerce at UCD, graduating with first class honours in 1931, taking first place in the year. He won a bursary in commerce and in 1932 was awarded an M.Econ.Sc. (first class) for the dissertation A Celtic exodus, or the Irish emigration. Nolan later obtained a Ph.D. in economics from the NUI in 1936 through a 429-page dissertation entitled The Irish emigration: a study in demography. It argued that an Irish government could, with the development of agriculture and industry, bring Ireland to its optimum population level. The linked topics of his dissertations were perhaps suggestive of his own family's departure from and return to Ireland.

Nolan moved to the Department of External Affairs in 1939 where he worked at headquarters until 1946 when he was appointed counsellor to the newly opened Irish Embassy to the Holy See where he served with Ireland's first Ambassador to the Holy See, Joseph P. Walshe. For personal and family reasons Nolan did not greatly enjoy being posted overseas. From very shortly after his arrival in Rome he sought, with Walshe's approval, a transfer to a domestic post, preferably a return to the Department of Industry and Commerce.

During his term as secretary Nolan was one of the powerful 'committee of secretaries' which oversaw aspects of government policy implementation and execution during the term of Taoiseach Seán Lemass. However unlike other members of the committee, Nolan was more concerned with the method of implementation of procedures within his department and often was consumed with the minutiae of departmental business.

Nolan's métier was managing the process and operation of the Department of the Taoiseach and ensuring correct procedures were drafted and rigorously implemented. Known for his hair-splitting style, extreme precision in drafting as well as his precise copper-plate writing, Nolan was gently lampooned as 'Meticulous Nicholas' and even 'Ridiculous Nicholas', having, according to one story, allegedly counted the number of strings on the Irish state symbol, the harp, on an official letterhead and returned the batch of paper as the incorrect number of strings had been printed for the harp in question. However others, such as Conor Cruise O'Brien, were more severe in their views; Cruise O'Brien describing his erstwhile colleague as a 'notorious martinet' in his memoirs (112), though in such terms as to make something of a virtue of Nolan's style.

Nolan was a painstakingly efficient bureaucrat, correct to the point of pedantry. He did not as a rule offer policy advice to the taoisigh he served, instead acting rather as a conduit for the implementation of the taoiseach's decisions and as a mechanism for the smooth facilitation of the business of government. On paper he appeared annoyed only if his amour propre was piqued or if a matter of specific organisational concern or departmental protocol irritated him. Otherwise he was the epitome of the anonymous civil servant. Yet Nolan's position meant that he often appeared in public with the taoiseach and on more than one occasion, (such as 22 December 1960 and 20 July 1961), his 'bland countenance' graced the front page of the Irish Times ('Backbencher', Ir. Times, 2 Sept. 1963).

Nolan was appointed a civil service commissioner in 1953 and a trustee of the Chester Beatty Library in 1968. He was awarded the Grand Cross of King Leopold II by King Baudouin of the Belgians in 1968.

Image courtesy of the NAI: Nicholas Nolan (holding gloves) next to Joseph P. Walshe, Ireland's first Ambassador to the Holy See, in Rome.