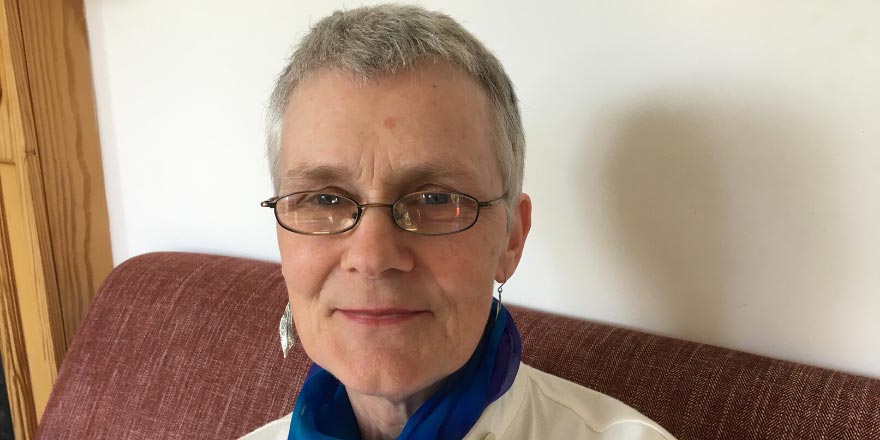 A blog post by Professor Máirín Nic Eoin, MRIA on the use of the Irish language in this time of acute crisis. Professor Nic Eoin hopes that the Irish language and the language community can continue to inspire communal efforts as we work our way out of the current state of emergency.

As an Irish speaker and a scholar of Irish literature and culture, an intriguing and strangely uplifting aspect of our world since early March has been the manner in which the Irish language has been drawn upon in the efforts to motivate, encourage, comfort and assure the population at large. The encouraging phrase 'Ní neart go cur le chéile' (‘Strength lies in solidarity’) and that pithy acknowledgement of human co-dependence and interconnectedness, 'Is ar scáth a chéile a mhaireann na daoine' (‘The people live in the shelter of each other’), often invoked by Irish speakers in times of adversity, have been used frequently over the past months by public representatives, journalists and community leaders, as well as in innumerable personal communications.

‘Is ar scáth a chéile a mhaireann na daoine’ serves as the title of a column in the online newspaper Tuairisc.ie, which provides information, news and reflections on life during the coronavirus crisis from and for Irish-speaking communities. A beautiful evocation of the philosophy – a master-class in solidarity – was provided by the people of Ballyferriter in the West Kerry Gaeltacht at an early stage of Covid-era funerals, when they demonstrated how a community can support one another through acts of physical presence and mindfulness even when the social rituals that normally ease the pain of loss are no longer possible. The whole community came out to mark Betty Ryan's final journey from church to burial place by lining the route, all the while maintaining the prescribed distance. Journalist Seán Mac an tSíthigh’s moving video report of the funeral, tagged with the phrase ‘Nuair is mó an gátar is ea is treise an pobal’ (‘The community is strongest in time of greatest need’) not only became a national news item, but was also taken up by the New York Times and by NBC News.

It is not just Gaeltacht or Irish-speaking communities that have drawn on the resources of the Irish language in recent times, however. As an Aer Lingus cargo plane was preparing for departure from Dublin on its flight to Beijing in late March to collect much-needed PPE, a message of gratitude from the Irish Aviation Authority concluded with a plea for a safe passage, ‘Bíodh turas sábháilte agat’. Perhaps the most dramatic use of Irish in a context that links it with crisis and extreme need can be seen in the outpouring of support following an online call for assistance on behalf of the Native American Navajo and Hopi communities, who are among the many marginalised groups around the world experiencing disproportionate suffering and loss of life due to Covid-19. Countless messages left by Irish and Irish-American donors on the gofundme website employ Irish-language expressions of compassion and gratitude, inspired by the solidarity with the Irish people shown by the Choctaw nation, when they made a generous donation from their own meagre resources to assist the victims of the Great Irish Famine in 1847.

The principles of human co-dependence and co-operation demonstrated in these messages echo the sentiments in the poem 'Dubhloch' by Seosamh Ó Murchú, a reflection on transnational solidarity dedicated to the Choctaw people. The poem invokes the words of Gandhi, ‘nárbh uaisliú ar bith/ Náiriú do chomhdhaonnaí’, which appear in English on a famine memorial in the valley of Dúloch (Doolough), County Mayo: ‘How can men feel themselves honoured by the humiliation of their fellow beings?’ Many other works of literature in the Irish language evoke similar sentiments and certain works seem to address aspects of our current predicament directly. The poet Seán Ó Ríordáin knew all about respiratory disease and the social isolation and acute vulnerability that accompanied it in the Ireland of his day. Much of his life was spent under the shadow of tuberculosis, and his poetry and diaries express a worldview that values attention, compassion and ethical responsibility as core human attributes. The poem ‘Ní ceadmhach neamhshuim’ (published in 1971, and translated by Peter Sirr as ‘Against indifference’) prefigures contemporary ecological concerns as it entreats us to be mindful of non-human as well as human life. The poem concludes with an exhortation to direct our capacity for loving and compassionate contemplation to the planet in all its aspects:

There’s no place, no stream, no bush
however remote, no stone
north, south, east or west
whose site we shouldn’t think of
with sympathy and fondness;
however far South Africa,
however high the moon,
they’re part of us by right –
there’s nowhere in the world
where we have not been born. (trans. Peter Sirr)

Despite the deadly effects of the current pandemic, and the long-term challenges it poses for societies all over the world, there have been some positive outcomes. Chief among these are the forms of learning it has enabled and the creative and compassionate human responses it has activated, at local, national and international levels. The traditions of 'comhar na gcomharsan' (co-operative work in support of neighbors) and 'meitheal' (working group of volunteers) have been activated all over Ireland. Restrictions on mobility have resulted in greater attention to the immediate environment and a sense of reconnection with the natural world. The national response to the crisis by an interim government has been caring and responsible. The central message has been that the dramatic and unprecedented measures demanded of us all are being taken in the interest of our most vulnerable citizens. On the international front, while massive global and regional inequalities exist, we have also witnessed unprecedented levels of co-operation between states. As American poet Carolyn Forché put it during the Cúirt International Literature Festival on 13 April, there is a fresh understanding that human beings, as a species, are united in their shared vulnerability.

What is worrying many people now is the uncertainty of what lies ahead. Transitioning to ‘more inclusive and sustainable economies and societies’ is a ‘colossal test’ according to UN Secretary General António Guterres. Recommending a recovery strategy based on science, solidarity and smart policies, he called for unity of purpose and ‘decisive, coordinated and innovative action from all, for all’. This call for global solidarity of purpose was also a central theme in Mary Robinson’s plenary address at the Royal Irish Academy’s International Affairs Conference on ‘The global politics of climate emergency’. In referring to the Covid crisis, she emphasised the importance of compassion and neighborliness, ‘the spirit of meitheal, in Ireland, but it is also there all over the world’. Empathy based on shared vulnerability can be the basis of a new spirit of co-operation but only if the need for responsible collective action across a whole range of social and economic spheres is successfully communicated locally, nationally and globally.

Communication about the pandemic has focussed in large part on mitigating the dangers to humans posed by the virus. Inevitably, health science disciplines have been to the fore in policy formulation and implementation. As the focus moves towards questions of economic recovery, it is important that awareness of the complex chains of causation that have led to the spread of zoogenic viruses become part of the public discourse. Science writer David Quammen reminds us  that humans are not merely victims of zoonotic diseases, but are also all part of an intricate web of responsibility. Human behaviour, consumer choices and lifestyle patterns – ‘all the choices we make: what we buy, what we eat, how much we travel, how many children we have, all of those things’ – need to be scrutinised if the shared political purpose is to search for more compatible and sustainable ways of living in harmony with other life forms. The environmental sciences clearly have a crucial role to play in educating the public and informing policy, but unity of purpose will only be achieved if the human dimension is addressed directly and comprehensively from the outset. The question of language itself – including the fragility of many of the world’s languages – should be part of the cross-disciplinary dialogue that will be required.

The Covid-19 crisis has foregrounded a number of policy issues related specifically to the Irish language. It has exposed the fragility of Gaeltacht communities due to their geographical remoteness and poor infrastructure. How can you work remotely, or avail of online services, if you do not have access to broadband? How do you make contact with loved ones by post if you no longer have a local post office? Due to unequal provision of bilingual supports, home-schooling is much more challenging for Gaeltacht families, as it is also for parents of children being educated through Irish in the Gaelscoil sector.

While the relative cohesiveness of Gaeltacht communities is an advantage in times of crisis, and traditions of self-reliance and co-operation have always helped compensate for lags in official support, there is a danger that the very resilience, patience and forbearance of these communities may lead to further neglect and decline. As we emerge from the present crisis, however, we have an opportunity to see language itself as part of a much larger ecological question.

From the earliest examples of 'dinnseanchas' (the lore of places) and nature poetry to the centuries-long association of good government and effective social relations with a flourishing natural world, Irish-language literature has given voice to ecological and environmental concerns. This tradition continues in the work of modern and contemporary writers, where it is linked to a global consciousness about sustainability. As critic and translation studies scholar Michael Cronin has argued, the language issue is now fundamentally an ecological one, as the future of Irish depends on respect for diversity, valorisation of the local and rejection of monoculturalism.

Something motivated people to turn to the Irish language in this time of acute crisis. One would hope that the language, and the language community, would continue to inspire communal efforts as we work our way out of the current state of emergency.