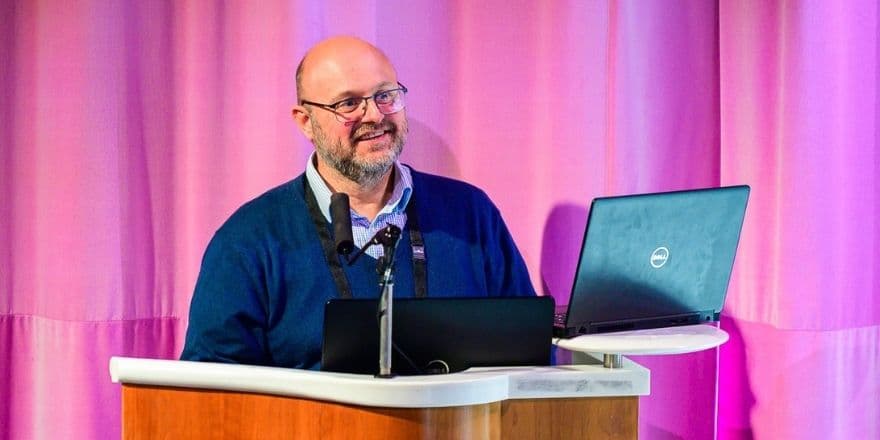 Professor Kitchin is a geographer who researches how digital technologies are reshaping urban life and how cities are managed and governed.

I am a geographer and I research how digital technologies are reshaping urban life and how cities are managed and governed.

Since the 1950s and the birth of digital computing, cities and the activities that take place within them have become ever more entwined with the digital. Vast amounts of real-time data are now routinely produced and acted on by a plethora of networked devices to mediate and augment everyday life—work, consumption, travel, communication, play and domestic tasks. The widespread embedding of computation into the infrastructure and management of cities, and how we undertake all kinds of tasks, has unfolded relatively quickly—ushering in the age of so-called smart cities.

Growing up in the 1970s and ’80s, I lived in a fairly analogue world. All of our household appliances and our car were electro-mechanical, with no digital components. My schoolwork was paper-based. If I wanted to discover information, I went to the library and searched through hardcopy books. I listened to music via the radio or by playing vinyl records or tape cassettes, and television consisted of three, then four, channels. Communication was by written letter and a landline phone. My friends all lived locally.

In the 1990s everything seemed to change. In 1991 my parents bought me my first personal computer. My university lecturers communicated with the class using email, and I could chat to my friends and transfer files online. I first accessed the worldwide web in 1993 and a year later invested in a modem to connect to it from home. I made my first online purchase in 1995. By 2000 the internet was having significant effects on business, governance and entertainment, and mobile phones were just starting to establish themselves.

I was fascinated by the changes taking place. My first published article, in 1995, was about the internet as a resource for geographical scholarship. My first book, Cyberspace, published in 1998, discussed the ways in which culture, politics, administration and the economy were rapidly changing with the roll-out of internet technologies. Two following books—Mapping cyberspace (2000) and the Atlas of cyberspace (2001)—written with long-term collaborator Martin Dodge, examined the geographic distribution and impact of the internet and the spaces created and encountered online.

In the early 2000s our attention turned to role of software and algorithms and how they worked to shape the production of space—how airports, supermarkets, offices, homes, and other locales functioned and were experienced. This research culminated in the book Code/Space: software and everyday life (2011). While software is one key element to digital technologies, data is the other, and in 2014 I published The data revolution, which examined how our interactions with computation was generating vast amounts of data that were being used to profile us and make decisions that affected our everyday lives.

This interest in software and data from a social sciences perspective became the focus of a European Research Council Advanced Investigator project, ‘The Programmable City’, which ran from 2013 to 2018. The research conducted sought to examine the recursive processes through which the city and its people and activities are encoded in software and captured as data, and how these software and data are then used to reshape urban life and how it is managed. Using two case-study sites, Dublin and Boston, and examining a number of different technologies and activities—traffic control rooms, smart bikes, smart lighting, emergency management, city dashboards, urban testbeds, civic hacking—we documented how smart urbanism was unfolding in practice.

What the project highlighted was the diverse praxes and politics underpinning the development, testing and roll-out of smart-city technologies, and the contingent and relational ways in which their effects are realised. In particular, it shed light on two related issues. First, it exposed the ethical, civil liberties, citizenship and governmentality concerns raised by using such technologies, and highlighted how they infringe on privacy, how they sort people socially and spatially, and how they seek to reshape and control people’s actions in specific ways. Second, it detailed the ways in which advocacy coalitions work to promote visions of the city that serve particular interests—by marketising city services and enacting a regime of technocratic governance—and how this is resisted by citizens and other stakeholders, creating an adoption gap. To date the project has produced a large number of publications, including thirteen books and dozens of papers and book chapters, which are available at: http://progcity.maynoothuniversity.ie/resources/publications/.

In addition, the research led to a related project, ‘Building City Dashboards’ (BCD), funded by Science Foundation Ireland from 2016 to 2020). In 2014, we launched the Dublin Dashboard (https://www.dublindashboard.ie), which displayed interactive visualisations of time-series data, including real-time data, and maps about the performance of the city across a number of themes (for instance, population, economy, transport, health, and environment). The aim of the BCD project was to conduct systematic and rigorous research on how best to create city dashboards. We paid particular attention to three core issues. First, data problems concerning processing, quality and archiving. Second, visualisation and interaction problems, and how to produce effective visual analytics; how to optimise them for different devices and platforms; how to create multi-modal displays, including 3D environments (virtual reality, augmented reality, and map projecting onto a 3D printed model); and how to improve user experience. Third, analytics/modelling problems, moving beyond visual analytics to perform data analytics, statistical modelling, predictions and simulations. In addition to reworking the Dublin Dashboard, we also developed one for Cork (https://www.corkdashboard.ie). We also made a commitment to use an open science approach, so that the data used and code produced would be openly accessible.

What both projects have made clear is that smart-city technologies are complex socio-technical assemblages composed of hardware, infrastructure, software and data, and whose development and operation is framed by a range of social, political, economic, governance, policy and legal factors. They work in contingent and relational ways, grounded in local contexts. They are full of politics with respect to their production, roll-out and use, and they raise a number of ethical questions. We are still trying to make sense of smart urbanism; the rapid roll-out of new technologies means the landscape is constantly shifting and new questions and concerns are arising. For example, my recent work involved considering the repurposing of locative media for tackling the Covid-19 pandemic and the civil liberties issues this raises (‘Civil liberties or public health, or civil liberties and public health? Using surveillance technologies to tackle the spread of Covid-19’, Space and Polity 2020, online first; doi: 10.1080/13562576.2020.1770587). My latest book, Slow computing, considers how we might lead more balanced digital lives.