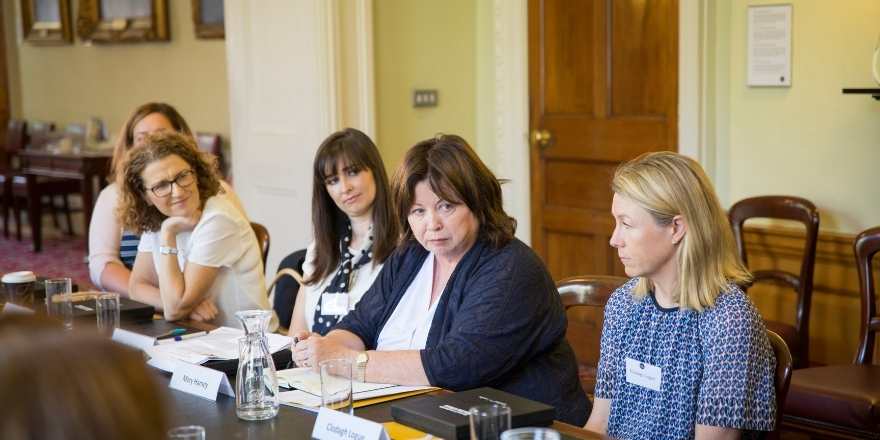 In July 2019 former Tánaiste Mary Harney delivered a Women in Leadership Masterclass at the Royal Irish Academy with the support of Accenture.

Mary Harney has had a long and distinguished career in politics, holding several ministerial positions including those with responsibility for environment, health and enterprise. She was the leader of the Progressive Democrats and she was the first female Tánaiste. When Mary retired from politics in 2011 (as the longest-serving woman in the Dail and Seanad) she felt the need to have things to do every day. She reflected on the skills she had developed in politics, including distilling large documents, communicating and working with people, and realised that they were transferable.

Mary spoke about being born in Galway and growing up in west Dublin as the eldest of five children. She encountered her first mentor in school, who saw that Mary had an aptitude for maths and business. At the time, honours maths was not on offer to girls at Mary’s school, so her teacher encouraged her to take honours maths lessons in Amiens Street. That experience showed her it was possible to realise goals if you put the effort in. She went on to study economics at Trinity College Dublin. She enjoyed debating, which gave her confidence in spite of being shy, and she became the first female auditor of the ‘Hist’ or College Historical Society.

At Trinity, Mary joined Fianna Fáil, where she came to the attention of Jack Lynch who later nominated her to run for election.That initial election campaign did not secure a seat in the Dail, but Mary was offered a seat in the Seanad, and she became its youngest member.

Mary faced a decision when the leadership and values of Fianna Fáil changed, and she decided that on the next issue she would vote with her conscience rather than the party.

She was a driving force in the founding of the Progressive Democrats, later going on to be leader although she never foresaw herself in that role.

Sometimes people gave her a hard time over the measures and bodies that she introduced. She advised the group that when faced with opposition from vested interests it is best to think about what is in the public interest, it's about excellence not convenience. Mary was also not really interested in scoring points, rather working towards common goals, accepting the amendments of others if it delivered a desired outcome and giving people credit where it was due.

She has concerns about social media and how it may put people (particularly women) off entering public life - she believes that had social media been around when she was starting out she might not have continued in politics. However, she notes a relatively high level of confidence among women in younger generations, which is to be welcomed.

Mary commented on how success is not always linear, that it is a continuum and that what she now regards as a success is getting to do the things that satisfy her and that she enjoys.

I particularly liked the fact that it was a small number of women, which meant you had opportunity to speak to almost everyone before or after the event. The informal atmosphere also led to very interesting and in-depth discussions. (Anonymous participant).