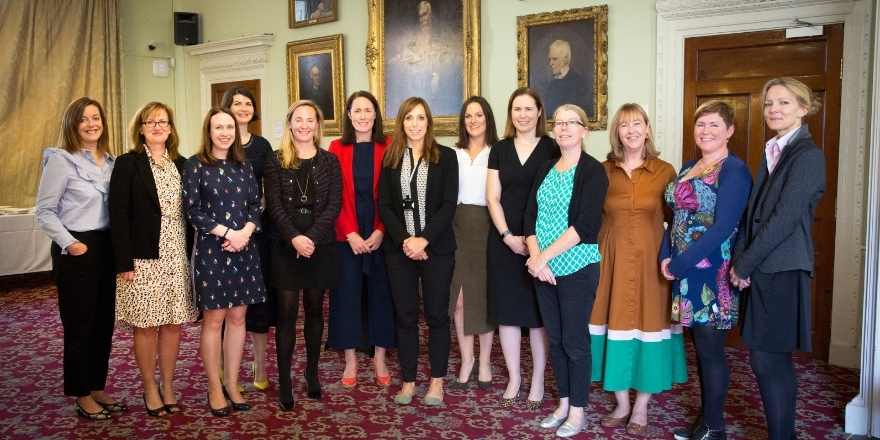 Barbara began the Masterclass by talking about her career and the various highs and lows along the way. Born in Northern Ireland she studied geography (at Exeter University) and from there she went to work in the Office of National Statistics for the UK.

In Barbara’s next job she learned from an inspiring boss who empowered his workers. If you did the work, you had to do whatever came out of the work, and that meant Barbara went on BBC Radio 2 to talk about cold weather payments (she was given media training to support her in this), and she argued with Michael Portillo about how to calculate such payments. That type of experience was terrifying, but when well supported it was also empowering.

Moving next to her ‘dream job’ was difficult at first but she spent a year building up that authority with her team. Once that was established, her years of work there were rewarding and challenging, and Barbara built up her confidence there.

Then she moved to Andersen Consulting (now Accenture), where she worked with other inspiring leaders and mentors. They included one mentor who ran through potential questions and scenarios with her ahead of meetings, so that she would be well prepared. Barbara also got advice on how to ‘work’ a room at meetings or networking events when she, the introvert, just wanted to stand in the corner or leave. Learning to sit forward at meetings, to make eye contact, she learned to be a good listener.

Barbara spoke about how events in her personal life made her acutely aware of the difficulties of living with a mental health condition. By co-founding Accenture UKI’s award-winning Mental Health programme, she instigated a highly successful campaign to support mental wellness at work in Accenture and enable more open and honest discussions so that people could be better supported.

The research carried out by Barbara and her team has shown the value to organisations of increased diversity and inclusion, that it creates a culture where innovation is more likely and where people will enjoy their jobs. They have identified key hallmarks of such organisations.

Barbara shared that as she has grown older, she has become more attuned to her own life, career, direction and ‘doing the right thing’, and the need to be kind and compassionate with people as you might have no idea about what is going on in their lives.

She encouraged everyone to take up the hard jobs - you learn more from them than the easy ones - and to balance out stress: some positive stress is motivating, but you need to mind your ‘portfolio’ of stress across your life, and not have too much in your basket at any one time. This is because, like physical health, you depend on your mental health and you need to take care of it.

She is also a fan of ‘reverse mentorship’ where younger colleagues advise more senior ones. This can be particularly helpful around issues of diversity, such as LGBTQ, and it helps to break down the barriers of hierarchy.

Women’s networks are strongly linked to women doing well in an organisation, and Barbara encouraged participants to join them or set one up.